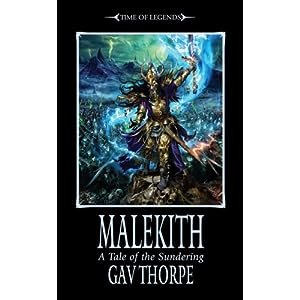 Description:
Passed over to succeed as king, elf general Malekith is wracked by jealousy and bitterness. Under the pretense of rooting out the pernicious cult of pleasure that is corrupting elf society from within, Malekith plots his revenge. When he betrays Phoenix King Bel-Shanaar and attempts to seize power for himself, Malekith triggers a tragic sequence of events that plunges the realm of the elves into a civil war from which they will never recover. Malekith begins the epic tale of the Sundering by Gav Thorpe, and continues the Time of Legends series.

Review:
Usually I review advance copies from BL, but this one I went and bought because I missed it previously and enjoyed The Shadow King [2], part 2 of The Sundering.
The subject of this novel poses an interesting problem – a challenge for the author as well as the reader, I found. For those unfamiliar with Warhammer lore, Malekith is a very dark character. Son of the Uber High Elf king Aenarion – who was at once great and terrible due to his drawing of the Sword of Khaine – Malekith is destined to become THE ultimate villain for the race of elves for millennia to come (along with his twisted mother Morathi). Knowing this the author has to tell a tale we will read. To do that, we have to somewhat sympathize with the main character; this is a tall order.

It is even harder considering that the prince Malekith is raised in the Shadow of his father and under the tutelage of his mother, trained from birth to bear a sword and one day be a king. Encouraged at every step to be proud of who he is and have a firm belief that he will be the heir to the Phoenix Throne. Let’s be honest; Malekith is not a sympathetic character. He’s pretty much an arrogant bastard. As we all know from reading the back flap, Malekith is passed over and Bel-Shanaar is chosen as Phoenix King.

Frankly, the story was a bit hard to get into — the first hundred pages took a bit of warming up to. Thankfully Mr. Thorpe has taken a character from an Army Book for a Miniatures War-game, and turned it in to a real living, breathing, believable character. I say believable because you can see what’s happening, know what is coming, and it makes sense in a coherent way that while fantastic, is consistent with the setting.

We get to see the young firebrand elf – full of himself – become tempered through interaction in the lands outside Ulthuan. You have to realize that this story is akin to the Silmarillion in many ways; in the Warhammer universe Elves long pre-date mankind: man is largely crawling out of mud huts at the time Malekith leaves Ulthuan. Dwarves are a young race and within living memory of their ancestor gods. Elves are almost like walking gods on the field, with armor, magic and weapons that legends are made of. This is really what the core of the whole Time of Legends series is about, and it does well.

One thing that Gav Thorpe has down to a science is the telling of a dark tale. I don’t know of any other Black Library author who really has the pulse of “The Uber Dark” like him. Gav tells a grim tale well and doesn’t need blood spatter, gore or shock value to get there. Granted, the cultists of Khaine and the pleasure cults are depicted well, but I think tastefully and not over-gratuitously (as I have seen in some depictions). One of the things that really sets the Warhammer Fantasy and Warhammer 40k settings apart is the unique DARKNESS of it. Maybe it’s a very British thing, built upon the darkness of the late 20th century. Maybe not. I know that it is one of the things that makes Warhammer unique, special, and Mr. Thorpe has it by the balls.

In the telling of Malekith, the reader rides the wave of the story, loathing the princeling, hoping for change, seeing him become wiser, understanding how he was raised, learning to sympathize with him and really hope he turns it around: hoping to blame someone else for his fall… which is inevitable. I hoped to blame the taint of chaos, his most wicked mother, the cults, the gods themselves. I wanted him to be redeemed and have his fall be due to an outside force. The ultimate failing the reader has to discover for themselves.

Again we as readers get to “see” beautiful vistas, magnificent epic battles of massive hosts of elves, and magical beasts. It’s truly awe-inspiring. It’s also nice to get to see the cast of characters really fleshed out. High King Snorri Whitebeard, Bel-Shanaar, Tethlis as well as characters that recur in The Shadow King (with which it dove-tails together perfectly).

Rating:
Starts a bit slow but makes up for it in the end. Think of it as a Warhammer-verse retelling of Star Wars Episode III sans the horrible George Lucas dialog/writing. (Actually, as I think about it, I’d love to see Ep. III redone by Gav Thorpe: now THAT would be brilliant!)