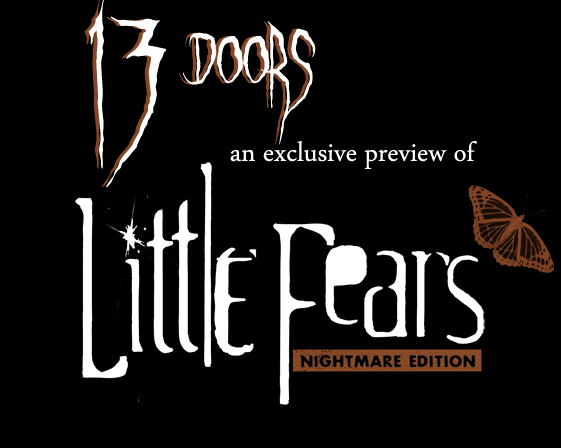 An exclusive look behind the door at the upcoming Little Fears Nightmare Edition – The Game of Childhood Terror.

Over eight years have passed since the original Little Fears debuted. The game quickly became a critical hit and a cult classic and accumulated a dedicated following who kept the game alive over the years through discussion and play. Their enthusiasm is no small part of why Nightmare Edition is finally seeing release.

When it came to designing the Nightmare Edition, I knew the fans would be amongst its harshest critics. I also knew that I wasn’t simply going to re-release the original edition with a new coat of paint. I attempted to balance what made Little Fears an engaging and unique game with the years of design experience I have accrued since putting together the original version all those years ago. Like anyone when they grow up, Little Fears has gone through a lot of changes over the years.

In the first of these 13 previews, we’re going to take a look at some of those changes. Upcoming previews will go into each of these in further detail so for now I’ll only touch on these briefly.

The most obvious change to the game is its system. Little Fears Nightmare Edition uses a new system, called the Top 3 System as its engine. While the original Little Fears system was fast and easy, it also required a lot of fudging and hand-waving when it came to things like making and fighting monsters. The Top 3 System is light, fast, and really drives home the central conflicts of the game.

Fans of the game will recognize some of the terms and concepts that return in the new edition. Qualities, for instance, and Virtues are still there though they act a little different.

Monsters are also better defined in the Nightmare Edition and they are a lot of fun to make. Some of the best feedback I’ve received from the testers is how much they loved making monsters—some spent entire sessions doing nothing but that!

Unlike its predecessor, Little Fears Nightmare Edition is designed for long-term play. While it will also make for a great one-shot or a mini-series of three to four sessions, it also makes for a compelling, dramatic ongoing series. The original system’s tendency to cause characters to spiral into unplayability is no more.

Another major change to how characters work is the advancement system. What we’ve designed will make playing a character from one session to the next fun and rewarding. Characters change and grow throughout play both as they age and as they use their abilities.

And character death doesn’t necessarily mean an end to the character anymore.

As far as the fiction of the Little Fears universe, there have been numerous changes in the Nightmare Edition.

The change folks will spot immediately is that there is no Demagogue anymore–and the Kings, which formed the evil backbone of the original edition, are gone as well. While certain Kings still exist in name and spirit, they don’t have titles and there is no hierarchy of rulers.

Another big change is the presence of hope. The original game was incredibly dark which was part of its appeal. And while the Nightmare Edition is still very much a horror game, it’s also a game about hope. There is a light in all that darkness and that light comes from the characters.

There are people and things other than the kids that can aid in the fight against monsters. The burden still rests on the shoulders of the young but they are not fully alone anymore.

For long-time fans of the property, some of these changes may seem arbitrary but not one thing was changed without careful consideration for what it meant to the game and the property as a whole. Little Fears Nightmare Edition was designed as the definitive horror game, especially in the realm of childhood terror.

As these previews continue, you’ll get a chance to see more about what makes Little Fears Nightmare Edition tick and what to expect when the closet opens later this year.

Thank you to everyone who has entered through the thirteen doors leading up to the release of Little Fears: Nightmare Edition. If you’re just starting your journey, here is a full list of previews for you to explore: