In December 2000, Fiery Dragon Productions released NeMoren’s Vault, one of the earliest adventures for Dungeons & Dragons 3rd Edition put out using their Open Game License. Part of the first wave of the D20 boom, Fiery Dragon went on to release another 70 products over a decade, before semi-retiring the brand in 2010.

Twenty years later, the original Fiery Dragon trio expanded a bit and rebranded as Platinum Dragon. They’ve just released NeMoren’s Vault 20th Anniversary Edition [1] on DriveThruRPG via the same Open Game License, this time updated for the 5E ruleset. James Bell, the original author of NeMoren’s Vault in 2000, reflects on this anniversary edition and some of the design decisions that went into the initial adventure.

CELEBRATION RATHER THAN RELAUNCH

One of the first decisions we made when talking about the 20th Anniversary version of NeMoren’s Vault was that we weren’t looking to have a re-do and use it as a way to launch a new RPG company. Instead, we were looking back on all the work we had done and all the fun we had, and wanted to celebrate those years and the accomplishments we had during that decade. We weren’t looking for a massive re-write or a complete overhaul of the adventure – we just wanted to update it, polish it up a bit, and make it available again as a celebration of those amazing early days of the Open Game License.

We’ve flipped over to Platinum Dragon as a moniker for this one and a few other projects. In some modern lists, platinum is the symbol to celebrate a 20th Anniversary, so we figured the revised name would allow us to acknowledge those early days while at the same time indicating that this is something different. We’re not back as Fiery Dragon and we’re not rebuilding the old machine. We just happen to be those same people (plus a few more) having some fun. 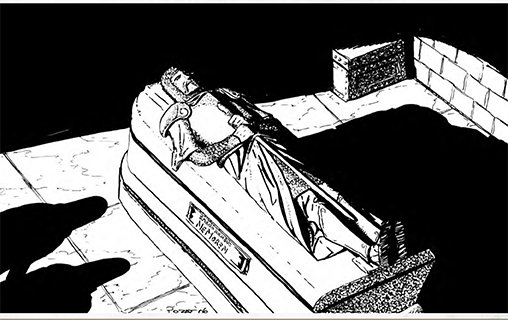 When NeMoren’s Vault came out, the majority of examples of how a fantasy roleplaying adventure were put together were from TSR for those first few editions of Dungeons & Dragons. Even though that seemed like a lot of products to think of as templates, there’s really not a wide variety there. I mean, there are probably more products released for 5E – and all editions, really – per month on DM’s Guild than there were in total back then.

One of the benefits we had when we first published NeMoren’s Vault in 2000 is that we had no experience in the industry. In a lot of ways, it was that naïveté that enabled us to release so many projects, and in so many different areas – we just didn’t know any better. If we had a better idea of the challenges, we probably would have just avoided the whole thing.

Since it was at the start of a new edition and new ownership, it felt like a lot of the initial D&D 3rd Edition groups were players that were coming back to the game after some time away. We wanted to write something that was familiar to those long-time fans – really, our contemporaries – but still do something different, or at least put a bit of an updated polish on it.

A lot of those early adventures that had inspired us – that we had played through in our teen years and given us a love of the game that brought us to the point of writing our own material for it – had started as tournament scenarios. A lot of those are written very formally, or at least present the information as “guidelines for a referee” rather than ideas for you to have fun at your table. In our initial release, we kept some of that tone, never addressing the reader directly, instead using phrases like, “Should the GM decide to increase the challenge…” or “At the GM’s discretion, the adventurer’s can find… .”

Though we weren’t looking to make any serious changes to the adventure as a whole, I definitely wanted to update some of that attitude with this release. Fifth Edition and much of the play in this iteration of the game have shown us that we can be more familiar and friendly, and can even directly address the reader rather than pretending we’re writing an instruction manual for an exclusive club.

NeMoren’s Vault would probably be different if it were created today. 5E and current players in general have embraced the fantastic – or maybe just focus less on the rules and more on the fun – than we may have in those early days of 3rd Edition. A lot of that was just the effort of learning and mastering a new system that was much more carefully thought out than previous versions, or at least not built of a dozen different independent subsystems. Third Edition had structure that hadn’t been present before, and we were excited to work within it. If I were writing this for the first time today, with 20 years more experience and a game that had evolved over those past 20 years, it might be a bit lighter, a bit looser, but I think the overall scenario and stories that come from it would be pretty consistent regardless of edition.

As I mentioned, a lot of those older adventures were for tournament play or designed to test your characters or even serve as one-off games. We wanted to reflect the launch of the new edition with an adventure that was specifically designed to start a campaign, something that gave your newly created characters a reason to get together and go on adventures, and maybe give them a sandbox to explore.

We’ve all had those adventures that started in a tavern, with someone recruiting the bold or foolhardy for an adventure. We wanted a different scenario, something a little less cliché. We used what we called “The Godfathers Method,” not in relation to the movies, but to the late-80s English band. One of their songs was a bleak track with a strong chorus – “Birth, School, Work, Death.” These are the common milestones in everyone’s life, so we wanted to visit them as starting points in our adventures. And thus, inspired by nihilistic tune from our teen years, NeMoren’s Vault starts with a funeral. What better way to get a group of strangers together than to have them all the unknowing beneficiaries of a dead noble’s estate.

We also tried to set the adventure in a fairly generic fantasy world with a few flourishes to add some personality. The idea was to make it “standard fantasy” enough that players could drop it in whatever campaign world they had decided to use or create without causing too much conflict, but also to provide enough detail so that they didn’t have to come up with all that info. It was there to be used, if needed, and could fade into the background if not required. And thus, the Westwood Barony – a frontier region, formerly contested lands nestled between a majority-human kingdom and an elven nation, and home to displaced orcs and goblin tribes who become rivals as resources and safety grow scarce. 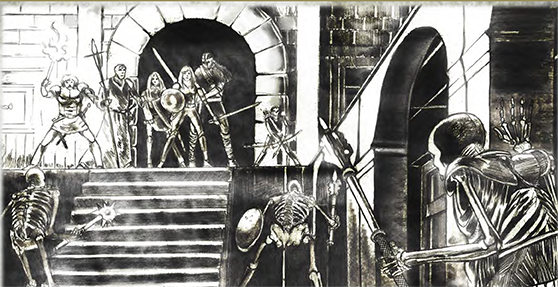 I think most good adventures have a mystery at the core, something for the players and their characters to solve or discover. I think the reveal of what’s really going on is something that has to be present, though the players can engage with that as much or little as they’d like. With NeMoren’s Vault, we set up the mystery at the beginning during the reading of the will, and provide a few more avenues in via the history and exposition that they may discover during that introduction. Basically, the departed baron regrets some terrible past actions and the characters have become beneficiaries due to the baron’s guilt. The adventure is karma for the baron’s actions – the payoff he gave others to keep their silence and hide his guilty actions will now become the common link that pushes the characters to learn those secrets and perhaps delivery justice for those who have been wronged.

So, the players can have their characters simply explore the late baron’s vault – it’s full of traps and danger and strange creatures and treasure. The adventure is all set up to get in and roll some dice and have some fun. Beyond that, there’s also a mysterious curse that haunts the baron’s estate and hometown – is this related to his past actions? Or just wild rumors? And what about the disappearing townsfolk? Or the strange sickness that has affected the locals? And what does a hidden hobgoblin tribe have to do with all of this?

Again, the goal was to have some added depth there to be explored, if the players so desired. It’s possible for a group to run through the adventure, collect treasure, and move on. It’s also possible to aid a group of hobgoblins in their struggles against an increasingly aggressive orc militia. Or to stumble into the deadly web of a dark warlock cult. Or to find the unknown and unborn heir to the barony. Or to even assume the role themselves, providing political challenges and additional responsibilities. 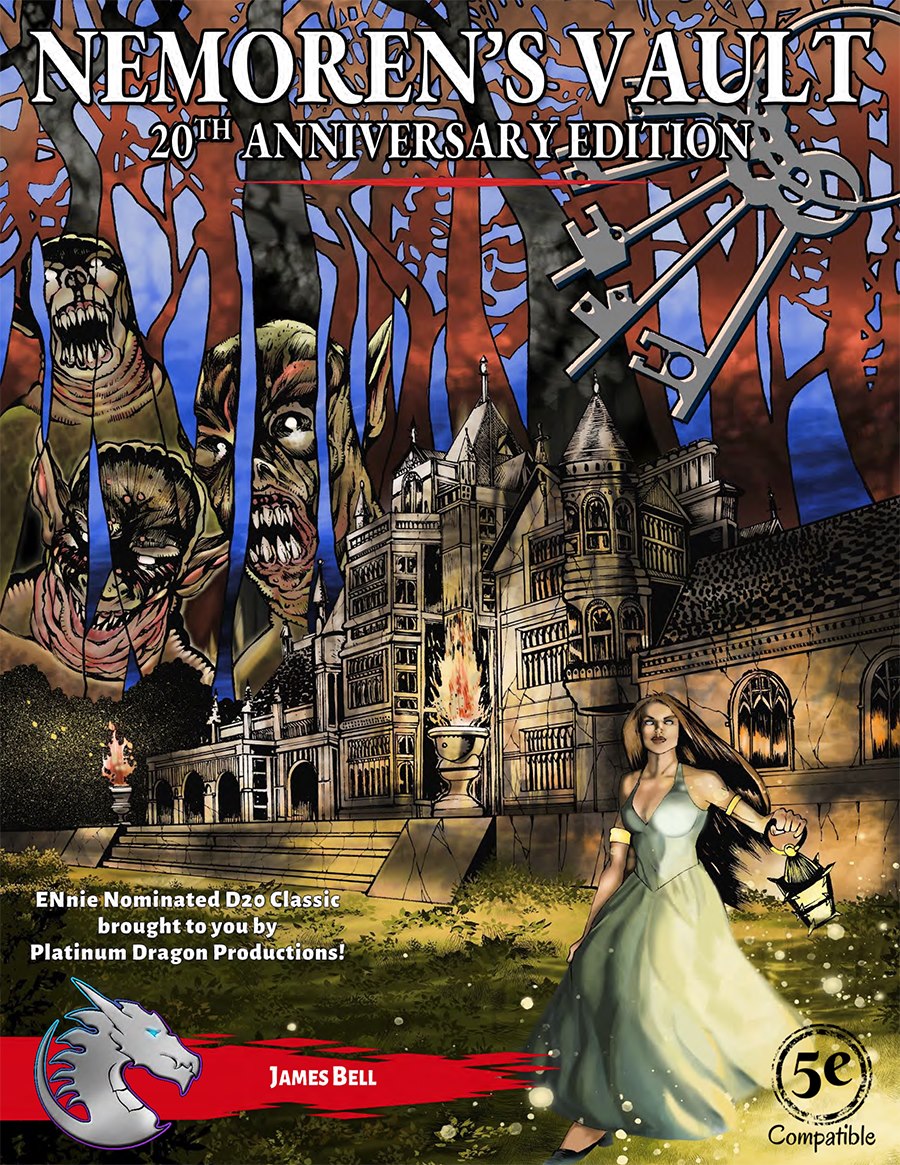 I think NeMoren’s Vault 20th Anniversary Edition [1] is still a pretty fun romp and a good campaign launcher, with a bunch of interesting nuggets thrown in there to lead off into several different directions. I’m happy that we can still look back fondly at that first project and celebrate the decade that Fiery Dragon was active and the ongoing friendships that we made along the way. And I’m glad that the joy this game brought us in our teens and inspired our participation in this industry is still a part of our lives and bigger and better than ever. I can’t wait to see what the 50th Anniversary version will look like!