Flames Rising is pleased to present the web version of the new release list that White Wolf is handing out at Gen Con Indy 2011. Several members of the White Wolf crew are on-site at Gen Con talking to fans about new and classic World of Darkness games. This is a look ahead at what new products are on the way and some news about the ongoing Now in Print program at DriveThruRPG.com [1].

Vampire: The Masquerade exploded into hobby games in 1991 and inspired a generation of fans which the game industry had never seen before or since. This book is for all of the White Wolf fans who have lived, loved, and taken the long road with us for the past two decades.

This is Masquerade in all its glory.

An updating of the classic rules from Vampire: The Masquerade – Revised Edition. This book contains all thirteen original clans, clan variants and bloodlines, with their signature Disciplines. It also has rules for character creation and advancement from neonate to Methuselah, as well as all the Discipline powers from level one through nine. The book also features new full color art by Tim Bradstreet and other classic Masquerade artists.

Gary, IN. It has been years since the War for Chicago, and nearby Gary, Indiana has been impacted by the changes. Things are heating up just as a new coterie comes onto the scene. How will the balance of power shift in the coming nights?

This is a brand-new Storytelling Adventure System story written by White Wolf specifically for the Wrecking Crew’s use at the Grand Masquerade, using Vampire 20th Anniversary rules. It will later be released as a PDF for sale through DriveThruRPG.com [1]. 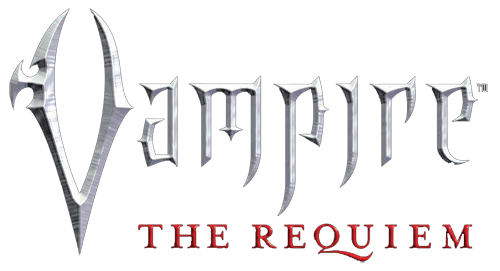 Away from the eyes of mortals, vampires gather, nursing eternal grudges and burning for eternal love. A select few humans become part of this night world, bridges between the living and the damned. Can they resist the passion they have for each other, or must they defy the customs of living and dead alike?

Strange, Dead Love is our first collection of “world shards” for Vampire: The Requiem, different mixes of setting and rules to present a variety of Vampire worlds conducive to paranormal romance.

Archmasters pass a threshold in knowledge and power – the great secrets are just this far from their grasp. But mages exposed to greater secrets know that the quest and its goal are one.

Imperial Mysteries is a Mage: The Awakening book that digs into what happens to mages who transcend to the highest level of mystical power, including mechanics for Arcana at 6 dots or more.

House Divided is a four-part series of interlinked Storytelling Adventure System stories released every quarter. Each story is suitable for all of the World of Darkness gamelines. Each story will be designed to be complete in and of itself, but the larger story is revealed if you play them all.

Many hate and revile them, yet none turn away from their visits. They are members of the Guild, a mercantile organization whose caravans and trading ships cross the face of Creation. They care not for the will of princes or Exalts, but only for profit. Some despise it, while others idolize it, but in truth, the Guild cares not if it is loved or hated, so long as those who do business with it pay their bills in full.

Masters of Jade details the Guild, the greatest of the world of Exalted’s merchant organizations. It will update the classic Manacle & Coin supplement to Second Edition, including new details of the Guild’s structure and methods – and of its abominable trade in addictive drugs and slaves.

The foggy streets muffle the rattle of cab wheels and the measured clip-clop of horse hooves. Well-dressed gentlemen in top hats raise their lanterns high as they quickly make their way through the fog, practically dragging along women in elaborate dresses. This is London at the end of the nineteenth century, and even in this age of science and industry, people still believe in faeries.

They believe in you.

Victorian Lost offers advice and material for running Changeling: The Lost chronicles set in Victorian England. Akin to the previous books like New Wave Requiem and Mage Noir, Victorian Lost will focus less on the historical details of the late 19th century and more on evoking the Victorian Age through the eyes of the Lost.

Secrets of the Covenants is a Vampire: The Requiem sourcebook presenting some of the intertwined politics between the vampiric covenants. Presented in a similar style to our critically-acclaimed Requiem Clanbook series, this book will showcase the shadowy conflicts between factions through interconnected narratives, as well
as providing new rules to enhance covenant play.

Ever wanted to play a space opera game with an Exalted flair? Or a modern game with massive swords and crazy martial art stunts? Shards of the Exalted Dream offer a variety of settings and genres for use with the Exalted system, much like the “shards” first presented in World of Darkness: Mirrors.

Our latest game line for the World of Darkness, Mummy will be developed using an open process in which the community can see the progress of the game and contribute, and released as a virtual box set.

Continuing the tradition from The Grand Masquerade 2011, the Werewolf 20th Anniversary SAS will be a new Storytelling Adventure System story written by White Wolf specifically for the Wrecking Crew’s use at the Grand Masquerade, and later released as a PDF for sale through DriveThruRPG.com [1].

The first supplement for the new Mummy game set in the World of Darkness.

An update and expansion of the Scroll of the Monk, providing new martial arts for Exalted characters.

The second supplement for the new Mummy game set in the World of Darkness.

White Wolf, working in partnership with DriveThruRPG [1], is now offering Print versions of both our newest PDF products and our vast library of previously published books. The following listings are just the tip of the iceberg and we’re working feverishly around the clock to make every single WW book available in this format.

Please feel free to contact either Rich Thomas at RichT@white-wolf.com or Eddy Webb at Eddy@white-wolf.com.
For news and discussion of our products visit www.white-wolf.com [2]
Follow us on Twitter: @wwpublishing [3]

During GenCon we will be tweeting where we are and what we’re up to, so follow us and drop in wherever we are. We might be at the DTRPG booth, we might be at one of our panels, but let’s face it: the odds are we’ll be at one of Indy’s delightful drinking establishments. Drop by and tell us about your characters.

WW PDFs and Now in Print books are available at DriveThruRPG.com [1].