Hi all, Hannah here! 2016 was a big year for John Wick Presents. The biggest event of the year, and the one you’ve probably heard all about, was the Kickstarter campaign for 7th Sea: 2nd Edition [1].

A high-adventure game of swashbuckling and intrigue, 7th Sea has maintained a devoted fan base since its first release in 1999. When John decided it was time to bring 7th Sea back to the gaming table, the response surpassed everyone’s wildest expectations. The Kickstarter campaign ended with 11,483 backers from around the world and over $1.3 million dollars. Not only was it an amazing show of support from existing fans, but thousands of new gamers would be welcomed to the world of 7th Sea for the first time.

We immediately got to work producing the first of the new releases—the 7th Sea: 2nd Edition Core Rulebook [2]. The result was a 300-page, full-color, fully-illustrated hardbound book, revised and updated for the 21st Century. We’re so proud of the book, and we hope the fans are too.

he core rulebook went out to fans in August, just in time for Gen Con, and the work hasn’t stopped since. Along with the corebook we’re releasing eleven additional sourcebooks, a storium deck, three original novels written by John, a soundtrack of tavern sea shanties, and a whole lot of sweet pirate’s booty—including a GM screen, maps, and custom card decks.

Speaking of sourcebooks, the end of 2016 also saw the PDF release of our first sourcebook, Heroes & Villains [3]. The 7th Sea Heroes & Villains book includes 40 Heroes and Villains to use in a 7th Sea campaign, including a number of new mechanics, villainous schemes, and heroic aspirations. The print version of the book is expected by February, so stay tuned! In the meantime, you can get a sneak peek of the interior here [4].

A million-dollar Kickstarter requires a lot of crew to keep the ship afloat. In addition to the amazing developers, writers, artists working on the sourcebooks, John brought on a Marketing Director—that’s me!—and a Creative Director, industry vet Leonard Balsera [5].

As Marketing Director, I keep our website and social media accounts up-to-date, manage sales campaigns, make sure folks now about our next releases before they happen, and regularly pester John about writing his next blog post.

As Creative Director, Lenny keeps track of project schedules, communicates with writers and developers about the work that needs to get done, and ushers books through their various milestones until they go to print. We work side-by-side with John and Mark Diaz Truman, JWP’s Business Manager, to make sure we’re producing work that meets our high standards and aligns with John’s vision of the 7th Sea world.

If you’d like to follow along closely, we’ve got a 7th Sea production schedule [6] up on our website. 2017 should see the release of ten additional sourcebooks—from Pirate Nations to the Crescent Empire to Secret Societies and more.

We’ll also see the Pirate’s Booty rewards unlocked during the Kickstarter. That includes the GM screen, Hero & Villain decks, and the Sorte deck, illustrated by the talented Jabari Weathers [7].

If that’s not enough 7th Sea for one year, expect to see both Daughter of Fate, the first of the 7th Sea novels, and the second novel, Born Under a Black Flag, before the end of winter. We’ll also be launching the Kickstarter campaign for War of the Cross—a strategy board game centered on the thirty year conflict that raged across Théah prior to 7th Sea: Second Edition. If you’d like an advance preview, we’ll be demoing the game in Boston this March at PAX East! It’ll be our first year at PAX, so please drop by and say hello! 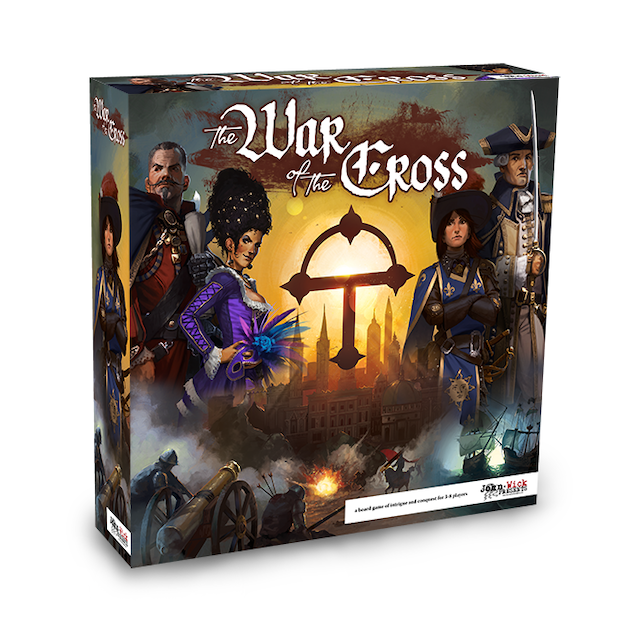 You can follow along with JWP to get updates about the January launch of the Explorer’s Society (our community-created content program, modeled after the D&D DM’s Guild), the launch of the official 7th Sea LARP (developed by Danielle Lauzon, whom you can find at the Midwinter Gaming Convention [8] this month), and the 7th Sea Heroes League—our upcoming Organized Play program.

2017 is going to be a year of communication at John Wick Presents! With so many irons in the fire, we’re trying our best to keep in touch with the community.

We’ll be traveling across the country to multiple conventions [9] this year, and we’d love to see you there!

You can also reach out via Twitter [10] or Facebook [11] with any questions or comments. If I don’t know how to answer your question, I’ll pass it along to someone who does! 🙂

-Your friends at John Wick Presents