A Feast for Crows Fiction Review 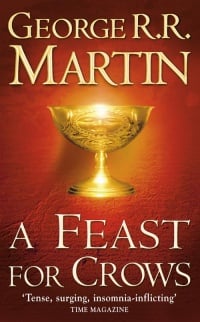 It has been years since I read the first three novels of this series, and since the series came out on HBO…I decided to re-read them and this was the first time I actually read the fourth book. One of the hardest things that Martin has been able to do was write from so many different perspectives. I think people underestimate how difficult
that can be. So when you pick up this book you are ready to see what has happened after the craziness of the ending of Storm of Swords.

Wow, if you are someone that needs continuity, you are in trouble here. Not only do you not get the characters you are normally used to reading, but you get characters you have never even heard of before. Mainly due to the fact that they are called “The Prophet” or “The Princess in the Tower”.

Right off that bat you don’t even who these people are. This wasn’t a horrible thing, it just was confusing to all of a sudden get perspectives that you have not gotten at all in the first three novels.

The best perspectives in this story was Cersei and Jaime Lannister. You did not get any of their perspectives in the first three so it was interesting to see them really take the lead here. You knew Cersei was a manipulative and cold bitch before, but after reading here here….it was still a bit shocking to see just how MUCH she was. It
was crazy what she would do and get away with. As for Jaime, he went the other way. He is becoming more honorable as the story went along. I think it had to do with being protected and saved by Brienne in the last book, but Jaime just wants to protect the king…since that is his job. From the get go, the relationship between the two was different. They are brother and sister, but love and have sex with each other. When Jaime came back after having losing his right arm, it changed the way he looked at things…and this did not sit well with Cersei. The conversations between the two have been some of my favorite in the series.

You did get a very small bit from Arya and a bit more from Sansa. I have always loved their perspectives. That is due to how much I love the Starks.

The other perspectives although interesting, were not as much as the brother and sister. It deals with the Greyjoy’s and who would succeed as heir since Balon died. As I said, it was interesting, but still felt a bit forced since you had not heard much of anything (other than Theon a few times in book 3) from the Greyjoy’s.

It really hurt not getting to hear from Tyrion, Jon Snow and the Wall, Daenerys, and the rest. In the back of the book he talks about how he split the book in two, but it was such an odd way to go about it. It felt like a slap in the face considering it took him so long to actually write this book…and then another 5 plus years to write
Dance of Dragons.

I really enjoy this series, but do not understand why he went about this in this way. It isn’t that it wasn’t fun to read, cuz it was. But without the characters you were really wanting to read about, it felt a little forced to read about all of these others. I know of a lot of people that loved this series, but this book was a real struggle for them to get through.

Now saying that, I still really liked this book, just not nearly as much as the first three. The things that made the first three books were missing here and I know the next book is supposed to have all the characters we miss and love so much, and I am looking forward to seeing what is going to happen next.