“Learn magic, for it is the only truth of this reality. Become magic, and you will become the essence of truth. Fear not what others call the Twilight, for that realm of dim illumination is not dusk, but is, in fact, dawn.”
— Criamon the Founder 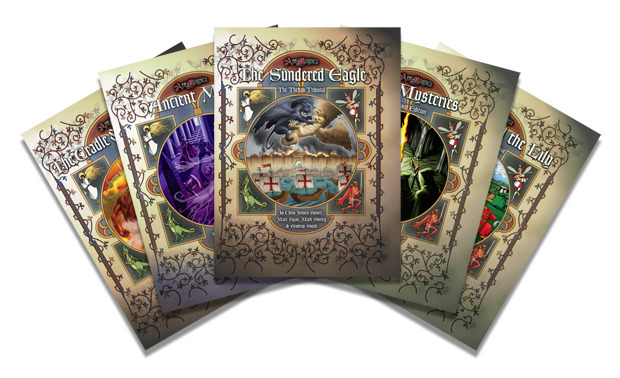 The KickStarter Campaign for Ars Magica: Years of Conquest is now available! The Campaign will run until November 18th, 2012.

Years of Conquest is based on Atlas Games’ award-winning Ars Magica role-playing game, and features a full century of simulation gameplay in a fantastic and magical Medieval setting. A faithful rendition of the original game, Years of Conquest incorporates the full Fifth Edition rules, including the legendarily powerful and flexible magic system.

The player must build their own Covenant in a time of invasion and strife and protect it from influences both within and without, if they are to attain the dizzying heights of magical power. For the first time in the 25 year history of Ars Magica, players are invited to discover the secrets of House Diedne, a powerful and enigmatic House facing total destruction.

100 years of gameplay, from 1000-1100 A.D.
Cast powerful Spells, in any portion of the game
Plan, build and upgrade your defenses, village and laboratory
A unique combat engine in which the environment plays as significant a role as the opponents
Research magic, create powerful artifacts and leave a legacy
Interact with a cast of hundreds
Protect your Covenfolk as they live, grow, work, play and pass on to the next generation
Interact with Knut, William the Conqueror and the First Crusade
Make difficult judgments, each leading you one step closer to an ultimate destiny

KickStarter pledges containing the full game begin at $20, and the game, if funded, is expected to launch Q2 2014.

Find out more information and back this project at Kickstarter.com!

About Black Chicken Studios
Black Chicken Studios, Inc, headquartered in San Diego, CA, was formed in 2007 to provide interesting and novel alternatives to mainstream games, offering experiences which promote creativity, reward knowledge and inspire imagination. It is especially our goal to create games wherein challenges can be overcome by study, diplomacy and character. Our company has an inclusive content philosophy, and makes a practice of incorporating as much work as possible from fans, independent writers and artists.

About Atlas Games
In 1990, Atlas Games’ very first product was Tales of the Dark Ages, a collection of licensed adventures for Ars Magica. Five years later, Atlas acquired ownership of the game itself, and has since released two editions of the core rulebook and dozens of supplementary books. Ars Magica Fifth Edition won an Origins Award for Best Role Playing Game, and a Gold ENnie for Best Rules. Besides tabletop role-playing games, Atlas is known for card games such as Gloom, Once Upon A Time and Lunch Money. Atlas Games is based in Saint Paul, Minnesota.