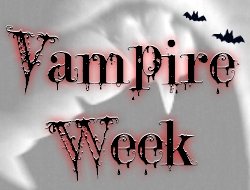 Sharpen your fangs and lick your ruby red lips! It’s Vampire Week at FlamesRising.com! From now through Saturday, we’re going to introduce a broad range of vampires to you through reviews, articles, essays, and a fun contest, too!

While FlamesRising.com has always been a big fan of the vampire genre, this week is our chance to honor all the great vampire characters that are out there while exploring some new ones. To help you get started, here’s the Top 10 Most Popular Posts about vampires on FlamesRising.com.

1. Vampire: the Requiem: Actual Play [1]: Our series of posts about our weekly Vampire: the Requiem game is a favorite among many vampire fans here at FlamesRising.com. Read what happened to Blake, Lavender and all their friends and enemies.
2. Dracula: the Undead Review [2]: Monica’s review of the book that was dubbed “the sequel to Dracula” is the most popular vampire-related review on our site. Find out what she thinks and read some interesting comments.
3. Blood Groove Preview [3]: In this tale of deadly vampires, travel back in time to an age when cell phones didn’t exist. Written by author Alex Bledsoe, this preview is one of the most popular vampire excerpts on our site.
4. Nocturne Preview [4]: Of course, we can’t mention vampires without mentioning romance. Even though some of you prefer your vampires to be more monstrous than seductive, quite a few of you are attracted to the sexy-yet-dangerous vampires. Our preview of this book about vampires and magic, which was written by L.D. Harkrader, is the most popular excerpt from the paranormal romance genre.
5. Interview with author Derek Gunn [5]: Have you read the Vampire Apocalypse series by Derek Gunn? This horror author, whose short story was also included in Buried Tales of Pinebox, Texas [6], has gotten a lot of buzz for his vampire series. Recently, New Baby Productions has turned his novel into a horror comic, too. It comes as no surprise to us that Derek’s recent interview is really popular on FlamesRising.com.

Stay tuned for more fang-filled content this week on FlamesRising.com! If you want to comment and join in the fun, feel free to drop by FlamesRising.com on Facebook [7] and share your thoughts about vampires.