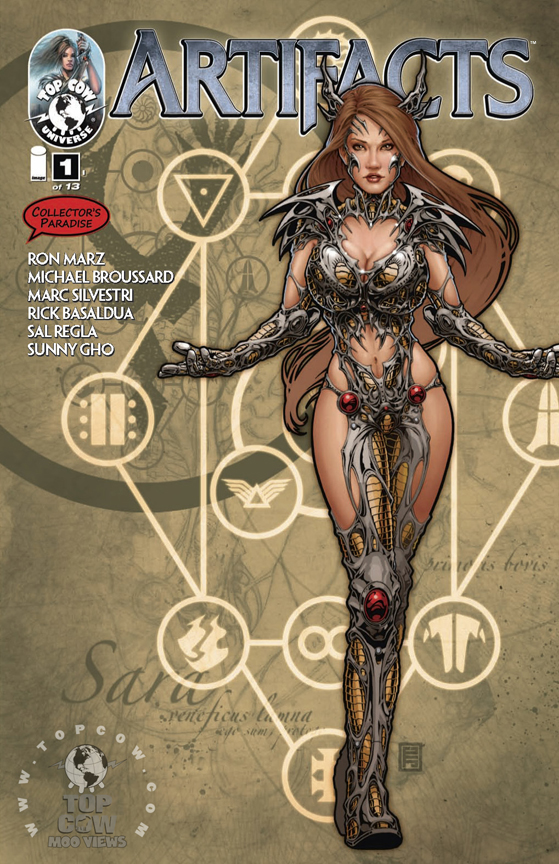 Here is is, folks, Artifacts #1, the first issue of the big cross-over event of the Top Cow universe, just now out at your local comic shop. And is it ever off to a bang. In several of the Top Cow series, we’ve been hearing about the 13 artifacts and how dangerous it would be to bring them all together. (Potentially, you know, the end of the world.) Some of the artifact holders are actively working toward that. Others are, of course, working against it, not wanting to be a party to Armageddon. But when Tom Judge is released from Hell bearing the Rapture, one of the 13, it begins to look like fate (or some power like it) is at work, bringing them together.

We open in New York with Sara Pezzini, the bearer of the Witchblade, fighting a minion of hell who is killing priests, looking for one in specific, the aforementioned Tom Judge. Judge doesn’t know how he escaped hell, but he makes his way to the shop of the Curator, the wise old man who was so vital to Dani, now the Angelus host, Baptiste during the War of the Witchblades. The Curator fills Judge, and by default, the readers, in on what the heck is going on with this artifacts thing — and why it’s vital they don’t all come together.

Meanwhile, despite the protection of the Angelus force and the Darkness, Hope Pezzini, daughter of Sara and Jackie Estacado (the host of Darkness) is kidnapped by Aphrodite IV, making me as an audience member really wish Sara’d killed the cyborg assassin when she had the chance. Also in this issue, a character I’ve been growing to love over the past several issues of Witchblade is murdered. Saying who would spoil the shock value, so I’ll leave it at that (and just hope that some crazy force in the highly supernatural Top Cow universe comes to the rescue in the next issue).

Ron Marz is writing Artifacts, but joining him for the artwork are Michael Broussard on pencils, Rick Basaldua and Sal Regla on inks, and Sunny Gho on colors. The art team does a phenomenal job — it’s not Sejic’s surrealistic style from Witchblade and Angelus, but there’s a great deal to look at in these images, from shattering stained glass to a scruffy looking Tom Judge walking out of the panels. On one page, Sara lets loose with her gun, and in each progressive, page wide panel, the witchblade grows longer on her arm until she’s armored up and ready to fight. (There’s one panel that suffers from “comic-book-women-have-painfully-enormous-breasts” syndrome, but only one.)

The ending of this issue with a “holy crap, they just did that?” moment means we’re likely to get a lot of world shifting moments in this series. If you haven’t been reading any of the Top Cow series, I’m not sure this is the right place to start, but based on the recap from the Curator, Marz is trying to make it easy for new readers to dig in to the universe. If it keeps the tone of issue one, this is going to be a great ride.