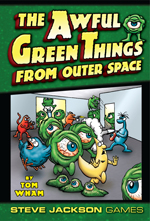 The crew of the exploration ship Znutar just wanted to cruise around the Galaxy, discovering strange new worlds and playing pool. But then their ship was invaded by the Awful Green Things . . . and suddenly they were fighting for their lives!

I recently had the chance to try this game. Amazingly, I had never even demoed the Awful Green Things From Outer Space before. I’d seen it sitting on the shelves of the local game store before and thought it looked like fun. Naturally, I played the role of the alien monsters the first time out, but both sides are just as fun in the end.

Before game play can begin, there’s a little set up involved in this primarily two-player (or two teams) game. First, the Znutar crew has to be placed into different locations on the ship. Then, players need to resolve the starting locations for the Awful Green Things, weapons, etc. Once you’ve played a few times, the set up will go fairly quickly. It took us about five or ten minutes to set up the game the first time we played.

Whether you start on the Awful Green Things side or the Crew side, the game mechanic works best if you plan ahead for your next moves. Both opponents share similar “stats,” which are indicated on their counters: 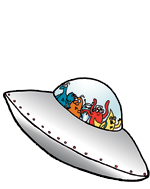 Now, the alien crewmen can pick up various weapons that are scattered about the ship. Some are actual weapons such as knives and stun pistols. Others include a welding torch, a fire extinguisher and a can of Zgwortz. The aliens don’t exactly know what effect these items will have on the monsters, so the first time one of them is used in play the player draws a random weapon effect chit. This will determine just what happens to the monster when the alien successfully hits it.

The effect could be powerful, giving that particular crewmember four attack dice to hit or it could cause the monster to fragment into little alien monster bits (which can then grow into more monsters later on).

To me, I felt this random effect is one of the cooler parts of the game, because it means you don’t know what is going to happen. These effects can quickly force a player to change tactics and get creative if they don’t want their side to be destroyed quickly.

The most powerful alien crewman is definitely the robot. It has a powerful Constitution, which makes it rather difficult to defeat unless you have lots of alien creatures attacking it as a team. Should the alien monsters overcome the robot, one of them must immediately try to eat him, which may end badly since a random weapon effect chit is drawn once the robot is destroyed.

Eventually, one side will obviously be in control of most of the ship. This is usually when one player is declared the winner. There is a point system, but it appears to have been written into the rulebook mostly for the humor value rather than any meaningful count.

We didn’t get the chance to play them, but there are missions and alternate rules included with the game that offers a clearly-defined escape or more opportunities for the Awful Green Things to take over the ship.

If you’re looking for something fun to try that’s a hybrid between an RPG and a board game, you might want to check out Awful Green Things From Outer Space. 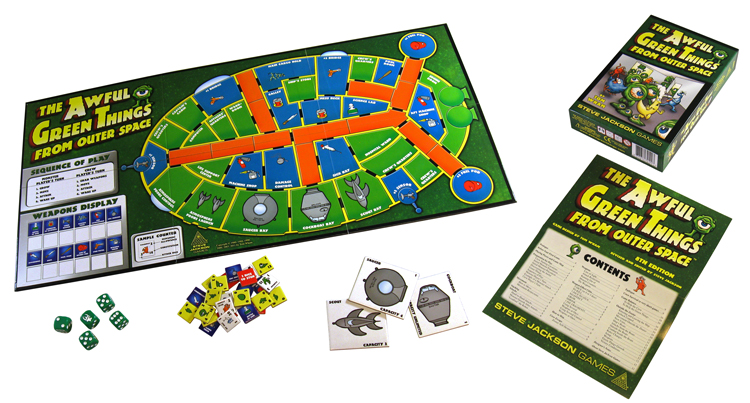 [5] Wolves at the Table : https://www.flamesrising.com/wolves-at-the-table/