The booth was located at the back of a very large and very huge hall, but that didn’t stop new and old fans of these games from driving on back to DriveThruRPG [1]. The quality of the new books is really awesome; people were literally saying… “That’s POD?” when pointing to the Exalted Comic [2] and Ptolus [3]. 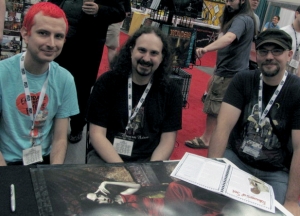 And the fans? The ones who practically wept with joy seeing Vampire: the Masquerade back in print? Or how about the guy that seriously demanded to know when his copy of the twentieth anniversary edition will be sitting in his mailbox because he loves that game so much. There were a lot more cheers than jeers and because of the fans, there will be other 20th anniversary edition games in the works.

Besides the already scheduled signings, Jim Zubkavich offered to sign the Exalted comic, Greg Stolze was happy to drop off signed excerpts of his Vampire: the Requiem novel, A Hunger Like Fire, and Jason Vey took time to sign All Flesh Must be Eaten books with me from Eden Studios.

Congrats to Monte Cook! We sold out of Ptolus on Saturday morning.

The booth’s success was due to the efforts of the fine people working the booth. Chuck, Mike, Pauline, Sean, Matt, Steve, Corinne, Ken, Steve, Luke, Carol and myself. We came, we sweated, we had meetings, we ate, we sweated some more… 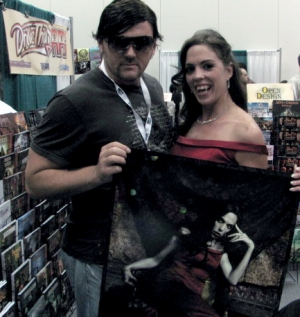 Sadly, the first game we got to play was with Steve Wieck during tear down. Matt had sold him on Castle Panic [4]. We barely won our first round. However, we also picked up quite a few games and are dying to get the chance to play. Unhallowed Metropolis, the Mouse Guard RPG Box Set, Savage Worlds Deluxe [5], Cthulhu Gloom, the French Edition of Exalted [6], the Vampire Translation Guide, a Halloween Chibithulhu, a selection of cute-but-devilish toys, catnip Cthulhu, a Lovecraft resource and Rust [7] (a new Archaia graphic novel) made it home.

Ashen Stars did not make it home, but it will… Shortly… I swear by the stars…

Waiting for us here? The debut Magic: the Gathering 2012 set and a stunning anthology from Tachyon Publications dubbed The Urban Fantasy Anthology edited by Peter S. Beagle and Joe R. Lansdale.