Band of Zombies announced for All Flesh Must Be Eaten RPG 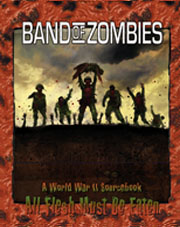 Coming this November, Eden Studios is proud to announce Band of Zombies.

Band of Zombies is the new World War II sourcebook for All Flesh Must Be Eaten [1], and it is positively packed with new surprises. Inside you will find:

• New Qualities, Drawbacks, Inspired Miracles, and Zombie Aspects
• Detailed Rules for Dogfighting and Naval Combat
• Rules for Shell Shock, Combat Stress, and Madness
• New gear, from guns to aircraft to naval vessels to tanks
• Mass Combat rules
• The first (optional) tactical miniatures skirmish rules for the Unisystem!
• The first complete and detailed campaign setting for All Flesh Must Be Eaten. Different types of Zombies the world over, all tied to the exact same Rise Event, create a worldwide plague of undead during the Greatest War.
• Advice on running campaigns in World War II, from fire teams to commando squads, to SOE operatives behind enemy lines.
• And more!

So strap on your rucksack, hoist your SMG, keep your socks dry, and for cripes’ sake, Private, don’t forget the call sign! When they come shambling out of the dark, will you stand tall or join the armies of the dead?

Promotional flyer for your local game store can be downloaded here [2].

[1] All Flesh Must Be Eaten: http://flamesrising.rpgnow.com/index.php?cPath=60

[6] One of the Living RPG Review : https://www.flamesrising.com/one-of-the-living-review/

[7] Review of All Flesh Must Be Eaten : https://www.flamesrising.com/afmbe-review/