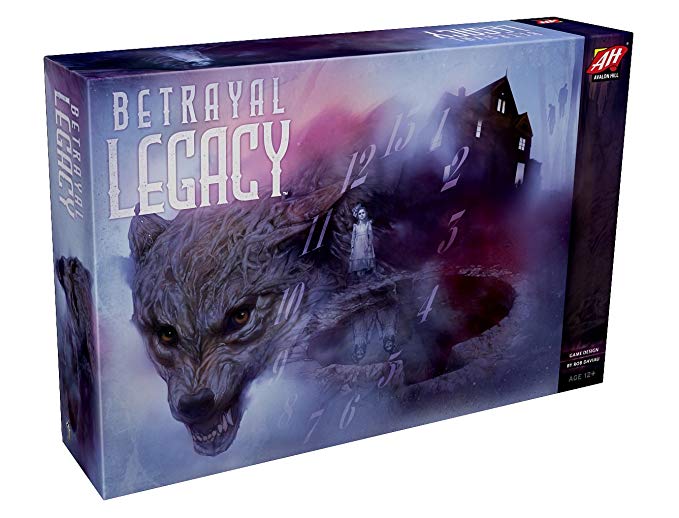 15 years ago, the Avalon Hill division of Wizards of the Coast/Hasbro released a board game called Betrayal at the House on the Hill, to little fanfare. It was a game of exploring a classic haunted house, but with a twist: eventually, as the mansion was explored and the tension grew, one player would be seduced corrupted, or possessed by the evil entity residing in the house, and the race was on for the players to either destroy the evil and survive, or fail, and either die, or become pawns of the entity.

As time passed, the game grew in popularity, spread mostly by word of mouth. Today it has seen a second edition, a full expansion with new cards and scenarios, and a spin-off: Betrayal Legacy [1].

The innovative design — seen previously in such games as Chill: Black Morn Manor from long-defunct Pacesetter Games — involved revealing tiles as doors are opened and new rooms explored. What Betrayal did that was significantly different was to add multiple floors to the building, allowing for a greater degree of variation in an experience with an already strong replay value. As rooms are explored, useful items are discovered, clues unearthed, and finally, events occur that trigger the haunt of that particular scenario to take place. In Betrayal Legacy, players are faced with the same issues as in Betrayal at the House on the Hill, only the difference this time is that resources used up, altered, or destroyed in previous sessions are not necessarily available later. This allows for a challenging campaign-style board game, presenting new obstacles to players who just want their characters to survive the night.

Initially, I had a problem with the whole idea of legacy-style games. The idea of marking and/or permanently altering components seemed almost sacrilegious to me. As I played the game, I began to understand more fully: the amount of game material to be played through is impressive: there is enough here for months, even years, of play. Altering the components doesn’t make the game less enjoyable in any way, which was one of my concerns. Also, scenarios can be replayed as “free play” at any time, so players aren’t required to run through every scenario first before returning to replay a favorite haunt.

Another concern: the premise of the game is that one player becomes evil and works with the entity against the other players. This is not always desirable, and some players bitterly resent losing control of their character in this way. While most of the scenarios in Betrayal Legacy are written with this element, there are some that do not require one or more players to work against the others.

Betrayal Legacy [1] contains a lot of components, and reading careful will be important, as some things will not be used at all in any given scenario. The sheer volume of pieces involved in the game might make set-up a bit time-consuming at first; players may wish to assemble and collate things in advance to speed play during the game. Due to the legacy nature of this game, there are several elements – including decks of cards, that players are advised not to shuffle so that their events and effects happen when and how they should.

Designed for three to five players, Betrayal Legacy scales well thanks to specific mechanics, but I’ve found the game works best with four or five players. The suggested 75 minute playing time is reasonably accurate; some scenarios may run a bit longer due to added complexities, and the game will take longer in the first few playthroughs as the players learn the way the game works. The 12+ age recommendation is also quite accurate, being a measure of both attention span and comprehension skills.

I thoroughly enjoyed my play-through of Betrayal Legacy scenarios. As a fan of the non-legacy version, I had a few doubts initially, but these were put to rest as play continued. With a $75 suggested retail it’s on the pricier end of board games, but the wealth of material and substantial replay value make it well worth the investment. This is a perfect game for fans of the horror genre specifically, and for board game enthusiasts in general.