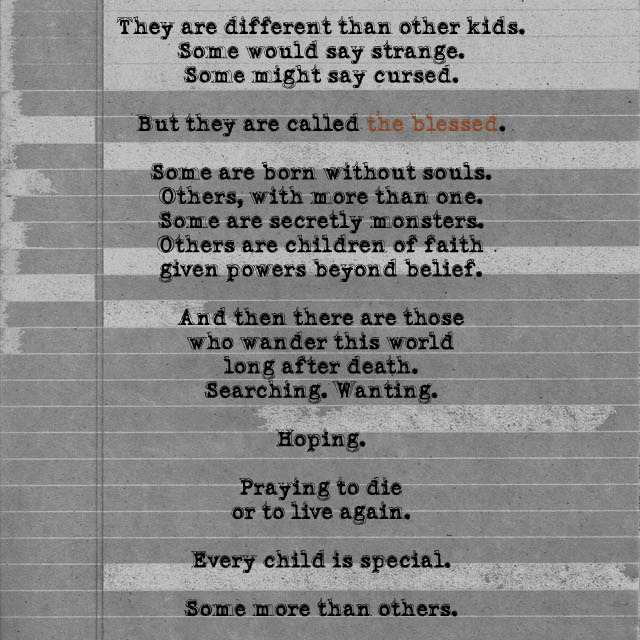 [1]Blessed are the Children is the third book in the acclaimed tabletop horror game line Little Fears Nightmare Edition.

Little Fears Nightmare Edition Book 3: Blessed are the Children is the third main book in the acclaimed roleplaying game line of childhood terror. The new edition of the original game of childhood terror launched in 2009 and has gone on to sell thousands of copies and garner praise from gamers worldwide.

In 2011, Among the Missing, the second book in the game line, launched with a portion of proceeds going to the National Center for Missing and Exploited Children [2].

Over the years, I have published seven standalone episodes, the Campfire Tales and just launched a line of Goodie Bags mini-supplements, both in PDF.

Little Fears is a game that is very close to my heart. I have wanted for some time to release the third book in the line, Blessed are the Children. The first book introduced the world of Little Fears Nightmare Edition, the preteen protagonists and the otherworldly monster they battle. The second book talked about the various types of missing children–those taken by people, those taken by monsters, and those who slipped out of our reality into the World In-Between.

Book 3: Blessed are the Children [1] is about another group of kids. The Blessed are those with spiritual anomalies. Some have no souls, some have multiple ones. Some have monsters trapped inside them. Some can harness the power of the soul to do things beyond belief–like turn a monster good.

I am currently working on the book and it should be finished in September 2013. But I need art. I work with some great artists, and have brought on some new ones, but I ask no one to work for free. The $1500 I’m asking for goes to pay the artists. More money equals more art and some other nifty items that I’ll reveal should we get that far.