Dungeons and Dragons: The Book of Vile Darkness Movie Review 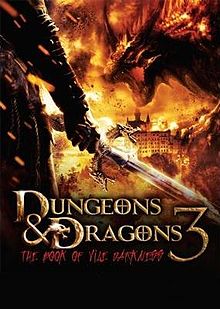 Two thousand years ago, Nhagruul the Foul, a sorcerer who reveled in corrupting the innocent and the spread of despair, neared the end of his mortal days and was dismayed. Consumed with hatred for all things living, Nhagruul sold his soul to the demon lords of the abyss so that his malevolent spirit would survive after his body perished. In an excruciating ritual, Nhagruul’s skin was flayed into pages, his bones hammered into a cover, and his diseased blood transformed into the ink to pen a book most vile. All those exposed to the book were driven mad or so corrupted by the wicked knowledge contained within they had no choice but to turn evil. Misery and bloodshed followed the disciples of Nhagruul as they spread their master’s dark dream. Creatures vile and depraved emerged from every pit and unclean barrow to partake in the fever of destruction.

The cities and kingdoms of Karkoth were devoured by this plague of evil until an order of warriors arose from the ashes. They called themselves the Knights of the New Sun and swore an oath to resurrect hope in the land. The purity of their hearts was so great that Pelor, the God of Light, granted the knights powerful amulets with which to channel his righteous power. Transcendent with divine might, the Knights of the New Sun pierced the shadow that had darkened the land for twelve hundred years and cast it asunder. But not everyone was awed by their splendor. The disciples of Nhagruul disassembled the book and bribed three greedy souls to hide the pieces until they could be retrieved. The ink was discovered and destroyed but, despite years of searching, the cover and pages were never found.

Peace ruled the land for centuries and the knights got lost in the light of their own glory. As memory of Nhagruul faded away so did the power of Pelor’s servants. The Knights of the New Sun abandoned themselves in the foolhardy belief that the Book of Vile Darkness could never again be made whole.

When young Grayson makes his oaths and joins the New Knights of the Sun he is dismayed when the blessing of Pelor is not bestowed upon him. After hundreds of years he hoped he would be the first true knight of the order but before he can reconcile his feelings the order is ambushed by dark forces and his father, their leader, is kidnapped. The young knight finds he must forsake his vows and pose as a minion of evil if he wishes to find his father to rescue him.

This movie is campy and filled with some of the best groan-tastic dialogue I have heard in quite a while. Along with some semi-impressive special effects and nostalgic references to the world’s first fantasy roleplaying game those are the few strong points of this film. Which is pretty much my way of saying when it comes to movies based on Dungeons & Dragons this one is par for the course. The movie amused me for a couple hours and since I did not expect anymore than that I got exactly what I was looking for.