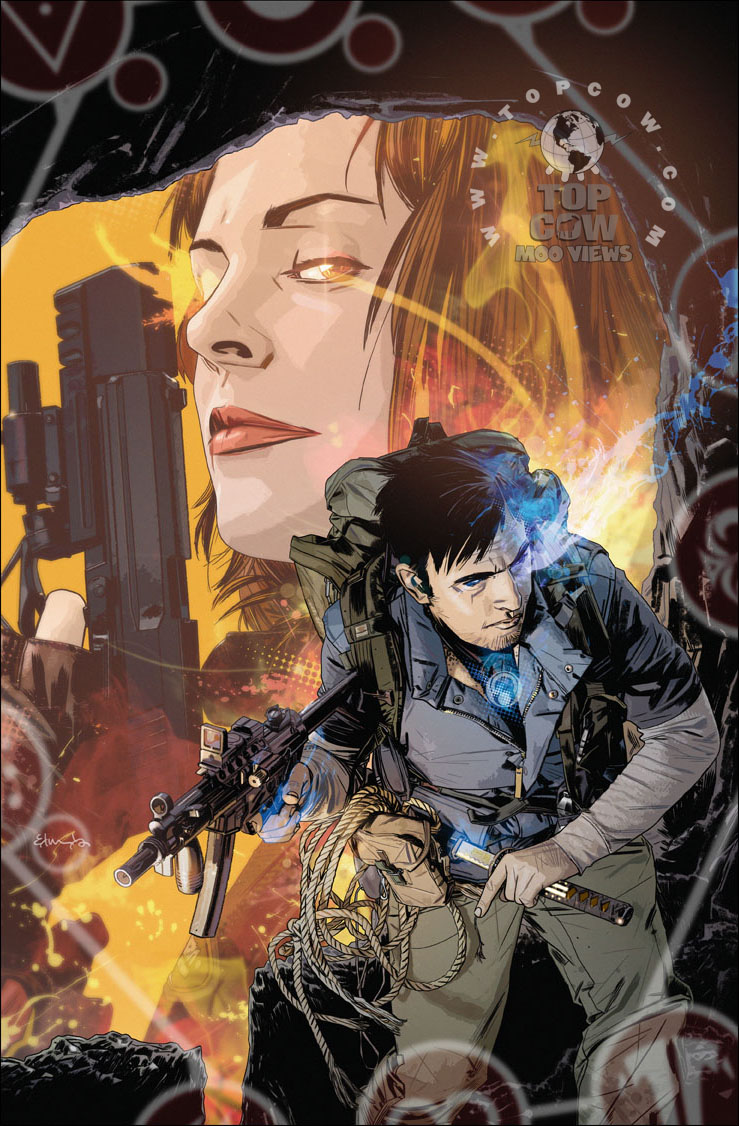 It’s hard to tell, at first, where Broken Trinity: Pandora’s Box starts. The cover says it’s #1 in the series. But it looks like it has back story, or is just jumping right into the middle of the action. In the opening, we learn that Gloriana has the Ember Stone, which can allow her to turn into a creature of fire, and possibly a dragon. Finn has the Glacier Stone, which can turn him into an ice giant. Gloriana wants to unite the 13 artifacts; Finn’s duty as the Glacier Stone keeper is to stop her. But what are the thirteen artifacts? One of them appears to be Pandora’s Box, which is being sought after by a cult known as the Disciples of Adam.

With a little web research, it’s revealed that three of those other 13 artifacts are the Trinity: the Witchblade, the Angelus, and the Darkness. So Broken Trinity takes place in the Witchblade universe, despite thus far having no plot relation. What we see here is an introduction to the major plot: the Disciples of Adam are determined to open Pandora’s Box and, effectively, destroy the world, and they’re happy to murder anyone who stands between them and their goal: including Gloriana and Finn.

Gloriana is mentored by Wulgar Olaffson, a harsh mentor and one who believes so firmly in her destiny that it’s difficult to see him as anything other than obsessively single-minded to the point of danger to himself and everyone around him. It’s hard to tell what Gloriana’s character is like: she defers to him, and yet, suffers from nightmares, presumably about her destiny. Finn is being mentored by Kenshin Kawakami, a sword master and the former owner of the Blood Sword, one of the thirteen artifacts that is now in Finn’s possession. The relationship between Kenshin and Finn, who both come through quite clearly as personalities, is one of the strengths in the story; immediately, I’m rooting for Finn, who is the reluctant bearer of the artifacts, to succeed over Gloriana and the Disciples of Adam. He, at least, is likable; the rest of the cast is less easy to identify with. The banter between Finn and Kenshin, even in the middle of battle, is quotable, and is definitely where the talents of writers Rob Levin and Brian Edward Hill shine. Their pacing is a little less convincing, and the story seems to jump around too much to hold onto for a first issue. Following a single main character and explaining that character’s back story would have helped out this episode quite a bit. Instead, we have two main characters, one who may be a villain (the jury is out on Gloriana, as far as I’m concerned, although Finn used to be a criminal, so it’s not as though he’s blameless himself), and a cult of murderers and assassins who apparently also have ninjas in their employ. It’s a scattered plot, to be sure, and drawing the readers into the next issue may be a challenge if the story line doesn’t solidify a bit.

The art style Alessandro Vitti used for the issue (with colors by Sunny Gho) has a vintage feel to it. Similar in tone to the art of Alphonse Mucha, whose work is associated with the old absinthe and champagne advertisements that are now common as prints. It’s an appealing style, and gives the comic a flavor reminiscent of Indiana Jones type adventures — sort of a pulpy context. It does lack the detail work that several of the other Witchblade universe tie-ins have, but if the narrative pulls itself together, that pulp flavor should enhance the story. The color work is less vibrant and nuanced than in other tie-in titles as well, but that adds to the Mucha-style flavor.

I’m not hooked from the first issue, and I wish more context had been provided for the series launch, so that I could immediately be sucked into the universe rather than feeling left adrift. But I think there’s potential here, especially with the pulpy art, and I suspect it could really take off if the story begins to come together.