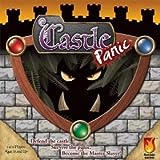 The forest is filled with all sorts of Monsters. They watched and waited as you built your Castle and trained your soldiers, but now they’ve gathered their army and are marching out of the woods.

Can you work with your friends to defend your Castle against the horde, or will the Monsters tear down your Walls and destroy the precious Castle Towers? You will all win or lose together, but in the end only one player will be declared the Master Slayer!

Castle Panic is a cooperative board game where players work together to protect their castle from an invading horde of Orcs, Trolls and their little Goblin minions. These monsters are bent on destroying what the humans have built and have a few nasty tricks up their sleeves to help them breach the castle’s defenses.

A Turn sequence in Castle Panic goes like this:

1. Draw cards up to your limit
The amount of cards that you can have in your hand varies depending on how many players are at the table.
2. Discard and draw 1 card
This optional step allows you to get rid of something you can’t use and hopefully pick up something you can.
3. Trade cards
This optional step allows you to work out a better strategy with your fellow players. Often, traded cards can help you can take out more Monsters or rebuild destroyed Walls.
4. Play cards
You can play as many cards as you want at this stage; it’s not uncommon to play your entire hand all in one turn.
5. Move Monsters
All the monsters currently on the board move one space closer to the Castle.
6. Draw 2 new Monster Tokens
Usually these are Monsters, but there are a few special tokens such as “Blue Monsters Move One” or “Giant Boulder” which can be just as deadly as another Troll.

The image of the board above displays colored areas, labeled rings, and a castle in the center. The monsters move in from the Forest during each turn; once they reach the castle they start to do damage to the walls and can move in to take down the towers. During their turn, the players get a chance to slay the monsters using various cards. Using the Archer, Knight, Swordsman and Hero cards, players typically deal out a point damage to the monsters each time they play a card. There are several bonus cards such as Barbarian (automatically kills one monster) and Nice Shot (kills one monster when combined with another card). Players can combine multiple cards per hit to do even more damage to the monsters. For example, a player can play two red Swordsman cards to slay an Orc who is just a bit too close to a Wall for comfort.

As I mentioned earlier, Goblins, Orcs and Trolls are the standard types of creatures that attack the castle. Each character type has different hit points that the players attack. If a character has 1 hit point, then the player only needs to attack them with one card. A character can also lose a hit point if they hit the castle’s defenses or towers, but those hit points also remove the structures from the game until you’ve had a chance to rebuild them with the Brick and Mortar cards.

Mixed into the Monster Tokens that you could draw are Plagues which can force all players to discard a certain type of card. For example, the Plague on Swordsman would force everyone at the table to discard any Swordsman cards currently in their hand. Another type of token are the bonus movement tokens which can make the monster move forward or to a new location on the board. For example, the Blue Monsters Move token allows all monsters in the blue area of the board to move another space closer to the castle.

The Giant Bolder could either be the worst or the best Monster Token that a player might draw. The Giant Bolder come crashing out of the Forrest destroying everything in its path, including Monsters and Walls. So, depending on where the dice tell you the rolling destroyer is coming from, it might just save the day by squashing all the monsters in its path. The Giant Bolder can only be destroyed when it hits a Wall or Tower, taking the structure out of the game.

The various “boss” monsters that are leading the horde against the castle can randomly be drawn just as any other Monster Token in play. Each of them has an extra feature or two that can really change the course of battle. For example, the Goblin King is a nasty little brute who has considerably more health than the rest of the goblins in the game, and once he’s placed on the board the Player has to draw and resolve three more Monster Tokens. Depending on when a boss monster enters the game, they can really do some damage to the castle and tip the battle in favor of the monsters.

My favorite element of Castle Panic is the teamwork players need to have in order to win the game. With a little strategy, plenty of communication and a little luck, players can defeat the Monsters with most of the castle intact at the end of the day. The Trade portion of the player turn becomes very important as the game continues. Having the ability the plot where the monsters will be ahead of time (they normally move one ring closer to the castle each turn) allows players to make better use out of the various cards. The other thing I’ve noticed, is that it’s pretty important to resolve the monster tokens in order. This is especially true when you end up drawing special instructions.

Castle Panic is a fairly simple game that is easy to learn and fun to play. Since it’s appropriate for ages 10 & up, it’s also a pretty decent family game. I feel it’s an excellent addition to any game library and offers a quick bit of fun when your group does not have the time for a more involved strategy game. Setting up the board only takes a minute and you’ll be killing monsters right away.

So, draw your swords and defend the walls!

Fireside Games has some excellent downloadable resources on the Castle Panic page [2] of their website. There is a FAQ, downloadable rules PDF, alternate rules and other goodies.