The Crown of the Blood Review 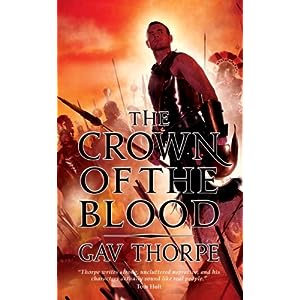 The Crown of the Blood by Gav Thorpe
Angry Robot, 435 pages

Ullsaard has conquered the known world. All have fallen before his armies.

Now it is time to take the long journey home, back to the revered heart of the great Empire he had helped create for his distant masters. But when he returns to the capital, life there is so very different from what he had believed. Could it be that everything he has fought for, has conquered and killed for, has been a lie?

I’ve long been a reader of Gav’s work and consider the novels he has written for Black Library Publishing to be among the best works they have put out to date. I was excited to see that Gav had stepped out of the Games Workshop intellectual property to create something all his own. The folks at Angry Robot were nice enough to send me a copy of The Crown of the Blood several weeks ago and I happily stuck in.

This novel is sort of a cross between the military history novels written by Michael Curtis Ford and modern fantasy. While not a typical blend, Thorpe makes it work. Greater Ashkor comes away stronger for the mix. The setting is logical and well though out, while remaining open enough for fantasy staples to work their way into the plot.

The protagonist of the story is a general named Ullsaard. He is an echo of other famous military leaders from our own past. Like Caesar and Alexander, Ullsaard is ambitious as hell and out for conquest. However, Ullsaard becomes caught up in political intrigue and becomes an unwitting participant in both sorcery and conflict with his masters.

If you enjoy historical military fiction, you will very much enjoy the combat and campaigns of Ullsaard. The conflicts make sense and are written to be both exciting and fit within what could be considered a reasonable campaign for a general of Ullsaard’s status. Unlike many fantasy novels out there, the violence in this book has a purpose beyond basic entertainment.

Thorpe’s realm of Greater Ashkor is well thought out and all of the details are in place. The novel comes with a guide to Greater Ashkor, its peoples and enemies. Unlike other books that contain extra information, this appendix is definitely worth reading over. The planning and care that Thorpe took when he created this particular world is first rate.

The fantasy elements within the story are slow to develop and done in such a way that even though you don’t see them often within this particular novel, you can see that they will end up being a big part of the overall story arc. I’m anxious to see what happens in book 2!

I would have preferred to see a bit more action from Ullsaard and his army. Some parts of the book are a bit too much like a travelogue, but this is also the opening novel of what will be a hefty three part series. I can see the importance Thorpe placed upon character development and fleshing out the setting of the story.

I would not suggest this series for younger readers or those uncomfortable with sexual content. There are a handful of passages with adult material. Read at your own risk.

This is one of Thorpe’s best novels. The setting and story are well thought out and are remarkably logical for a fantasy novel. If you enjoy military or historical fiction, you will enjoy The Crown of the Blood. Action, intrigue, conquest, and charismatic generals are waiting for you here!

[4] The Chapter’s Due Review : https://www.flamesrising.com/the-chapters-due-review/