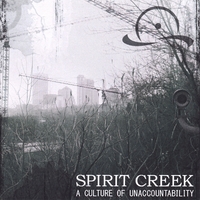 Seduced into Slavery
The Black Co.
Within a Grin
Mirror Mask
Land of Dreams
In Hell
Odium Rising
Onward Forward
That Lie Inside
I Am/Agatha Ln.
Poor Me
Ingrained

The newest CD from Spirit Creek, A Culture of Unaccountability, is the much anticipated CD release from them for several years. After a too long sabbatical from the band, they appeared out of nowhere on the scene again in Milwaukee, bringing with them their original lead guitar, Drew Ingle, and new bassist, Mike Jakubiak, as well as a brand new sound. Taking inspiration from Pearl Jam, Lacuna Coil, and The Cure, A Culture of Unaccountability has breathed new life into the Spirit Creek lineup.

After the introduction, The Black Co. bursts into the speakers, driving home the concept behind the album title. Heavy guitar and lyrics (YES LYRICS!) hit your ears and get your blood moving. And, as I mentioned before, lyrics that are understandable. The Black Co. is the preview to an album that was wonderfully mastered to be played at full volume in any sound system without the loss of Doug’s voice or musical line.

Highlighting the album would be the song In Hell, with the opening guitars sounding much like Silverchair’s Cemetery. When the vocal lines start, we are treated to solo lines sung by Drew Ingle, whose vocal style is very different from Doug’s. The two counterpoint later on in the song, making a very strong musical punctuation in the song. Other highlights of the album would be Onward Forward, which adds the strong voice from Monica Shea, Doug’s wife. Showing her vocal strength and musical talent, she is a backup voice, yet holds a distinct strength that rivals the boys.

A personal favorite of mine would be Agatha Lane. This song has been written since before their break, so is a nice tie to the old Spirit Creek. The tone of this song is noticeably more lighthearted and optimistic, making it the contrasting song on the album. Musically Agatha Lane reminds me of a mix between Lifehouse’s No Name Face and The Beatles, giving a wonderful feeling not heard on this album in this sense.

One weak point in the album would be Mirror Mask. The concept of the song works well for the album, but the execution of the song has been a thorn for them. The vocal lines become distorted every once in a while, then pop back in occasionally, making lyric distinction a guessing game. It starts off well, but once the song gets going, it’s missing something. It is musically a song that could have something more added to it, though what that could be is just out of grasp.

Other highlights of the album would be the cover photos as well as the art that makes its appearance. The front photo is a black and white industrial photo of downtown Milwaukee, taken from a distance in a field. On the inside is a street photo with a road barrier laying on the ground. The back of the album is a view of a street covered in snow. The band photo is also gives a nice industrial attitude to the band. Black and White always adds a different dynamic to photographs, and it coincides very well with the new dynamic of Spirit Creeks sound. The photos were taken by Drew Ingle and Laura Borzek. The original artwork on the CD front is done by Greg Schoeneck. The CD front is a man surrounded by flames. It’s a very wonderful piece to dawn the front of the album.

My overall recommendation for the album is if you liked Masquerade Spirit Creek, get it. This is a wonderful showing of their old style in a new setting. If you’re looking for the lighter Us Against the World music, this album is not for you. Be prepared for heavy guitars, angry lyrics and an overall sense of musical rage and lyrical awareness. Again, in my opinion, get this album and turn up the speakers, take in the full effect of A Culture of Unaccountability.

Visit www.thespiritcreek.com [2] for the latest updates, show announcements and more.