Dave Gross, author of Pathfinder and Forgotten Realms fiction, who Alana recently interviewed here at Flames Rising [1] stopped by to tell us a little about how his favorite kung fu movies inspired his writing. 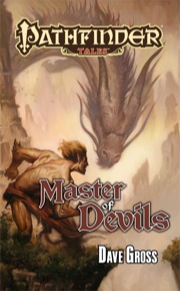 For inspiration in writing Master of Devils [2], the latest Pathfinder Tales novel, I steeped myself in dozens of kung fu movies. Some were straight-on martial arts stories from the heyday of the Shaw Brothers, while others were more recent blends of wuxia action with art-house photography. Among my favorites are the fantasy films of the 80s and 90s, many of which include a strong element of supernatural horror.

The first thing you need to know about kung fu movies is that any one of them can seem like five or six different movies crammed into one. Chinese screenwriters seldom stick to a single genre, so you’ll find elements of horror, romance, satire, political commentary, and even slapstick humor in what appears by the DVD cover to be a straight-up action film. Thus, when you’re looking for a “horror kung fu movie,” you shouldn’t expect a simple fright fest–although some of them have some great scary moments. More often you’ll find moments of terrific suspense or ghastly horror in between scenes of action or comedy.

Here’s a brief survey of some of my favorite kung fu movies with an element of the dark supernatural. Whether you’re a gamer, a horror fan, or a lover of action movies, there’s something for you in each of these films.

A series of wacky accidents keeps Cheung safe while his tormentors fall prey to the undead in various locations. When Cheung finally begins to suspect the affair, Tam hires a witch, Chin, to dispose of his rival. The witch’s partner, Tsui, disapproves of the scheme and ends up assisting Cheung. In a nice joke that clearly inspired a subplot in Mr. Vampire, a dishonest merchant substitutes duck eggs for the chicken eggs that can save Cheung from one of the restless corpses.

After a series of comic encounters with the undead, the film climaxes with a duel in which the rival magicians use the bodies of Master Tam and Cheung as their proxies, the former imbued with the spirit of the Sword God, the latter with the essence of the Monkey King.

The final scene of Cheung’s revenge on his unfaithful wife will (and should) shock most North American audiences, but in a film of such broad comedy it is meant to play more like the ignoble defeat of the Coyote after his many attempts to capture the Road Runner. Still, as moments of horror go, that’s the one that stays with me.

Zu Warriors from the Magic Mountain (1983)

[4]This Tsui Hark film is another mashup of genres, but its Blood Demon antagonist and the haunted chambers of the titular Mountain add a strong element of horror to a heroic quest with slighter elements of comedy, romance, and political satire.

The film opens with a war between East and West Zu, their soldiers dressed in bright red and blue uniforms. When the nimble scout Ti (Yuen Biao) falls afoul of his bickering commanders, he flees only to bump into a Red Army soldier (Sammo Hung). The two soon make a truce, only to be swept up in the advance of four other armies.

Ti escapes by falling down a cliff, where he finds himself beneath the Magic Mountain. In its chambers he finds a cult of demon-worshippers and restless dead. Fortunately, he also finds a master swordsman and begs to become his disciple. Soon a monk with his own follower arrives, and the four join forces to fight the dreadful Blood Demon. While a while-garbed mystic with prehensile eyebrows holds the monster at bay with his Moon Mirror, our heroes search for a pair of magic swords that can slay the demon. The dated special effects usually keep the monsters from seeming too horrific, but they include such evocative monsters as jar-ghosts, black-flag cultists, shape-changing avatars, and vicious blood crows. When the beautiful women arrive, the romance never slows the action for long, and the climactic scenes look far more Power Rangers than Crouching Tiger. Still, for those who can hold on for the wild ride, this film contains more inspiration per-minute than any other film I can think of.

[5]Even though it is set in the early 20th Century, Mr. Vampire’s story of necromancy could easily fit into an earlier age. Our heroes are Chau-sang (Chin Siu-ho) and Mon Choi (Ricky Hui), a sort of Chinese Martin and Lewis team. Both young men are apprentices to Master Kau (Lam Ching-ying), who tends the restless corpses of the recently departed. After a false scare of youthful mischief disturbs Master Kau’s undead charges and delivers a brisk action scene that teaches us the rules (the restless corpses hop rather than walk, and they can be pacified by a drop of blood or a sutra stuck to their brows), the story begins.

Obeying his will, the wealthy Yam (Huang Ha) wishes to re-bury his long-dead father. Canny Master Kau understands that the elder Yam was a dishonest businessman, and the fortune-teller who advised his burial cursed him to an undead existence but left this escape clause to spare his descendents from continued punishment. Naturally, the reburial plans go awry, and the elder Yam–a much more powerful form of hopping vampire–escapes to terrorize the town.

In a substantial subplot, the handsome Chau-sang attracts the amorous interest of a beautiful ghost (Wong Siu-fung), and goofy Mon Choi seeks to protect Yam’s daughter Ting Ting (Moon Lee) from the murderous corpse of her grandfather. Master Kau must protect them all, despite the interference of Ting Ting’s absurd and jealous cousin (Billy Lau).

The movie is rich with inspiration for gamers or writers seeking to include the accoutrements of Taoist sorcery in their campaigns or stories. Octagonal mirrors, cat’s cradles made of enchanted string, coin daggers, and the mystic power of sticky rice are all prominent devices.

Mr. Vampire is foremost a comedy, but the wire-assisted fight scenes rival the action in the best martial arts movies. And there are moments of great suspense and even horror, as when a hopelessly out-matched Mon Choi tries to hide Ting Ting from the blind vampire who tracks their breath. In fact, most of the action plays out like a survival horror scenario played at high speed.

[6]A Chinese Ghost Story pairs handsome young tax collector Ning Choi-san (Leslie Cheung) with the restless spirit of the beauteous Nip Siu-sin (Joey Wang). The story begins when unfriendly villagers suggest that the penniless Choi-san spend the night in a nearby temple without warning him the place is haunted. There he interrupts a duel between a Taoist sorcerer (Wu Ma) and a deadly swordsman, the latter of whom soon succumbs to the wiles of another seductive ghost.

Choi-san soon encounters Siu-sin and avoids becoming another victim by virtue of his accidentally backing into fresh-painted sutras that ward against spirits. But his gallantry impresses Siu-sin, and they soon fall in love, much to the displeasure of her demon master (Lau Siu-ming in a scenery-chewing, cross-dressing role).

After a cute sequence in which Siu-sin must hide Choi-san in her bath, the demon discovers her treachery and transforms into its true aspect as a wicked tree with a hideous prehensile tongue (which also provides some especially raunchy humor). Despite the valiant efforts of Choi-san and the sorcerer, the demon drags Siu-sin into the underworld, setting the stage for a daring rescue.

While it shares a color palette with The Bride with White Hair, A Chinese Ghost Story depends much more on clever plot twists and a healthy dose of physical comedy. Despite those reliefs, both the walking dead who haunt the temple and the hideous tree demon are nightmare material.

[7]More North American fans recognize the iconic image of Brigitte Lin from The Bride with White Hair than practically any other Chinese fantasy heroine. One of the great things about Lin’s Wolf Girl who eventually becomes the eponymous Bride is that she’s a complicated antihero and the perfect complement to the romantic lead.

Leslie Cheung plays Zhuo Yihang, the reluctant heir to the leadership of the Wutang Clan, one of several martial arts societies vying for supremacy. One of the rival factions is an evil foreign sect whose foremost assassin, Lian Nichang (Lin), falls in love with Yihang. Her feelings evoke a deadly jealousy from her sect’s leader, a monstrous pair of conjoined twins, the male half of whom lusts for Nichang. When tragic circumstances divide Yihang and Nichang, the later spontaneously ages, her long white hair becoming more deadly than her blade and whip. As the unstoppable witch, she destroys the Wutang. The rest of the film is full of bloody revenge with a beautiful, tragic image bookending the violence.

[8] Behind Plague of Shadows, a Pathfinder Novel : https://www.flamesrising.com/behind-plague-of-shadows/