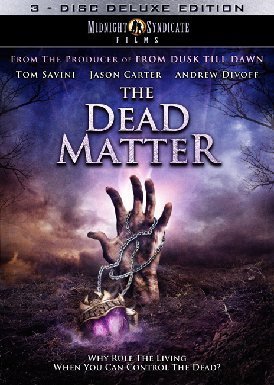 The Dead Matter: Original Motion Picture Soundtrack CD contains the score composed by the film’s director, Edward Douglas of Midnight Syndicate, as well as several limited-edition remixes of Midnight Syndicate songs and other music that appears in the film from bands like Lazy Lane, HipNostic, and Eternal Legacy. Midnight Syndicate’s Halloween Music Collection CD features over 60 minutes of songs hand-picked by Edward Douglas and Gavin Goszka to celebrate the band’s first 13 years. Both new CDs will also be available at Halloween retailers nationwide in August.
— 5/26/10

About The Dead Matter movie:
A guilt-ridden young woman desperate to contact her deceased brother discovers a powerful ancient relic that controls the dead. Her dark obsession drags her into the tangled world of two warring vampire lords (Andrew Divoff of Lost, Wishmaster and Tom Savini of Friday the 13th, Dawn of the Dead) each with his own sinister plans for the artifact and a vampire hunter (Jason Carter of Babylon 5) who will stop at nothing to destroy it. This chilling gothic dark fantasy co-produced by Robert Kurtzman (creator of From Dusk Till Dawn, KNB FX) features a haunting score by Halloween musicians Midnight Syndicate. It’s a mix of classic horror themes with modern twists and a touch of dark humor that will keep you on the edge of your seat.