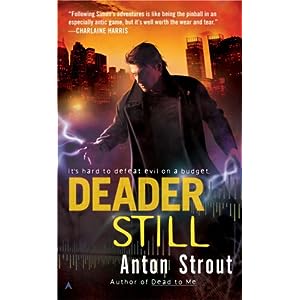 Anton Strout brings us more madcap mayhem in book two of the Jane chronicles (otherwise known as the Simon Canderous series, but his girlfriend, the ex-evil cultist Jane, totally steals the show). Now a member of the Department of Extraordinary Affairs after leaving her cultist ways behind, Jane is working in the Black Stacks (the scariest library in urban fantasy) and discovering that she has a talent for technomancy. In fact, she’s so good with magic and machines, she rescues her boyfriend Simon from an attempt on his life in his Oubliette test over his cell phone. Her new gig working for the ambiguously moralled Thaddeus Wesker, Director of Greater and Lesser Arcana at the DEA is going swimmingly — except for the tension it creates between her and Simon, who doesn’t like her boss.

And speaking of Simon… okay, the book’s really about him. His relationship drama with Jane (which can be as frustrating for the readers as for Jane and Simon themselves) is only a small part of the plot. As Dead to Me [2] ended, Simon had just been entered into the Fraternal Order of Good, or F.O.G., a group that predates the DEA and occasionally greases some back doors to fight evil rather than doing all of the correct paperwork required by the government. While it’s a great opportunity for Simon, it puts him on strange footing with his mentor and partner Connor, who has always outranked him in the past. Now that they’re equals — and Simon has access to tools that Connor doesn’t — Connor seems withdrawn. The rank issues aren’t the only thing driving a wedge in their relationship, but Connor isn’t talking about the rest, and Simon is unable to uncover the real troubles, despite his best efforts.

So, Simon’s got relationship issues with the two most important people in his life — some of them that he creates in his own head — but at least work is going his way, right? Well, maybe and maybe not. It looks like he’s discovered a vampire attack, after 737 vampire free days for the department. If he’s wrong, though, his reputation could be on the line. If that weren’t enough to keep Simon busy, a woman from his past, the art thief Mina, wants to call in one last favor on a job… and if Simon doesn’t play along (or reveals the truth), Jane’s life could be at stake.

I loved Dead to Me, so Deader Still had a lot to live up to. Despite the whole save-the-world plot, the core of the novel is really Simon’s relationships and how he has to overcome his own insecurities to really connect with the people that he cares about, which really increases the personal stakes. I wanted to smack Mina around a lot of the time, and man, did I ever want Simon to just confide in Jane and tell her the truth, but I also wanted Peter Parker to just get over it and tell Mary Jane about his secret identity early on, too, so that could just be me. Deader Still doesn’t stand on its own the way Dead to Me does, but it’s a great second installment, and it leads right into what-happens-next at the end. And overall, it has that same fun, action-keeps-going feeling that Dead to Me introduced, and it’s the fun of this series that keeps me coming back. The adventures of Simon (and Jane!) are definitely worth checking out.

[5] The Age of Ra Review : https://www.flamesrising.com/the-age-of-ra-review/