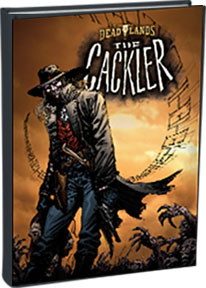 [1]Pinnacle and Visionary Comics team up to bring you The Cackler graphic novel–a mystery almost 20 years in the making!

Stone stalks the High Plains seeking heroes to kill. The Cackler hunts the Weird West in search of a mysterious girl called Rachel. Both of these killers are stone-cold dead…Harrowed…and what they’re about to do kicks off the next era in the story of Deadlands!

Join us for a walk on the DEAD SIDE as we create two very different but linked projects that start us on the road for the 20th anniversary of Deadlands coming in 2016.

This page is for the Cackler Graphic Novel … for more information on the Stone and a Hard Place Plot Point Campaign Kickstarter, click here [2]!

The Cackler is an ancient Harrowed in search of a very particular blood relative for a nefarious and mysterious ritual that could change the world of Deadlands forever!

The Texas Rangers and Agency have invoked the “Twilight Protocol” to unite against the Cackler and are doing everything they can to stop him. They’re joined by Morgan Lash—a former Wichita Witch who’s shed her dark past to protect the girl the Cackler searches for—her sister!

Shane Hensley wrote the Cackler’s long-awaited tale, and it was edited and kicked in the rear by C. Edward Sellner of Visionary Comics and Deadlands Brand Manager Matthew Cutter.

Art for this tale of Weird Western woe is by the legendary Bart Sears, one of the true masters of the medium. He’s worked for EVERY major comic publisher, from Marvel to DC, Valiant to Crossgen. Colors are by the amazing Michael Atiyeh, who includes DC, Dark Horse, and Star Wars credits to his name!