Descend into Avernus with New Releases! 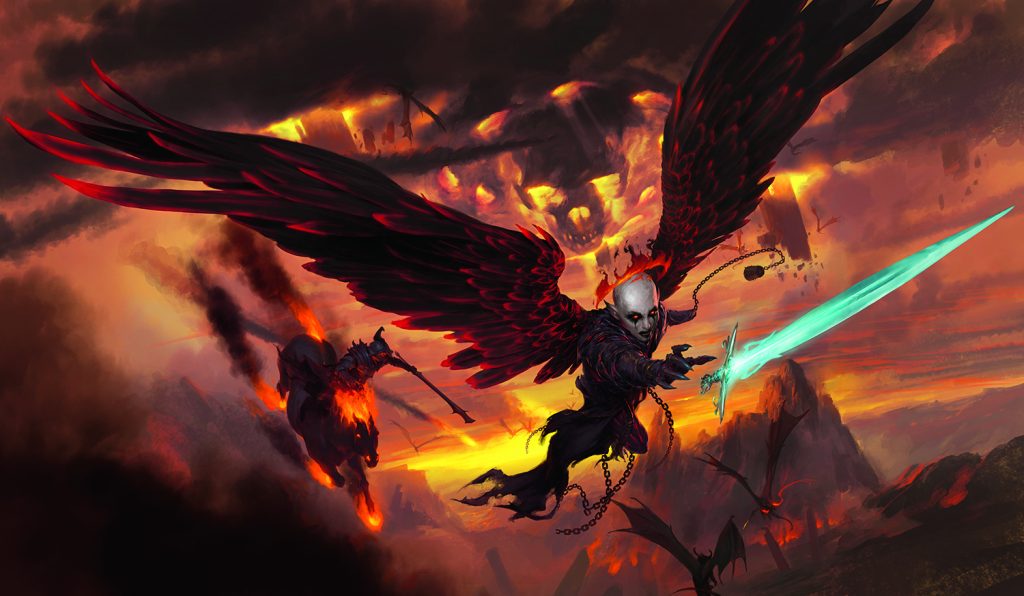 What’s next for Dungeons and Dragons? Descend into Avernus with three new releases!

From the streets of Baldur’s Gate to the front lines of the Blood War, the dice you cast might be your last. The Baldur’s Gate: Descent into Avernus Dice & Miscellany set [2] includes 11 dice, a dice tray/box, 20 double-sided cards with exclusive content, a foldout map of Avernus, and even a sizing chart for the demons and devils of the Blood War! 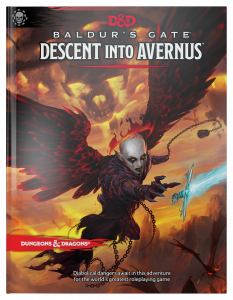 [3]The newest Dungeons & Dragons adventure book takes players (level 1 to 13) from Baldur’s Gate to Avernus, the first layer of the Nine Hells. Players become embroiled in a plot that sprawls from the shadows of Baldur’s Gate to the front lines of the planes-spanning Blood War! Do players have what it takes to turn infernal war machines and nefarious contracts against the archdevil Zariel and her diabolical hordes? And can they ever hope to find their way home safely when pitted against the infinite evils of the Nine Hells?

Baldur’s Gate: Descent Into Avernus [4] also introduces the infernal war machines — battle-ready vehicles for use in the Blood War between devils and demons. Players can customize these engines of destruction to traverse the deadly depths of Avernus.

Bring your Hell to life with this companion supplement for Baldur’s Gate: Descent into Avernus!

Encounters in Avernus presents more than 60 short encounters for the wasteland of Avernus, the River Styx, and the city of Elturel. Keep characters busy with these story-rich encounters that help flesh out the first layer of Hell. The supplement is great for Baldur’s Gate: Descent into Avernus or any infernal adventure!

Two longer encounter chains are included to help you craft an amazing story with Tiamat or Zariel!

Expand your Baldur’s Gate: Descent into Avernus game with four new adventure locations, complete with plot hooks and NPCs, plus five new magic items all found in the holy city of Elturel! This supplement adds more challenges for characters of levels 5 to 6 who enter Avernus through the city.

Save Helm’s Shieldhall from attack and rescue Hellriders and famous paladin Ontharr Frume!
Visit famous tavern A Pair of Black Antlers to claim a legendary treasure!
Explore the infernal horrors of Dragoneye Dock House!
Get a taste for exotic meat at Owlbear Butcher Shop!
Maps and a printer friendly version included as separate files!

Elturel is in Hell. It’s up to you to save it.

This product is meant to be a companion to Baldur’s Gate: Descent into Avernus and requires the adventure.

[8] Dungeons & Dragons Gets Down with D&D Live 2019: The Descent : https://www.flamesrising.com/dungeons-dragons-gets-down-with-dd-live-2019-the-descent/

[10] Dungeons & Dragons Announces The Stream of Many Eyes! : https://www.flamesrising.com/dungeons-dragons-the-stream-of-many-eyes/

[12] Spice Up Your D&D Story With the Sword Coast Adventurer’s Guide This Fall : https://www.flamesrising.com/spice-up-your-dd-story/