Kevin and the Devil House

Kevin Lucia is the author of Hiram Grange and the Chosen One [1], book four of the popular series. He is also an editor and reviewer for Shroud Publishing [2]. In this guest post he talks about what sparked his interest in the horror genre. 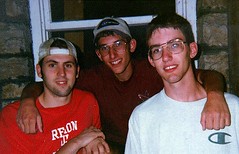 I remember when I first became interested in horror.  The summer of 1996, I spent lots of time with my friends bumming around Otsego Lake, NY. My best friend’s grandmother owned a cabin there, so we spent all our weekends riding the boat, eating and napping on the dock.

One weekend we got bored. Which country boys tend to do. This usually means trouble. We were lying around on the dock when my friend Joel remarked, “We should take Kevin to the Devil House.”

My best friend Chris: “Sounds good.” His brother Aaron: “Sure. Why not?”

Me: “What the hell is the Devil House?”

They explained. Several years ago they’d discovered an old Victorian farmhouse in a nearby field. They’d explored it and dubbed it the ‘Devil House’ because of the requisite ‘666’ scrawled on the walls. It was probably just a local late night party spot – but we were bored. What else was there to do?

If I’d been better versed in horror movies then, I would’ve realized how clichéd even THAT sentiment was.

Anyway, we trooped down the dusty road to said field, struck out for the old house. I’d just turned twenty. Didn’t scare easily, but even then I thought something about the house looked odd. Wrong. Of course, it was run-down and in the middle of an old field. Easy for flight of fancy to take over.

Looking back, I’m still glad it was high noon, however, and not night. Anyway, when we reached the house they of course encouraged me inside first. I crawled through a window and entered a place that would change my literary interests forever.

The room I entered looked dusty, cluttered, and old. At the far end, two doors on either side of a fireplace led into the next room. Anyway, from my vantage point I saw bricks on the floor, except they looked organized, almost laid out in a pattern.

“Hey. Guys. When did you come here last?”

“Not since last spring. Why?”

I craned my neck. “Well, last time…did you see bricks on the floor in the far room? Like…in patterns?”

Knowing him as I do, I pegged Joel: “Okay. Admit it. You planted this.”

Chris spoke, and him I trusted. Implicitly. “Nope. We didn’t do anything. Honest.”

They all scrambled inside. We peeked into that other room. Now, compared to the graphic vistas offered by modern horror, what we saw probably doesn’t seem shocking at all. But to four kids relatively innocent to the world’s darker corners, what we found felt eerie, to say the least.

In the room’s center was a huge inverted pentagram, traced in brick. Meticulously traced, mind you. We were young and innocent and didn’t have much in the way of a frame of reference, but to us this didn’t look like the work of kids.

Slowly, we investigated the room, found even more disturbing things. Like upside-down crosses drawn on the floor and on the walls, what we thought were Bible verses. Written backwards. 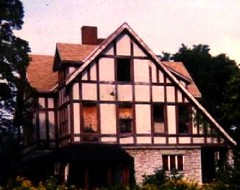 In retrospect the scene seems incredibly staged, right? Like the set of any number of low-budget horror movies about a Satanic cult. Still, none of us possessed any experience with this stuff. It had come from some strange world entirely outside of our own.

Of course, being bored country boys and avid church goers (avid in that our parents made us go), we did what we thought best.

We trashed the place.

Messed up the pentagram.

Tossed the bricks out the window.

Afterward, drunk on our own naive bravado, we explored the house, found nothing more interesting than some graffiti, then left for other pursuits.

Next weekend, bored and lounging on the dock…we set a pattern that would hold into the next summer.

Imagine our surprise when we returned and found the brick pentagram completely restored to near perfection, as we’d found it the week before.

Believe it or not, this continued for weeks. We trashed the pentagram and threw the bricks away, only to return the next week to find everything restored. Looking back, it seems obvious: this was a regular meeting place for some Wicca coven of sorts. Probably harmless kids screwing around.

Anyway, we kept it up. Started getting cocky. At the end of the summer, we pulled our coup de grace – we didn’t just throw the bricks outside, we carted them into the woods, and then we spray-painted the entire room.

Summer ended and as all summer things, the house was soon forgotten. However, a year later, after several weekends talking around the subject, Joel finally brought it up: “Think we should hit the Devil House?”

Well, of course we did.

We got quite a surprise, however. First: the window we routinely crawled through had been boarded up. You’d think we’d take that as a sign and leave well enough alone.

Next, the room the window led into had been cleaned. Swept. Odd, but hey: maybe whoever owned the house was trying to straighten it up and sell. The next room – the one containing the pentagram – floored us with its implications, however.

First of all, someone had put in an ENTIRELY new floor. Fixed the window. Painted over our pink redecoration.

The pentagram had been carved into the floor this time. In the center, what I can only describe as rows of runic lettering. At each pentagram point, someone had carved little stick-figure animals, each one crossed out with streaky-red X’s, except for one: a human.

As you can imagine…we booked.  To this day, I’ve never been able to convince my friends to return.  In the cold light of adulthood, there are many ways this experience can be rationalized and explained away as trivial.  For me, however, it marked a turning point in my reading and writing interests.

Suddenly, aliens and creatures and monsters from other planets paled in comparison to the terrors and monsters that could be found right here, in dark and shadowy corners on our own world…or inside the human heart.  My friends knew I wanted to be a writer, and they insisted I someday write about that house and what we found there.

I did, right away – and wrote half of the worst horror novel ever.  I realized this keenly after abandoning science fiction and diving headfirst into horror, reading and learning that my early efforts were clichéd and overdone.   However, I write horror now because of that experience, because after all these years I still find the dark shadows of our own world and souls infinitely more intriguing than the shadows of deep space.

I eventually did write about this house, and a fictionalized version of it finally appeared in its best version as “Old Bassler House” in Shroud Publishing’s Northern Haunts flash fiction collection.  However, a longer version exists that some friends and I created as a graphic e-novel for fun several years ago.

I offer it to you now free after this post, through Issuu.   It’s a very early effort, so take it for what’s worth, and please:  if you have the chance to investigate old, broken down houses out in the middle of abandoned fields:  do it.   Don’t pass it by.  Who knows what path it will take you down?

Just make sure to go at noon.  When the sun’s high.