The original standard for fantasy roleplaying is taking another step in its storied pop culture history as the Dalelands of the Forgotten Realms is brought to life for gamers and fantasy enthusiasts across the world. Atari, one of the world’s most recognized publishers and producers of interactive entertainment and Bedlam Games announced today the release of the highly anticipated Dungeons & Dragons: Daggerdale on Xbox LIVE Arcade for the Xbox 360 video game and entertainment system from Microsoft and Windows PC.

Media have rallied around Dungeons & Dragons: Daggerdale’s console based hack and slash qualities in the RPG genre:

• “At its heart, Daggerdale is all about dungeon crawling, baddie-bashing, and loot-scoring – and I don’t mean that in a derogatory way…” – RPGFan

• “Upon the lofty pedestal, you discover an ancient artifact known as the controller…” – GamesRevolution

• “…the way Dungeons & Dragons was always meant to be played.” – GamePro 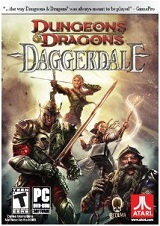 [1]Dungeons & Dragons: Daggerdale [1], a hack and slash action role playing game set in the deep mythology of the Forgotten Realms, is the first Dungeons & Dragons video game for connected consoles. Players are summoned by a mysterious mage and given the duty of defending their homeland as Rezlus, an evil Zhentarim Cleric looks to bring the power of the Black Lord Bane to Daggerdale. Restore order to the Dalelands by unlocking the secrets of the Mines of Tethyamar, defeating the evil within the treacherous Tower of the Void, leading to the final confrontation with Rezlus himself.

Players can take on the role of the melee expert Human Fighter, the quick and nimble Elven Rogue, the master of the arcane arts Halfling Wizard, and the powerful divine Dwarven Cleric. Gamers use intuitive pick-up-and-play combat combined with a wide assortment of weapons, feats and powers to defeat a wide range of deadly enemies. Players can level their character, unlocking three tiers of powers, and an extensive list of feats to create a truly unique character. As the player levels, they can add additional attribute points to their ability scores, further enhancing the performance of the character. The action-packed RPG gameplay allows for solo and co-op play for up to four players.

Dungeons & Dragons: Daggerdale [1] carries a suggested Windows PC retail price of $14.99 and is available on XBLA for 1200 Microsoft Points.