Dragon and Masks of the Mythos for Scion 2nd Edition at Kickstarter!

The ancient powers never fully went away. They wander our roads and cities, mingling with the teeming masses of humanity. Characters in Scion Second Edition begin as humans touched by fate, heirs to great powers and incredible destinies. In the core setting for Scion, characters discover they are the children of Gods, inheriting mantles, accomplishing great deeds, and deciding their own destinies. It’s a game about divinity and humanity, and everything in between — and now, with these two expansions, everything beyond as well. Scion: Dragon and Scion: Masks of the Mythos open new pathways, new origins, and new secrets for Scion Second Edition.

But which of these two pathways will you wander down? 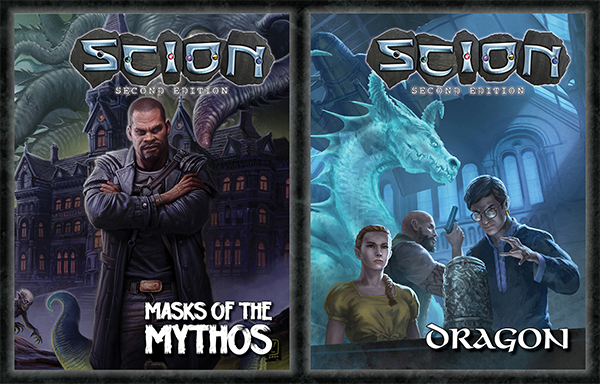 Perhaps you aren’t the descendant of an ancient deity, but instead have been chosen by a Dragon. The myths about Dragons are true, but not the whole truth. Dragons went into hiding after too many of their numbers were slain for their deeds, and have waited for centuries until they could reclaim The World as their own. They blame the Gods and Titans, along with their worshipers, for their downfall. And they will gain power from the Titanomachy between God and Titan, but from the shadows, without showing their claws.

You carry inside you a dragon, something you don’t fully understand, but need to in order to control. To claim your heritage, you must seek out clues to the truth, embrace the memory your draconic ancestor bestows upon you, and perform missions you might not understand. You are tasked to be the Dragon’s operative in The World, but you set your own destiny.

Discover your heritage, embrace the dragon, and claim your inheritance.

Or perhaps you’ve been touched by something different, something alien and ancient. The Mythos is older than humanity, Gods, and Titans, with an unknowable otherness that can shatter them all. This slumbering horror lurks in the shadows, carrying out its cold machinations with little regard for those beneath it until it requires pawns.

Those that touch the Mythos are forever awakened. The World explodes into full view for them, empowered by these alien beings that alter their very essence, the ability to break Fate and leave the walls of reality weaker in their wake. These human embodiments of the Mythos are not good or evil; such easily definable morality is for lesser beings.

What does one do when their power comes with a cost?

Scion: Masks of the Mythos and Scion: Dragon are two new entries in the Scion Second Edition RPG line, building on Scion: Origin and Scion: Hero. Each of these books adds entirely new elements to the setting, and explores new territory within the World. 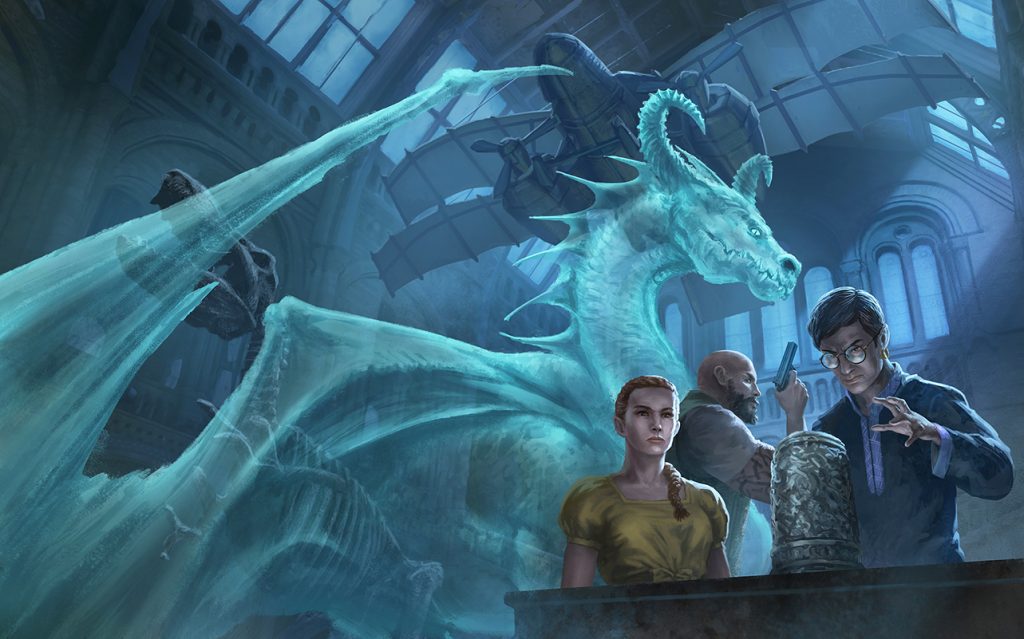 Scion: Dragon builds on the foundation of Scion: Origin, taking the game to the in-between spaces kept dark as the bright light of divinity shines elsewhere. It is a game about playing both sides against the middle as you desperately try to find a foothold in the World, all the while discovering who you are and what you want.

Play as long-lost descendants of Dragons, called Heirs, who act as agents and operatives enacting their ancestors’ will as they delve into draconic history and memory. The World knows Dragons primarily through the mythology told to them by pantheons. Some of this is true; some is what Dragons would call propaganda. An Heir may descend from Dragons, but she knows just as little about dragon kind as any other mortal. The truth about Dragons is steeped in mystery, and they prefer it that way. Better to keep hidden than to risk getting wrapped up in the Fate of the pantheons. Better to wait until the Gods and Titans wear one another down than to join the fight directly. Better to amass power for a decisive strike than to play your hand too soon. As the Heir becomes more embroiled in her Dragon patron’s schemes, she learns more of the truth, and must choose if she wants to be a player in their game, or forge her own path.

Masks of the Mythos is a sourcebook for Scion: Origin and Scion: Hero. While the majority of Scion focuses on real-world mythologies and religions, Masks of the Mythos is a step off that path into a more fictitious World. The material presented here is as canonical to an ongoing Scion campaign as every individual Storyguide and group wish it to be.

Find out more information, get early access to the manuscripts, and more at Kickstarter.com [1]!

[2] Chronicles of Darkness: The Contagion Chronicle is now available! : https://www.flamesrising.com/chronicles-of-darkness-the-contagion-chronicle-is-now-available/

[3] Matthew Dawkins is infected with the Contagion Chronicle : https://www.flamesrising.com/matthew-dawkins-is-infected-with-the-contagion-chronicle/

[4] Once upon a time, they took you from your home. Changeling: the Lost Second Edition is available now! : https://www.flamesrising.com/ctl2e-available-now/