Caverns of the Wise Minister [1] is a dark fantasy setting using 5e rules. Halfway between the realms of life and death, a new civilisation of lost souls has sprung up under the thrall of a creature older than gods that calls itself The Wise Minister.

In Caverns of the Wise Minister [1], you play denizens of the city of Sepulchre, descendants of those plucked from their homes on the surface, trying to forge a new life in the darkness of the Underworld. If you’re clever, quick, and fortunate, and you live long enough to find your niche, you might learn how you got here. Maybe you’ll even set things right.

Once upon a time, there stood an elven city called Silverhome, and an aboleth and a deity vied for power over it. The god Empyrea struck down the aboleth, and in revenge it drowned her favoured city. The survivors set out for the Underworld to beg for mercy from the god of death and reclaim the souls of their beloved dead.

Instead, they fell under the influence of the being called the Wise Minister, the same vengeful aboleth who had destroyed their home. They built a city in its domain, and it delights in keeping them deep below the earth, tormenting the god they have long forgotten. But that isn’t true vengeance. That can only come when Empyrea is dead. She stole the Wise Minister’s city, and it has nursed that grudge for millennia.

Trapped between life and death, pawns in the games of gods and monsters, thousands of creatures eke out a living in the dark. Those in power know it was not always thus, but it serves their interests to have it remain so. 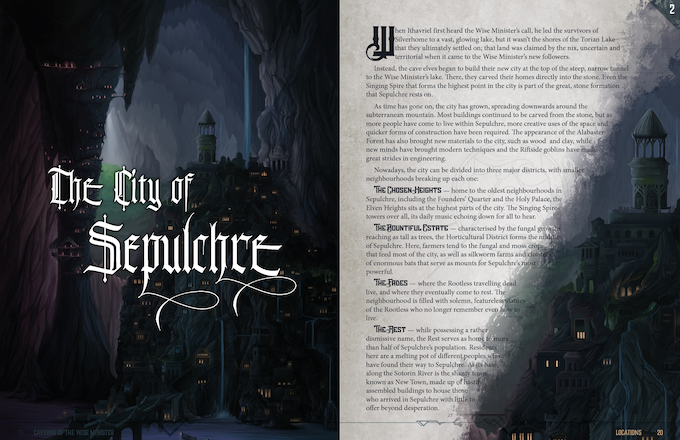 Sepulchre is a city based on grudges and lies. Stories set here deal with cycles, especially cycles of vengeance, and memory. The aboleth known as the Wise Minister remembers every offence committed against it and plans to avenge them. The cave elves believe its lies — and create a false narrative about their place in the city. Newcomers resent power structures they had no say in, and outsiders try to leave before they can get tangled in the city’s web of traded favours and obligations.

Adventures here feel stifling: there are always constraints, be they physical and environmental — no sky or sun, or dangerous monsters that limit how far it’s safe to range outside the city.

You can download it for free over at Kickstarter.com [1].

[1] Caverns of the Wise Minister: https://www.kickstarter.com/projects/exstasisgames/dreadful-realms-caverns-of-the-wise-minister-0?ref=FlamesRising