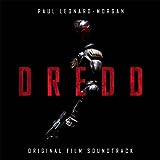 To properly review Dredd, I should share with you a couple of important niggly bits. First, we saw Dredd in the old-fashioned version, the two-dimensional format. Second, I haven’t read all the comic books so I’m not as well learned as others might be. Yes, yes I know. This is awful of me, to be sure, but he’s on my pile of “have to read soon.”

Going into the theater, I had heard the reviews. Flat characters. Boring storyline. Not much better than the original. Then, I skimmed comments and anecdotes from people I consider to be professionals. “Don’t listen to the critics,” they said. “Go see it. It’s what a comic book movie should be.”

And I’m glad I did. In my mind, Dredd was “the” comic book movie of the summer, second only to The Avengers, and far better than Dark Knight Rises. Tightly scripted, the audience catches the barest of glimpses of a world post-apocalypse. Then, we hone in on Dredd himself played by Karl Urban. This is a different kind of superhero. For starters, Urban never takes off his mask and everything he does paints a disciplined portrayal of an infamous Judge, an individual with the authority to carry out the Law as he sees fit. His is an iconic character with tensions boiling just under the surface. He keeps his emotions in check and his past buried.

To contrast, Anderson is a questionable recruit who he’s ordered to evaluate. Anderson does what Judge cannot; she tries to deal with a deadly situation via her humanity and, as a result, is almost direct opposite to the fierce Dredd. Facing nigh impossible odds at a megolithic housing complex called “Peach Trees,” the pair maneuver through blood and explosives to unravel a conspiracy to distribute Slo-Mo, a new drug.

The plot was brilliantly constructed because, in a world like this, it’s easy to lose oneself in the world. Dredd isn’t a sweeping epic or a mystery that spans an entire city; the film focuses on one of the many reasons why humanity’s life expectancy is so short. In other words, the story was written as a portrayal of the world itself. Everything may be going to hell, but no one cares about the rest of the megacity, they have to mind themselves — or else.

I feel that viewing this as a comic book movie doesn’t do the film justice because the expectations for those films are all over the map. This was a film created as if it wasn’t a comic book movie, which is why I loved it. It’s real, it’s gritty, and it’s accessible. Emotional depth on Judge’s part isn’t warranted here; the other characters have plenty of stressful, fearful, and tense moments to paint a picture of what this world is like. Instead, I think about this film as a cross between Priest and the original Matrix. It has plenty of stylized violence, gorgeous cinematography, and a perfect soundtrack. (Which I downloaded already. Hee. It’s a-w-e-s-o-m-e!)

For a different take that provides a few more spoilers, you can read the Dredd review on NPR [2]. For others, you can read the critical Review: ‘Dredd 3D‘ has the cast and the look but not the feel [3] and a positive Dredd 3D review on ScreenRant [4]. I should also point out that this film is rated “R” for a reason. This is NOT a kid’s movie. The level of violence and tone is akin to Sin City, in my opinion.

Before I leave you, I feel I need to circle back to ask that age-old question: “Who would like this movie?” If you like post-apocalyptic movies and don’t mind stylized violence with lots of action and explosions, then you will adore this film. I did!