Flames Rising is pleased to present you with this exclusive preview from the new The Dresden Files RPG [1] from hobby game publisher Evil Hat Productions.

This new hobby game is based on The Dresden Files series of books by best-selling author Jim Butcher; the game’s setting and characters cover the first twelve books in the series along with some additionally published material. The Dresden Files RPG employs the Fate game mechanic, which was also used in The Spirit of the Century RPG [2] and is offered in two volumes. Volume One, which is entitled Your Story [3], was designed around building the character that you want to play. Volume Two, which was dubbed Our World [4], offers you an extensive look into the creatures and characters within this setting.

For more information on how to order the e-book or the print edition of The Dresden Files RPG: Your Story and Our World, be sure to scroll down to the end of this post.

Preview of Jenny Greenteeth from The Dresden Files RPG: Our World

[3]Jenny Greenteeth was a Sidhe of the nixies of faerie-kind and a member of the Court of Maeve, the Winter Lady. She appeared as a tall, slender girl, pale of skin, emerald of hair, with supple curves. Her face was sweetly angelic, that sort of girl-next-door pretty and sexy. All this hid her green teeth and bloodlust.

Harry Dresden first encountered her during the Summer Knight case, where he successfully resisted her charms. Later, she was seen leading shellycobbs during the Faerie War over Chicago. Because of the Alphas’ participation in killing the Tigress and following Harry during the Faerie War, Maeve sent Jenny to disrupt the wedding of Billy Borden and Georgia McAlister.

During the “Something Borrowed” case, Jenny kidnapped Georgia, placed her in an enchanted sleep, stashed her in Undertown, and surrounded her with shellycobb guards. Then she took Georgia’s place in the wedding, hoping to get Billy under her thrall. Luckily, this plan was foiled by Harry and Karrin Murphy, though Jenny nearly drowned Murphy in a punchbowl. Billy and Georgia (released from her sleep by Billy’s kiss) transformed into their werewolf forms and killed Jenny together. 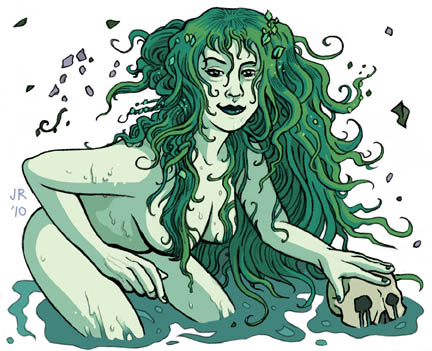 HARRY: How to put this delicately? Billy, you and Georgia didn’t actually, um, swallow when you chowed down on Jenny, did you?

BILLY: Nah, we just gnawed on her a lot. You ever taste alligator meat? It tastes like a cross between whitefish and chicken. Jenny Greenteeth was like that, only with this even weirder minty-rot flavor underneath. Not very appetizing, I must say.

[4] She uses Glamours to look like what she’s not, and Incite Emotion—almost, but not quite, redundant with her Glamours—to smooth any rough patches in the disguise. Between the two, she can lay a sleepy whammy on someone, given enough time (which she had, with a captive Georgia). She was a nasty piece of work. Rest in pieces, bitch.
Total Refresh Cost: –10

This preview was provided by and published with express permission from Evil Hat Productions exclusively for FlamesRising.com.

Both Your World and Our Story from The Dresden Files RPG are available for you to purchase and download through the Flames Rising RPGNow Shop [6] in eBook format. If you would prefer a print edition, you may pre-order either supplement at the Evil Hat Store [7].

[2] The Spirit of the Century RPG: http://flamesrising.rpgnow.com/product_info.php?products_id=28296