Driving Through the Desert Review 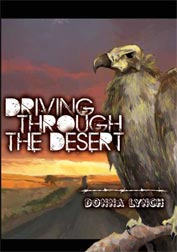 “How I wish, how I wish you were here.

Swimming in a fish bowl,

Running over the same old ground.

And how we found

Wish you were here.”

– Pink Floyd, “Wish You Were Here”

Perspective is the most powerful force at work in the universe. The angle, pitch and yaw of how things are viewed, how things are not seen, and how things are interpereted by the human heart and mind’s eye forges reality for an individual. Often times this reality, perceived by the individual, exists inimical to equidistant realities nurtured and sustained by other individuals-at-large.

Kam and Henry are on the run from one place to another place where they hope to get lost in the din and bustle of a city. They have no money to speak of. They have no resources. They have a stolen car, a set of blood-soaked clothing for each of them, and each other.

The desperation and tension that Lynch is able to convey from the opening salvo of the story is relentless. Consternation dominates the vast majority of Kam and Henry’s story as they try to make sense of their situation and, in kind, survive their situation as it evolves around them through circumstances, memories of what led them to where they have come to travel, and coping with grief while each are in their respective states of individualized shock and awe.

To dive right in an tell a potential reader what Driving Through the Desert is about would spoil the whole of the story for the reader. What is more important, in my opinion, is the expression of what the novella is not about. There are no vampires. There are no zombies. There are no werewolves lurking in the desert crags under a full moon. There are no monsters other than sorrow, anger and regret persuing Kam and Henry across the desert. The horror presented to the reader is not necessarily abject. The horror is a bit more subtle and surreal. The horror of Driving Through the Desert is encompassed in the shallow breathing and rapid pulses of a young woman and man, filthy, stinking of road grime, sweat and someone else’s blood as they run from one reality and hope for a new one at the end of an exceptionally finite tank of gasoline.

Because even in hell, there is hope.

Lynch is a powerful author. She does not waste much time with character sketches and appearances. She has the ability to give very basic descriptions of her protagonists and allows the readers’ minds to build the characters in their heads for themselves. This technique almost forces the reader to use the tatters of clues afforded by Lynch to create Kam and Henry from head to toe, and in doing so, the reader starts to fall into a sense of caring and fear for the pair. However, Lynch’s true power is in her affinity with the immersion of the reader into a setting that, for lack of a better descriptor, is simply “wrong” on so many different levels at many different times for many different reasons. She is able to knit a world from the wasteland of the generic “desert” and turn it into something darkly mystical and instinctually foreboding. She takes dust and vultures and makes them ill omens. She takes a lonely, sand-weathered diner and makes it into an abbatoir. She takes two people who could be any of us or any of our friends and family and she tosses them into this world head-first by the scruff of their necks. Lynch’s ability to convey the sense of loss, the nearly sterile anger born of grief, and the confusion of complete and total unpreparedness for a given situation are expressed through her written word in the same manner that a barber runs a straight razor across a customer’s throat with a single, fluid motion, wipes the razor on his apron, and repeats the action. When Lynch’s blade has passed over the reader’s conciousness, the smooth flesh radiates with the empty coldness of separation from that which has become familiar.

It almost seems that while the author is fearless in her expression of her ideas, her protagonists are nothing even close. Terror and tension are all that Kam and Henry have to keep them company through their drive, and Lynch ensures that niether of them get much of a break from the former or the latter.

A mere 95 pages from introduction to d’enouement, Driving Through the Desert is so fast-paced, so jacked up to a nearly “Eraserhead” level of tension (ironic, given the author’s name), and so artfully painted with words that tend to pluck at the reader’s emotions like a cello, the book is almost like experiencing what the coyote felt every time he fell into a canyon and made a little mushroom cloud when he hit the bottom as the roadrunner “meep-meep!”‘ed at him.

It will knock the wind out of you, if nothing else.