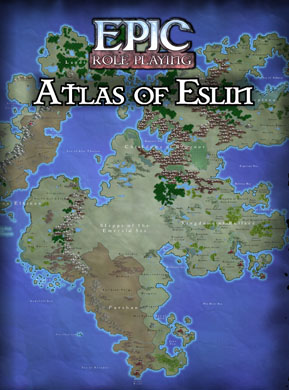 Dark Matter Studios, producer of the well-received fantasy rpg Epic Role Playing [1], has released its latest offering, the Atlas of Eslin. Weighing in at over 300 pages, the Atlas contains eight continents’ worth of diverse cultures, compelling story hooks and varied professions.

A companion to the Epic RPG Game Manual [2], the Atlas is designed to be used by GMs and players as a complete and ready-to-play campaign world or as a modular salad bar of ideas for homebrew settings.

“One of the most vocal requests we’ve had from fans in the past few years was for a wider range of opportunities and backgrounds for their characters. So we packed eight different continent-size arenas for adventure into a very reasonably priced volume,” commented Kent Davis, one of the two principal partner/designers.

“Each of these realms is designed to support divergent play-styles, hooks and adventures. Desert nomads? Oppressed peoples? Stone age tribes? Sweeping empires? Theocratic republics with living gods? No problem. We’ve also provided a GMs’ toolbox chapter full of thematic and organizational hooks for each realm, as well as detailed examples of population centers and loads of other supporting material.”

The Atlas is completely compatible with the Epic Role Playing ruleset contained in the Game Manual, and offers over two hundred culturally defined professions to characters starting off on their road for adventure.

Offering a platform that is flexible and realistic, Epic RPG system still retains enough opportunities for death-defying heroism to satisfy the wildest imagination. Highlights include classless character design that integrates characters into a society through culturally defined professions; elegant and choice-filled combat; unique magic with disciplines such as the arcane science of metaphysics and the body magic called shen; a flexible skill system based on talent that allows players to customize their character’s growth with skills, specialties, masteries, and grandmasteries; and a fantasy setting abundant with disparate races, astounding civilizations, and captivating geographies.

In both soft- and hardcover, the Epic RPG Atlas of Eslin is now available for purchase from the Epic Role Playing store [1]. Look for it soon on amazon.com and at selected retailers.

flamesrising.com: “Epic Role Playing… for some folks it may be the Holy Grail that they’ve been searching for.”

About Dark Matter Studios, LLC. Dark Matter and Epic Role Playing (http://epicrpg.com [1]) are based in the beautiful mountain town of Bozeman, Montana. Dark Matter is committed to making games that we ourselves want to play, not corporate products tested for brand maximization. We believe that intricate, engaging story and jawdropping, detailed action can coexist. Epic Role Playing is a game made by players for playing.