Whether you’re in this industry of alternative media, or whether you cover this industry of alternative media, there are certain milestones, certain times of the year, places, etc that just stick out and you have to plan on the fact that you’ll be there, you’re going to be there, you’ll have to be there or something close to that line of thought. Because, if you aren’t there or don’t go, then you’re going to miss out on some really great opportunities. Of course I’m talking about conventions. Yes, that (now) time honored tradition of packing up your favorite tee shirts and comfortable shoes, and getting yourself to an expo/convention center huffing your way through town, and breaking your way through the ebb and flow of fan boys, both costumed and under clothed. Some of them unwashed, many smelling like some third world open air market. But the world of comics/alternative media/books and everything else is changing. Almost as fast as technology itself, you know there’s this thing called Moore’s Law, right. Which basically states that technology will surpass itself and its current limitations every two years or so, which if you look back, even in your own life time, well I think at least- you could pretty much agree with that. Do you remember Tandy, do you? Now, look at your phone. In my case there’s more computing power in my phone, seriously, than there was in our first family computer, and consequently yes, it was a Tandy. So what does this have to do with Comics? Or for that matter Comic Cons?

Nothing and everything, all at once, confused?  Yes, I was too, especially when I walked onto the floor of Wizard World Chicago 2010. Caution, I am about to go down memory lane, and that can be a dangerous sort of journey, filled with forgotten weekends and mysterious rashes and jelly, read on at your own risk. 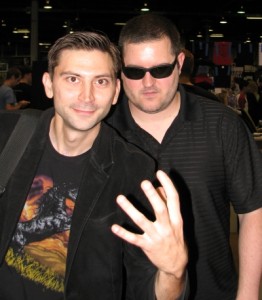 You see my first experience with a real convention, other than the local retailers getting a couple tables and blowing out their horrifically overpriced golden age back issues at the Knights of Columbus Hall down the street, was in fact at Wizard World Chicago way back in the dawn of the 21st century; yes of course I am talking about 1999. For those of you who were, at that time, playing with your older brothers non mint blister carded G.I. Joes and unboxed first generation Transformers, you know the metal ones that most likely contained a tragic amount of lead paint; this was a heavy time in the industry. Comics had just come off the buyers and sellers craze, the variant cover craze, the mega “independent” studios weren’t yet all that consolidated, and Todd McFarlane was still drawing things. Yes kids, Todd McFarlane used to draw things, not just buy sports memorabilia.

DC’s Vertigo line was one of THE definitive sources for stories that seemed to actually push the boundaries of sequential art and literary fiction, and Warren Ellis was, well- Warren Ellis was still the man. Marvel hadn’t yet learned how to spend money on an actual movie, with actual stars and actual budgets. It was a great time to be in comics. You had the same trappings, you had the same sort of foolishness that you find at modern day cons, but there was just less of it. There were the sights and sounds, but maybe less of the smells, maybe more- youth has a way of sugarcoating everything foul. Try remembering your 21st birthday, remember how awful that was? Of course you don’t, because if you’re past the age of 25, all you remember was that it was fun. You have completely forgotten how bad you felt in the morning. Well, unless you haven’t and in that case, I’m very, very sorry for you.

But my point is that, Wizard World was the place for fans to come into contact with Mega publishers and small outfits alike, and there were rows upon rows of them. As far as the eye could see there were names like Top Cow, Image, Dark Horse, Oni and so many more. You had mega draws, like Kevin Smith and Garth Ennis. The little guys had to pay more, but they did it because they knew that, Wizard World was that special sort of yearly milestone that I wrote about before, like being at Stonehenge on the summer solstice, or some other event in which hairy women and effeminate men like to duct tape sticks to their heads and do their worst impersonations of Gandalf. It was that time and place to try and get out there and you couldn’t miss it, because if you did, you were missing out on something truly awesome.

Now, 11 years on, I went back to Wizard World Chicago. With all the sugar coated memories of yesteryear polluting my early thirties synapses. I was not taking into consideration Moore’s Law, nor was I using any part of my logical brain. I was purely there to do some stuff for Flames Rising, and have a good time. So, on Saturday, when I arrived at the floor of the convention, that magical feeling of nostalgia popping through my icy veins, or maybe it was all the caffeine I had consumed to drive all night to get there, I walked onto that floor and expected it to be that place in time again. That magic moment. The metaphysical and often life altering cross section between fate and self direction, or as I like to call it the fan blades on which the shit of life hits.

[1]But as soon as I looked around, as soon as Matt and I began our trek into the abyss of unshaven and clearly consumer crazed masses I began to get a feeling of very real dread. This is wrong, there’s no representation here. There was Avatar, nearly front and center, and then you pan around and there was…nothing else. What!  I screamed, catching a pallid and under funded interpretation of Rogue off guard, causing her to trip on one of her, what seemed to be, seven inch heals. By the Gods, Matt there’s no representation!, I continued to yell, causing several versions of Heath Ledgers Clown Prince of Crime to recoil from my personal space, obviously more afraid of the real lunacy of legal stimulants and nicotine than they were of the fantastic simulation of anarchy portrayed in the Chris Nolan epic. We continued, Matt having been in attendance the prior two days seemed completely unfazed- though in conversations had over the course of the day I found out that he had a similar story if dismay- and in me, deep down inside grew a sense of defeat. Mouth agape and knuckles dragging, I kept on forward. There were masses of people. The shear number was staggering. Hungry eyed comic enthusiasts searching but somewhat seemingly oblivious to the fates which had befallen this, my seemingly hallowed ground. Happy in their purchasing, but longing for more, you could almost see it. You could almost taste it, though later I found out that what I was tasting was really just the very physical stink which accompanies men in spandex, in which case, I can only guess as to what super heroes would really smell like.

I walked among the people, my people. I walked into the money changers den, here in my temple to the sequential gods, and all I could do was cast glances over my shoulder in anticipation, in wonder and ultimately in resignation. I wanted to go to company booths, I wanted to meet creators and writers and artists and representatives. But there was nothing. Don’t get me wrong, it was refreshing to see so many in artists ally, so many unique and wonderfully creative individuals and teams of near do wells. And Avatar being one of the two publishers in attendance did a good job of being friendly and open to conversations with convention goers. However I was sincerely shocked that there were thousands upon thousands of cash infused comic loving people, passing around the same two company tables every hour or so. It seemed to me that maybe Devils Due Publishing, having just lost Hack/Slash and battling some major bad press for a while now, would have maybe, I don’t know, at least tried to attend, maybe even recoup some of that bad image in issuing some convention swag? Nope, even though they are, literally, down the road from the convention center where the con is held. Or maybe, just maybe the other companies that are littered throughout the Chicago urban sprawl who publish would have thought it a good idea to put themselves in front of people. But I guess the old fashioned sort of actually engaging your audience/paying customer sort of ideas have become an anachronism in this, the future of social media/networking. Or maybe they were just really busy, with trying to save their businesses.

I did have a good time though, I worked over a few booths and spoke with a few people/creators and saw some fun Zombie related stuff, I stayed away from the perils of politics and the Rod Blagojevich area, kept my wrists and spirits intact by directing myself away from the tragically sad D-listers and “professional” wrestling “super stars.” And did not fall into the total shock and awe of William Shatner or Adam West, of which I couldn’t care less about, nor would I have ever, even if I could have, supported the 75 dollar autograph signing fee for the former Captain of the Enterprise. I don’t care how many green chicks he’s bagged over the years, that’s just a crazy fee.

So why did I bring up Moore’s Law in the beginning? Well, that’s simple, really, it is. Wizard World is now, sadly the Tandy computer. We loved it then, we thought it was the coolest thing, those large 5.4 inch floppy’s and the brutalism sort of Stanley Kubrick-esque design of the box. We thought the same of Prodigy and BBS’s, in the beginning of the internet age. I loved Wizard World but, now it seems clunky and old and slow and poorly designed and simply, has been surpassed by the new c2e2, which is the modern day equivalent of a Droid or an I phone. But c2e2 goers and contributors shouldn’t rest on their laurels of good fortune just yet. Moore’s Law isn’t going anywhere, so say sources in the tech world, till at least 2015.

[2] Wizard World and The Hero Initiative partner for 2010 : https://www.flamesrising.com/wizard-world-hero-initiative/