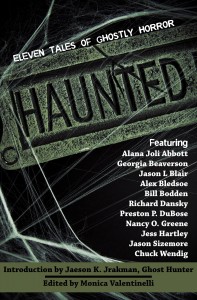 [1]Our gaze into the shadows of Halloween past continues today with the one-year celebration of our first anthology! Not only has Haunted: 11 Tales of Ghostly Horror [2] been well-received by the community, earning a special mention in Ellen Datlow’s Year of Best Horror, but our debut collection also won a Reader’s Choice award. Your can read a round-up of reviews and our award announcement [3] here on the site, by the way.

In honor of our one-year anniversary, we would like to provide you with an excerpt from two of these tales. First, we’d like to share with you the nascent beginnings from Jess Hartley’s story titled “Immaterial Witness.” Then, we’ll share Alex Bledsoe’s unusual take on ghost hunters from his spooky tale titled “What’s the Frequency, Francis?”

We hope you enjoy this flavorful fiction treat — just in time for Halloween! Don’t forget, if you haven’t picked up this collection, you can still do so at BarnesandNoble.com [4] and DriveThruFiction.com [2].

“Thanks for tuning in to Revenant. I’m your host, Jackson Mane, and we’re live on location in Bisbee, Arizona. A town believed by some to be the most haunted in the American Southwest.”

The muscular man seated across from Liz looked like he’d be more comfortable playing college football than sitting in an antique hotel bar. His dark red hair was short but stylish; a bed of messy spikes was interfering with the band of his ultra-modern headset. Jackson flashed a flirtatious smile. The gesture was polished, like he practiced it in a mirror, but that didn’t negate its impact. Suddenly, Liz could see why Revenant was one of the most successful ghost hunting vlogs on the Internet—despite Jackson’s shock jock reputation.

He went on. “Joining us is Liz Bordaine, owner and chief ‘Ghost Host’ for Bisbee Ghost Expeditions, a series of supernaturally-focused tours geared toward local enthusiasts and tourists.”

“Maybe this won’t be so bad, after all,” she thought, reaching up to adjust the tiny pillbox hat she’d chosen for the interview. She’d worn the Victorian outfit—usually reserved for her ghost tours—for two reasons. First, her costume was a good advertisement for her business. But second, and perhaps more importantly, it was her armor against the “bad boys” attitude Jackson and his team were famous for. High collar, long sleeves and floor-length skirt. Even the corset she wore beneath flattened, rather than flattered, her curves. So far, it seemed to be working. Two sentences into the show, and he hadn’t commented on the size of her ass, asked about her sexual preferences or speculated what she’d be like in bed.

Dealing with Revenant—and Jackson Manes—was a necessary evil. Competition for her business was skyrocketing. Paranormal research was becoming more popular all the time; it seemed every Egon-wannabe was setting himself up with some electronic equipment and calling himself a paranormal “professional.”

Some would-be investigators were actually interested in proving the existence of spirits or making contact with the other side—but they were the minority. Most were just looking for a way to break into show business or become an internet personality. For them, the true prize wasn’t to contact the other side: it was having their ghost-hunting podcast or vlog go viral. Hell, if the rumors were true, many of the big names didn’t even believe in ghosts, just syndication.

Liz didn’t have that luxury.

“Hey, what’s this thingamajig?” Shane Savage asked. The device was clearly old; little nicks and chips covered its leather casing. The antenna was a six-inch wire loop hooked to a hinge. The control panel knobs were marked VOLUME, GAIN, FREQUENCY and ETHER DENSITY. An old fashioned disk microphone was hooked to one side, trailing a dry-rotted cord. “Some kind of steampunk tricorder?”

“That?” the museum’s assistant curator said. She scowled at the TV personality. “You really don’t know?”

“Hey, I’m a ghost chaser, not a clerk at Radio Shack. I thought you said everything in this room was related to the supernatural.”

“It is. This is a radio to speak with the dead.”

Savage looked at the machine again. “Does it work?”

“Not with those three bullet holes in it.”

“I mean before it was shot up.”

“If it did, don’t you think you’d have heard about it?”

He ignored her sarcasm.“Okay, you have a point there.”

“Besides, if I know Colby, he shot it because it worked.”

The assistant curator clenched her fists. It was bad enough that the museum had agreed to open its archives to the ridiculous Savage: Ghost Chaser program, but to put its asinine host in her care for the day was an insult to both her position, and to science itself. Other shows had researchers on staff, but Ghost Chaser was entirely Savage’s baby, from its days on public access in Milwaukee to its current incarnation on the Fanta-See Channel. “Sir Francis Colby, the famous Spiritualist from the turn of the last century. This is his collection you’re pawing over. Your e-mail said you’d read all his books, remember?”

This time Savage noticed her tone. “Whoa, don’t get your granny panties twisted, sweetheart. I was just checking.” He reached for the device, but stopped when the assistant curator insisted he don white cotton gloves before touching it.

He lifted the device and looked through the bullet holes. What remained of the interior electronics was a tangled mess of old-fashioned tubes and wires. “So what’s the story on this?”

Sure you’ve read all his books, she thought drily. Your lips would be exhausted after the table of contents. Yet, she was charged with helping the public learn about the museum’s exhibits, even if the public was a balding, tattooed redneck who routinely mispronounced “ectoplasm” as “erectoplasm” on his TV show. She said with all the patience she could muster, “It’s called an ‘Etherometer,’ and like I said, it was used to communicate with the dearly departed.”

Shane stuck one finger in a bullet hole. “Looks like the stop sign by my house when I was a kid. Do you have more information about it? Did he use it to talk to any famous ghosts?”

She chewed her lip; her disdain for Savage clashed with her professionalism. At last she said, “Follow me. And leave that here.”

Haunted: 11 Tales of Ghostly Horror is available now at BarnesandNoble.com [4] and DriveThruFiction.com [2].

[3] round-up of reviews and our award announcement: http://www.flamesrising.com/haunted-reviews-and-an-award/