Shotguns & Sorcery is a mix of high fantasy and hardboiled noir. It’s filled with wizards and freelancers who skulk through dungeons and creep through glowglobe-lit streets. They hang out in speakeasies after raiding zombie-infested tombs. They carry pistols as well as wands, and they’re ready to use them both.

Matt Forbeck stopped by to tell us about about the upcoming 5th Edition OGL version of the RPG, currently funding on Kickstarter [1]!

What were some of your favorite inspirations for the Shotguns & Sorcery setting?

I often describe the setting as a combination of the work of two of my favorite authors: J. R. R. Tolkien and Raymond Chandler. They were the godfathers of high fantasy and hardboiled detectives, respectively. That’s why I call the genre for the setting “fantasy noir.”

How necessary are the Shotguns & Sorcery novels to get into this setting?

While I’d love for everyone to read all the Shotguns & Sorcery stories [2], you don’t need to crack any of them to play in the setting. The 5E Sourcebook includes snippets of fiction to help set the tone and get the players into the right mindset for the game, but that’s all you need to get started. The book stands on its own.

What kinds of adventures can a group get into with this book?

The book centers on adventures inside Dragon City, a massive metropolis built on top of and inside a mountain surrounded by a gigantic horde of zombies. So, it’s urban fantasy with the emphasis on fantasy. The heroes can also venture outside of the city, but that’s the most dangerous kind of work.

What was the biggest design challenge when working on this book?

My son Marty handled most of the actual game design work for this book, with some guidance from me. I’d say the hardest part was coming up with firearms rules that handled the way we wanted them too. The weaponry in Shotguns & Sorcery is a bit more advanced than you’d find in the typical 5E setting, so it took a bit more work. 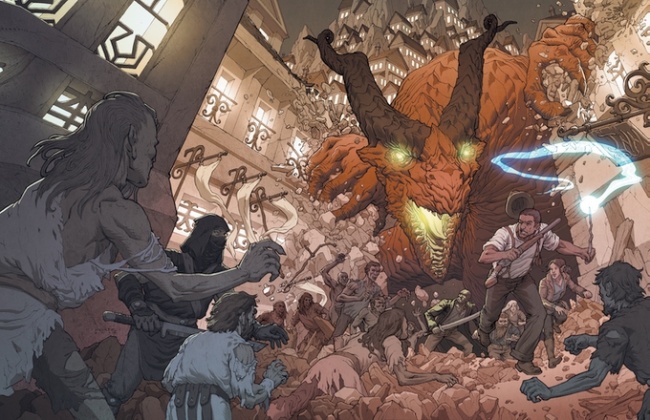 What was the playtesting process like for Shotguns & Sorcery 5E?

We mostly handled it internally. The wonderful thing about working with a system like 5E is that it has such a long legacy of game design behind it and has been played by hundreds of millions of people, so you’re working off a rock-solid platform.

How did the playtest feedback affect your design goals?

We used “getting the game to feel like Shotguns & Sorcery” as our lodestone throughout, and when we thought things weren’t working, we always steered back on course by that. Given that the setting actually started out as a proposal for a line of books for 3E, it wasn’t such a hard move to make.

What piece of Shotguns & Sorcery lore was your favorite to expand or add to this book?

We dug a bit deeper into the investigator and their role in a 5E game, and that was a delight. It brings up all sorts of different ways to play the game that aren’t “knock down the door, kill things, and take their stuff.” I mean, you can do that, but it’s not the focus for the setting.

Solidifying the naming conventions for the setting was a bit of fun too. I did some of that work when building the setting for the stories, but it’s another thing to say, “Hey, in your game, this is what you should try to make it feel as authentic as you like.”

What can you tell us about the creative team on this book?

My son Marty did most of the heavy lifting on this book, design-wise. Turns out he has a flair for it, possibly due to growing up in the tabletop games industry. I’m handling the editing, layout, development, and project management.

Most of the art comes from Shotguns & Sorcery: The Roleplaying Game — the Cypher System [3] edition that came out last year. It was packed with all sorts of stellar stuff, and we didn’t see the need to redo it. Instead, we want to show it off to a new and hopefully bigger audience.

Jeremy Mohler — who published that version of the game through his company, Outland Entertainment [4], supplied a lot of that art himself and served for art director for the book. To top that off, he created a stunning new cover for The 5E Sourcebook, which features the heroes from the stories facing off against a zombie horde. It’s just gorgeous.

Shotguns & Sorcery for 5E is currently funding on Kickstarter.com! It has reached its funding goal and is on to stretch goals. Don’t miss out!

[5] Kickstarter has gone to the dogs with Pugmire : https://www.flamesrising.com/kickstarter-has-gone-to-the-dogs-with-pugmire/