Last week, I was able to sit down with Steve Jackson from Steve Jackson Games [1] and a group of playtesters at ACD Games Day to play a round of the upcoming Munchkin Zombies game.

Having played several flavors of Munchkin, I thought I knew what to expect when we started to play. I couldn’t have been more wrong. You see, I thought this game would be like Munchkin: Cthulhu, where you play humans that have the potential to turn into zombies. Boy, was I off-the-mark! In Munchkin: Zombies you play…a zombie! Immediately, I was struck by how disgusting and wrong the cards were. Class cards cover all the different zombie types from your favorite movies, books and world myths. There are Strong Zombies, Fast Zombies, Plague Zombies — even Atomic Zombies! There’s also also the chance you can pick up different types of zombie Mojo, too, which functions as a special ability.

Our playtest group consisted of people that had played the game before and people who hadn’t. It took about two rounds for everyone to pick up on the game, even with the new “official” rules. Yes, you did hear me right. If you’ve been following along with the Munchkin expansions, you should know that there have been some tweaks that have occurred since the original Munchkin was released. For example, we started with four cards from each deck rather than the original two. I didn’t encounter any other tweaks that I hadn’t already been familiar with, but if you’re confused you can always hop on over to the Munchkin forums [2] and ask your questions there or download the official Munchkin rules [3].

We had a lot of fun reading the cards while we played because the weapons, armor and items were so disgusting and bizarre you couldn’t help but laugh. I had an “Arm” that my zombie used as a club. Another player had a “Toilet” as their armor, and someone else had a “Garbage Can.” Of course, as luck would have it, the gods of Munchkin caused the deck to be shuffled oddly, so we ended up pulling a lot of low-level monsters. As you would expect, there are some zombies in the mix that are just too wrong (stripper, anyone?) or too evil to be left standing. In our game, when we did reach some of the higher-level monsters, a few of them didn’t have a “won’t attack Level 4 or below.” I have to tell you, it was pretty frightening to face the possibility of certain death when you had nothing to defend yourself with — especially when you couldn’t get any help. Fortunately, with the help of some nice bonuses and a Cheat card right out of the gate, I was able to survive until the bitter end in true Munchkin fashion.

For those of you who haven’t played the game before, the goal of each player at the table is to increase their level from 1 all the way up to 10 using a counter. There are two types of cards: door cards and treasure cards. At the start of the game, you receive four of each card. Some treasure cards (Armor, Headgear, Footgear) you’ll be able to put in front of you, signifying what your “zombie” is using in a fight. Other cards give you or the monster a temporary bonus. Basic gameplay is really straightforward. You kick down a door and show that card to everyone at the table. If it’s a monster, you fight. If it’s not, you put the card in your hand and either take another card or play a monster you can beat from your own hand. When you play a monster, you can ask for help from the other players or they can gang up on you. When you beat a monster, you go up a level (or two) and take your treasure. When you don’t, you have to try to Run Away otherwise bad things will happen to your character. Any unusual cards that you may encounter have rules printed right on the card, so if you pay close enough attention you can get the gist really quickly.

I have to say that from what I saw, this particular flavor of Munchkin is definitely my favorite. It’s definitely the most creative and free-form version that I’ve played. Steve Jackson Games has taken what we know about zombies and have made this undead creature their own. Even though zombies are everywhere, I can pretty much guarantee that you have not seen anything like this. 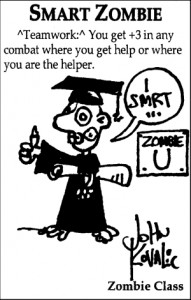 Just how twisted is this particular version of Munchkin? Flames Rising is thrilled to present you with an exclusive look at the very first Munchkin: Zombies card that was given to us courtesy of Steve Jackson Games for your viewing pleasure. What you see here is a Smart Zombie. You can also check out the draft sketches [4] that artist John Kovalic posted on Twitter to catch more previews of their brainstorming session.

I’d also like to mention that Steve Jackon Games were also giving out green Munchkin: Zombie coins at their booth at ACD Games Day. I’m guessing we’ll probably see some Munchkin coins [5] posted on their website at some point.

There’s also this really cool Munchkin: Bookmark of Braaaaaaaaaaains [6] that you’ll be able to use along with your Zombie Dice, too, in your existing game.

If you like black humor and if you don’t mind being grossed out for a ton of laughs, then I think you’ll have a blast playing Munchkin: Zombies. But hey, if you don’t want your zombie wielding a shotgun and casting some of that zombie voodoo mojo…can I have your spot?