Matt Forbeck tells us about Amortals

Matt Forbeck has been a staple in the RPG industry for many years. With stints working for Games Workshop, Pinnacle Entertainment and Human Head Studios, and with design credits from Deadlands [1] and Brave New World [2] to Mutant Chronicles and the Leverage [3] tabletop role-playing game, Matt has enough experience that the title “veteran” hardly seems adequate. Matt and I sat down to hash out a few questions regarding his most recent novel, Amortals, from Angry Robot Books.

What inspired you to write a dystopian, futuristic novel? 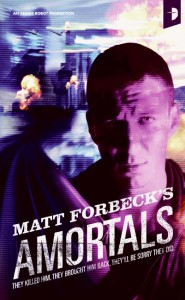 [4]The idea that I had for the novel required a dark future. I wanted to set up a mystery in which the hero had to solve his own murder given only a recording of his demise, a snuff film that had been released for anyone to see. To pull that off, I either needed to go with some spectacular magic or technology, and I chose to plunge into the future.

Besides that, I’ve always been a fan of dark, near-future science fiction — call it cyberpunk if you like, although it’s broader than that these days — but had never till that point had a chance to try my hand at writing a full sci-fi novel. The closest I’d come was the novelization of the Mutant Chronicles film, but that’s more “techno-fantasy,” as we called it. Many years before that, I’d written The Big Dance, a novel for Reaper’s CAV game, which pitted giant robots against each other. While that’s clearly science fiction, it’s about giant robots battling it out, which makes for an entirely different tone.

Fortunately, I got to scratch that itch. While I’d written 13 novels before Amortals, it was the first one I’d written that wasn’t a tie-in to a game or a film. I’m grateful that Angry Robot bought the novel from me on the basis of a painfully short pitch and set me free to write it.

Do you think calling Amortals “dystopian” is fair?

Not technically. It’s a dark future, but it has its better points too. It’s more like Blade Runner [5] than 1984 [6]. There’s no all-pervasive government that oversees and controls every aspect of its citizen’s lives. It’s intrusive, sure, but in the same sense that our current government can be intrusive when it likes.

In fact, in many ways, the future of Amortals is no darker than the world we live in now. The metaphor of the future gives us the distance we need to be able to examine issues from a cooler perspective, but it doesn’t mean that the issues have changed much if at all over the years.

What qualities – both positive and negative – do you like to write into your characters?

I like to run the gamut and play with all sorts of characters. Most of them are fairly sensible sorts, if only because it’s easier to believe in a character that’s not a complete loon. I try to give even my so-called bad guys reasonable motivations. If you study them long enough, you might find yourself starting to agree with them. That doesn’t make them right, of course, just possessed of a powerful point of view that contradicts that of the protagonist.

I’ve noticed that I like to write about heroes though, people who are willing to stand up and do what they think is right, no matter how hard it is. They might be weary or reluctant or just plain pissed off at the world, but they never turn their back on it.

You’ve done a lot of writing for RPGs; how is writing a stand-alone novel different? Is it easier or harder (or about the same) than writing an RPG book?

It’s a whole different animal and uses different parts of the brain. With an RPG, you build an entire world and populate it with all sorts of reasons and opportunities for adventure. With a novel, you pick one story and follow it all the way through. It’s limiting in that way, but it also means you as the author have absolute control over the story, which frees you up at the same time.

In an RPG, the players control the story at least as much as the game’s designer. You cannot predict what they’re going to do, and the more you try the more frustrated you’re likely to become. With a novel, though, you get to handle it all. The responsibilities and rewards for each type of work have miles between them.

Do you intend to write a sequel to Amortals?

I’d love to. The novel comes to an abrupt end at what is the climactic part of Ronan’s story, but it also supplies a clear impetus for what could be at least a whole new novel’s worth of tales. I’m actually going to be suggesting this to Angry Robot soon, along with a raft of other ideas I’m pursuing.

I understand you have another new novel on the near horizon, Vegas Knights. Can you give us a thumbnail sketch of the premise?

[7]A couple of college freshman pick up a little bit of magic and decide to head to Las Vegas over Spring Break to see if they can use their tricks to score big. Unfortunately for them, they discover that they’re far from the first people to come up with this idea. The magic mob catches on to them, and it all spirals out of control from there in spectacular and painful ways.

That’s the key phrase for a thriller, by the way: “spirals out of control from there.” If it’s a comedy instead, you use “hilarity ensues.”

Is Angry Robot publishing this novel as well? Are you slated to write more novels for AR?

This is another Angry Robot book, just like Amortals. They’re great people, and I’ve been thrilled with them so far. I don’t have any other novels under contract with them at the moment, but we’re in the middle of discussing plans for the future right now. I have high hopes that you’ll see many more of my books from them in the future.

I know publishers have cut way back on this sort of promotion, but is there a thought that you might do a book signing tour?

As an indie publisher, Angry Robot doesn’t send any of its authors on tour, and honestly I’m not sure how much good such things do these days for any but the bestselling authors. That said, I always enjoy meeting with people who enjoy my work. I’m going to be at a number of conventions this spring and a few more over the summer and fall. For updates on that, people should check my schedule on my website.

If book or game stores would like to have you in for a signing, how can they get in touch with you?

[8] Matt Forbeck: Monster Academy and His “12-For-12” Campaign : https://www.flamesrising.com/matt-forbeck-monster-academy/