Preview of Amortals by Matt Forbeck

It’s Lee Child vs. Altered Carbon in a high-tech blast of tough-as-nails future thrills. Matt Forbeck arrives as the new king of high-concept – with a blockbuster action movie in a book. In the near future, scientists solve the problem of mortality by learning how to backup and restore a persons memories into a vat-bred clone. When Secret Service agent Ronan “Methusaleh” Dooley is brutally murdered, he’s brought back from the dead yet again to hunt his killer, and in doing so uncover a terrible conspiracy.

Flames Rising is pleased to present a excerpt from this new novel by Matt Forbeck. 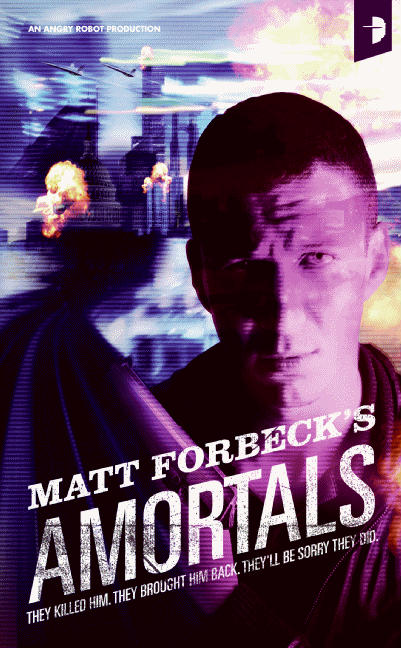 [1]Getting killed always gives me the worst hangover. When I was younger, I thought maybe it had something to do with my soul being forced out of my body and then shoved into the next. Even if I couldn’t remember it, that sort of trauma had to leave some sort of mark on a person’s spirit, right?

“You ready for this, Agent Dooley?”

I rubbed my baby-smooth chin and leaned forward in the chair, flexing my fresh legs. The techs at the Amortals Project had shaved my face micro-clean, which I never liked, but it would grow out fast enough.

“This isn’t the first time I’ve seen myself die, Patrón.”

The frat-boy-faced man with the slicked-back hair cracked a shadow of his wide smile. His perfect teeth gleamed in the room’s dimmed lights. “Right. I saw the documentary about your first time when I was in grade school.”

“The 2132 version is the best,” I said, battling a sickening sense of déjà vu. Hadn’t we had this conversation the last time? “They went all out for the centennial.”

Patrón snorted. I knew he could look right through my bravado. I didn’t want to watch this. No sane man would.

“That’s Director Patrón, by the way,” he said. “‘Sir’ is fine too. You sure your memory’s working right?”

Hoping he’d attribute my failure to feign respect for him to revivification sickness, I ignored him.

Patrón blinked. I’d known him nearly as long as I’d known anyone alive. He had a strong stomach. “It’s bad, Ronan,” he finally said.

Patrón shrugged, then waved his hand, and the thrideo leaped to life. The polarizers in my lens implants kicked in, transforming the blurred images into a 3D mirage that looked sharp enough to cut my pupils.

In the third, a man sat bound to a white plastic chair in the center of a small, gray room made of cinderblock walls. He was tall and trim and dressed in a navy blue suit, a red tie, and a white shirt splashed with crimson. His ankles were cuffed to the legs of the chair with self-constricting ties, and his hands were bound behind him, likely with the same.

The man had close-cropped, dark-brown hair and a three-day shadow of a beard. He looked young, maybe about thirty, although it was impossible to tell these days. He wore a black blindfold over his eyes, the kind the first-class stewards hand you for overnight flights. Blood trickled down in twin paths from beneath the fabric, framing the rest of his face.

Despite the blindfold, I knew that face well. It was mine, and I did not look good.

Another figure stepped into view. This new man wore the kind of clean suit you see in microchip laboratories, complete with the full headgear and the mirrored faceplate, except it was all black. Loose and bulky, it covered him from head to toe like a high-tech burka.

The new man carried a 9mm semi-automatic Nuzi pistol in his right hand. The safety was already off. He tapped it against his leg before he began to talk.

“I suppose,” the new man said in a voice that had been digitally garbled, “that you’re wondering what you’re doing here today, Mr Methuselah Dooley.” I winced at the nickname. The press had slapped that on me over a hundred years ago, and I’d never been able to shake it.

The previous version of me – the one about to die in the thrideo – grunted but did not say a word.

A trickle of blood escaped from his mouth as he tried to speak. The tongue in my mouth recoiled at the ghost of a traumatic memory I didn’t actually have.

Patrón glanced at me, but I ignored him. The man in the suit knew exactly what he was doing. We just had to watch to find out what that was.

I knew I could stop the recording to chat with Patrón if I wanted to. I could rewind it, even watch it dozens of times today. My first time through, though, I wanted to absorb every bit of it without interruption, to see it as it happened.

Something inside of me wanted to turn away, to avoid this horrible spectacle. I ignored that impulse.

I stared at the man in the chair as his struggles abated. The bracelets had cut right through his socks, and blood trickled into his shoes. Unable to get free, he gave up the fight and began to weep.

Patrón squirmed a bit in his chair. “That sort of behavior unusual for you, Dooley?”

I ignored the crack. If the man in the chair had wept, it might mean he was trying to tell me something. I’d seen myself die times before, several times, and I’d never done anything of the sort.

The man in black shifted his gun to his left hand, then reached out and slapped the man in the chair with a gloved palm. “Get a hold of yourself, Meth,” he said. “You’ll disappoint your fans.”

The man in the chair – I couldn’t bring myself to call him Ronan or Dooley or even Methuselah – whimpered at this, but the tears ended, and he did not grunt another word. I felt my fists clench. I wanted to jump up and take out the man in black – tear the life from him with my bare hands – then rescue the doomed man. It was too late though. Real as the images seemed, I was watching the past. This had already happened.

“This is what the Secret Service does for you, eh, Meth?” the man in black said. “Give them your life, and they only ask if they can have another.”

The man in the chair let his head loll back on his shoulders. I wasn’t sure he was still alive.

The man in black leaned forward and whispered something into the other man’s ear. The audio leaped up to compensate for the difference in volume. I could hear it through the bone conductors tapped into the base of my skull.

The man in the chair flinched at these words, spoken as softly as a promise to a sleeping lover.

The man in black straightened back up again. “You sicken me,” he said. “You’re like a dog. All those years serving your country and your President. How much did that cost you? Your wife. Your kid. Your grandchildren. Every last one of your lives.”

The man in the chair slumped over in the chair, his shoulders slumped, his head hanging low. He’d been beaten in every way.

“You’re not even a man,” the man in the clean suit said. “You’re just a distant echo of the original.

A cheap, vat-grown copy. You fade more every time you bounce back into this world. I’d say you’d be nothing soon, but you’re already there. Every breath you take subtracts from those the original Ronan Dooley breathed a hundred and fifty years ago.”

The man in the black suit leaned in and brushed the other man’s sweat-soaked hair back with the barrel of his gun. The gesture would have seemed tender with just about any other instrument.

“You think just because you’re amortal you’re special. That you can’t really die. That it doesn’t really matter if you do. It’s a great set-up, at least for people like you. One body dies, just go to the whole brain backup and restore it into a clone. You don’t even have to remember the pain of death or the fear it brings. You’re like an alcoholic who blacks out before beating his wife. In your head, it’s like it never happened.”

The man in black knelt down in front of the chair. He swapped his pistol back to his right hand and pressed the tip of his gun against the other man’s forehead, then pushed the bleeding man’s head up and back until it was level with his own.

“What you forget,” the man with the gun said. “What people like you always forget is that a copy is not the original. It may look, sound, smell, taste, feel, and even act like the original, but that doesn’t mean it’s the same thing. It’s a substitute, a replacement, a simulacrum, a doppelganger.”

I swore I could hear the man sneer as he continued. “People are not digital files recorded in a meat medium. We are flesh and blood, and we are unique. You may be a perfect copy, but you’re still a copy. Somewhere, the fleshless bones of the original Ronan Dooley are spinning in his rotted grave.”

The head of the man in the chair pulled back from the pistol for a moment, then lolled to the side.

The man with the gun reached out and grabbed the other man by the shoulder and sat him upright again.

“You’re not a man,” the man in black said. “You’re a ghost made flesh, condemned to haunt this world until the day your number comes up again. Even amortals can only cheat death for so long.”

[1]The man in black stood now and placed the tip of the barrel of his gun against the other man’s forehead.

This preview was provided for and posted with express permission from Matt Forbeck and Angry Robot.