The LaSala Bros: Foreshadows: The Ghosts of Zero [1] is, in woefully brief terms, an anthology of dark science fiction combined with a soundtrack album. Not only is it the most ambitious project we’ve ever orchestrated, it’s also the most unique. From the first few steps, we were doing things differently. It didn’t even come about in the usual way, which is: “Hey, let’s make an anthology with the theme of [insert theme here]. Now let’s hold an open call to get some authors.” Here’s how it actually went down… 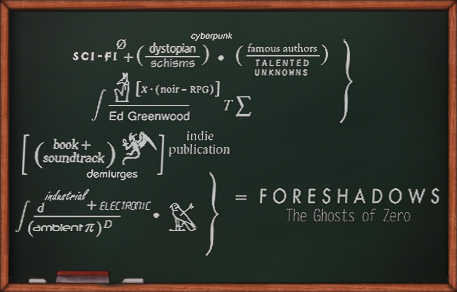 John LaSala: Back in April of 2008, my brother Jeff conveyed to me a message from the omnipresent Ed Healy, asking if I would be interested in composing an official soundtrack for a cyberpunk RPG setting. Little could he—or any of us—know what a long and flexuous journey that notion would undergo.

Rather than tackle this job myself, I unleashed it upon this loose aggregate of musicians we call the Very Us Artists [2]. From them, I put together an elite team of willing souls to conjure and create music that could feasibly serve as a soundtrack to this cyberpunk RPG setting, with the eventual aim of tossing it all in a blender and spreading it out into a disparate-yet-cohesive patchwork of songs, sounds, and scores. This is essentially the philosophy behind everything VUA does. But right when all this wonderful music was really coming together and it was about time to mould it into shape for RPG purposes, there was a . . . a glitch in the Matrix, if you will. The foundation upon which our creation was built appeared to be cracking. The RPG was in shambles, its creative team floundering. We were looking at a soundtrack to nothing.

[3]Jeff LaSala: This soundtrack-with-no-partner struck a chord with me, because it offered me a chance to do something I’d always wanted to try: pair up writing and music in a way that hadn’t really been done before. Ever since I got into game design and novel writing (which started for me with my Eberron novel The Darkwood Mask [4]), I’d made a lot of writer-type friends, and I loved the concept of pulling together all these creative people for something original. In essence, my brother knew a bunch of musicians—they’d already made the music!—while I knew a bunch of writers. So the idea just sort of became a no-brainer: Why not make the album the basis for an anthology of short stories? Each track would be the soundtrack for a story, and taken as a whole, the album is the soundtrack to the whole cyberpunkish setting we conceived. 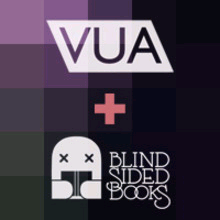 [5]The LaSala Bros: So that’s what we did. Since ours was an experimental project with an indie foundation, we needed to hand pick people to be involved; this wasn’t really an open or closed call sort of thing. We approached a number of writers Jeff knew from his work with Wizards of the Coast, along with a few close friends. With help from freelancer Jeremy LC Jones, we even roped in Forgotten Realms creator Ed Greenwood and Western and PI writer Robert J. Randisi—both legends in their respective arenas and a real delight to work with. Then we assembled ourselves into a Voltron-like team of project leaders to manage the ongoing logistics of our ambitious endeavor. And this began with the promotion of contributing musician Bilian to album co-producer and was fortified with the addition of renaissance man Joshua Wentz and his fearless publishing imprint, Blindsided Books. We’re no Macmillan or Wizards or Tor. We’re just two little companies with oversized ideas.

John: Yes, I did. Forthwith, we got to the emprising task of playing media matchmaker, pairing authors and music tracks, forging relationships that would have otherwise never come about. And it was a process that was pretty revelatory, about both the ears of our authors and the storytelling possibilities in the music. It’s a part of album- and anthology-making that has got to be pretty rare. It sure felt like breaking new ground; we were pretty much making up the rules as we went along. And that may be my favorite part about hatching hare-brained schemes like this.

Jeff: When Foreshadows: The Ghosts of Zero [1] is released, people will hold in their hands a thick paperback book with a CD nestled inside. The cover art will be the work of Michael Komarck, an artist whose work blew me away from the moment we first crossed paths [6]. Inside, you’ll find 19 stories, corresponding to the 19 tracks of music. Each story will also include an illustration by Talon Dunning, an artist whose style I’ve enjoyed since seeing his work in White Wolf’s Ravenloft RPG [7] books.

John: As for the content of our creation . . . well, the first solid sample of this union of music, story, and illustration is this downloadable excerpt of “Too Much Is Never Enough” [8] (just click the button on the second page to hear the music). Note that all three components share the same title. They are one. The music was composed by Bilian [9], the story written by Don Bassingthwaite, and the art drawn by Talon Dunning. They’re the trinity behind that story/song/drawing. But three is the minimum you’ll find in Foreshadows. The album tracks have as many as four musicians behind each one, and some of the stories have been co-authored as well. It’s a wonderfully twisted spaghetti monster of cyberfiction, rendered in sights, tales, and sounds.

The part where you come in.

Jeff: You know how when sidewalk cement is freshly poured, they put out traffic cones or caution tape to keep people from stepping—or writing their initials—in it? That’s sort of the state that Foreshadows is in right now, except that we’re deliberately tossing aside the traffic cones and inviting people to come muck around and stick their hands in it before it dries.

[10]The LaSala Bros: Forging Foreshadows [10], which only runs through November 2nd, is our Kickstarter campaign. Through Kickstarter, we’re raising funds to elevate the production of The Ghosts of Zero to the level it deserves. With enough donations we’ll be able to professionally master the soundtrack, broaden our distribution, and generally increase the product quality, including a run of 100 Limited Edition copies, all signed by the various authors and musicians. In turn, backers can get some super cool stuff, including….
• having their name used in a story [11],
• corresponding with one of the authors to write a short prequel (care to brainstorm with Ed Greenwood or Keith Baker [12]?),
• or scoring themselves signed copies of all six books of Don Bassingthwaite’s Eberron [13] trilogies.

For crying out loud, you can even get a tailor-made Foreshadowsy cyberpunk outfit [14]. It’s true!

Foreshadows is a project in process, the work of many contributors assembling an exquisite, cybernetic corpse. All it needs now is a bit of silvered stitching. So, come help Kickstart [10] this thing!

Stay tuned for the next exciting installment of The Foreshadows Equation [15]. Find out what kind of crazy, mixed-up world comes about when you scramble the minds of 18 authors and 12 musicians and strain it through a futuristic sieve!

[1] Foreshadows: The Ghosts of Zero: http://foreshadows.net

[8] downloadable excerpt of “Too Much Is Never Enough”: http://foreshadows.net/pdfs/foreshadows_tmine_excerpt.pdf

[11] name used in a story: http://foreshadows.net/ks/#immortal

[15] next exciting installment of The Foreshadows Equation: http://www.flamesrising.com/the-foreshadows-equation-part-2/