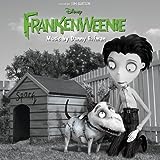 What’s black and white and has Tim Burton written all over it? While I’m sure no other movie reviewer has dropped that line, what I am positive about is that Frankenweenie [2] is a new Halloween favorite created by spooky director/writer/producer/artist Tim Burton [3].

Frankenweenie [2] is based on a short film Tim Burton produced in 1984. The film, which is readily available online and as an extra on some versions of The Nightmare Before Christmas [4], is part of the Disney catalog. You can watch the original Frankenweenie on Slate.com [5]. A family film, Frankenweenie has a full cast of characters who live (and lurk) in the town of New Holland.

For those of you who’ve seen the short film, you’ll be happy to know that the full-length movie fleshes out the same theme and aura of that shorter story, while keeping the integrity of the original. Yes, the entire stop motion film is in black-and-white, a feat that is to be accommodated in an age where the art form is largely ignored in favor of special effects and technology. The use of puppets here is different than in other Burton movies, and each one is a subtle nod to a figure from horror movie history. I was enthralled by Mr. Rzykruski (*coughs* Vincent Price) and his social commentary while simultaneously laughing at the ominous Mr. Whiskers.

The artistic direction, voice acting, and contemporary riff off a Leave It To Beaver culture was flawless. It’s a visually stunning movie with mostly strong characterization brought to life by actors like Martin Short and Catherine O’Hara. (Incidentally, if you think O’Hara’s voices sound familiar, they should! She stitched her vocal talents to the role of Sally for The Nightmare Before Christmas. Oh, and yes. That was a bad analogy.) Though, there were a few points I had hoped members of the secondary cast were a little more balanced plot-wise. Given the nature of the film and its setting, though, I can’t really see a good way to break that dichotomy without significantly altering it. So call that last bit wishful thinking on my part moreso than a criticism. This is, after all, primarily a kids’ movie. I would even go so far as to say that the average age for this could fare younger than Burton’s other films, which is something to keep in mind if you’re going to see this.

Speaking of plot, the story primarily focuses on Victor (Frankenstein) and the love for his dog, Sparky. To say anymore would be to spoil the film for you, if only because you’ve likely already guessed by now Sparky isn’t just playing dead, and Victor Frankenstein lives up to his namesake. It’s the side effects of what happens next, including a few scenes that tilt an honorable head toward the original story of Frankenstein, that truly makes Frankenweenie a new, if not bittersweet, Halloween tradition.

[4] The Nightmare Before Christmas: http://disneymoviesonline.go.com/movies/the-nightmare-before-christmas-750000000560/