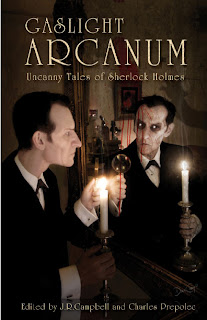 I have been a Sherlock Holmes fan for as long as I have been able to read. I have over a dozen books devoted to the Great Detective, and I have spent more than a year working on a series of essays examining the original stories written by Sir Arthur Conan Doyle. So it’s no surprise that Flames Rising asked me if I wanted to review a (nearly) all-new anthology of “uncanny tales” featuring Sherlock Holmes. It’s even less of a surprise that I accepted.

In my collection of books, I own a couple of anthologies that take different directions for Sherlock Holmes – one of science-fiction stories, and one combining Sherlock Holmes and the Cthulhu Mythos – so in reading this, I tried to put aside my “slavish fanboy” hat and read them with an eye towards different takes on the Great Detective. In such anthologies, I personally look for two elements: fidelity to the core of the characters and elements of the Holmes canon, and novelty to present a new take or slant on familiar faces. How does this new anthology hold up?

“The Comfort of the Seine” by Stephen Volk is set earlier in Holmes’ life, when he was still a young man going to university. It’s written in first-person from the perspective of Holmes on his death-bed writing a letter to Inspector Lestrade, and talks about Holmes falling in love with a Parisian flower-girl, who then dies mysteriously. The story takes a few twists and turns (which I won’t spoil), and a couple of times it stretched credulity, but overall I found it to be a dark but entertaining story, giving some power and tragedy to Holmes’ choice of vocation.

“The Adventure of Lucifer’s Footprints” by Christopher Fowler is in the classic Holmes formula, a first-person account told by Watson about a case in 1888. It follows along the lines of stories like “The Adventure of the Sussex Vampire” in which Holmes is presented with a supernatural situation and attempts to disprove it. The story ends up a bit uneven (it’s not clear whether Holmes is actually accepting the supernatural conclusions he’s coming to or not), but overall it’s not bad.

“The Deadly Sin of Sherlock Holmes” by Tom English is told in the third person, with a few glimpses into the situations or other characters impacted by the story. This tells of an evil book of sins penned in the 1400s by an ancestor of Moriarty. Although Holmes comes to embrace the supernatural option in this story, it feels plausible. The tale overall is very dark and contains quite a bit of conflict around the nature of faith and sin – not a traditional Holmes story, but very good despite that.

“The Color that Came to Chiswick” by William Miekle leaves me conflicted. It has slightly irritating “steampunk”-ish levels of technology (in this case, medical technology, such as germ theory and modern approaches to dealing with it) and is clearly a Cthulhu mythos crossover. As such, I found it to be on par with some of the stories I’ve read in anthologies such as those in “Shadows Over Baker Street” – slightly unsatisfying both to fans of Lovecraft and Doyle. It’s an adequate story for all that, but it doesn’t stand out much.

“From the Tree of Time” by Fred Saberhagen is the only story that isn’t written specifically for this anthology. It is, of all things, a Dracula/Holmes collaboration case, with Dracula narrating the story to an unnamed first-person narrator in the late twentieth century. Surprisingly fun, and appropriately short – the story devotes only the words needed to convey the story and no more, keeping it tight and enjoyable before the novelty wears off.

“The Executioner” by Lawrence C. Connolly details how Holmes might have survived Reichenbach Falls, by being brought back to life. It’s a first-person story from the perspective of Holmes, and the story contains a healthy blending of the fiction of Mary Shelley. It’s one of the more unusual stories (it’s hard to explain without spoiling the core surprise of the story), but it’s full of Gothic flavor.

“A Country Death” by Simon Kurt Unsworth is a story set around the time of Holmes’ retirement, told from the third-perspective. The story has an unnecessary twist early on around the identity of the detective (it gives the impression that Holmes is the detective, but it’s the death of Holmes that is the object of the story). The only real touches to the Holmes canon are the fact that Holmes is the victim and it is centered around his bee-keeping during his retirement, but otherwise it ends up being a good horror story with some mystery trappings, instead of a mystery story with some horrific elements.

“Sherlock Holmes and the Great Game” by Kevin Cockle is an irritating story about how all of Holmes’ detective work is actually the result of a magic knife, and that all of Watson’s accounts are lies to cover up the fact that Holmes just points a knife at the problem and manages to solve it. The core of the character, in my mind, is completely shattered by this premise, and it was hard for me to enjoy the story at all as a result.

“Sherlock Holmes and the Diving Bell” by Simon Clark confused me. In the investigation for a supposedly immortal man trapped in an old diving bell for five years, Holmes deduces the existence of psychic powers while discounting the concept of immortality. There’s also a reference to saving a young girl that doesn’t seem to have anything to do with anything else. It’s in the classic “first-person Watson” format, but I just couldn’t wrap my head around what this story was trying to accomplish – it felt like half of the story was missing.

“The Greatest Mystery” by Paul Kane is another first-person Watson story in which Holmes fights Death itself. Like “The Great Game,” I found the premise flimsy (although the story at least takes a while to unveil it), and there’s a nice reference to a canonical story, but otherwise I just couldn’t get into this one.

“The House of Blood” by Tony Richards takes the moniker of “the immortal detective” literally in this third-person story. Holmes realizes after his death at Reichenbach that he cannot die nor does he age, and over time he finds himself in modern-day Vegas. Although the previous few stories had similarly unusual premises, this one charmed me because I felt the essence of the character was preserved. The ending was a bit awkward, but how Holmes comes to slowly accept the supernatural (even though he himself is evidence of the existence of the supernatural) feels right. I would read an entire novel of modern-day Holmes from Tony Richards.

Finally, “The Adventure of the Six Maledictions” by Kim Newman is by far the gem of the book. This story takes up nearly a quarter of the whole anthology, but it is worth every page. Surprisingly, this story doesn’t even have a whiff of Holmes and Watson in it – instead, the main characters are colonel Moran and Professor Moriarty! Like Kim’s well-known novel “Anno Dracula,” he mixes a number of great references to other stories together into one rich mythology: explicit references to books like Jewel of the Seven Stars and The Maltese Falcon, as well as passing notes to the A. J. Raffles and Arsene Lupin stories. Moran as a narrator is vulgar, racist, arrogant, and wonderfully entertaining while doing it. While I would read a novel of Tony Richards’ Holmes, I would read an entire series of Kim Newman’s Moran.

Conclusion: Every anthology ends up having a few stories that don’t appeal, and this one is much the same. But most of the stories are good for a variety of reasons, and the last two stories are absolutely worth the price of admission. If you are a fan of Sherlock Holmes and novel approaches to well-loved characters, this anthology is well worth a look.