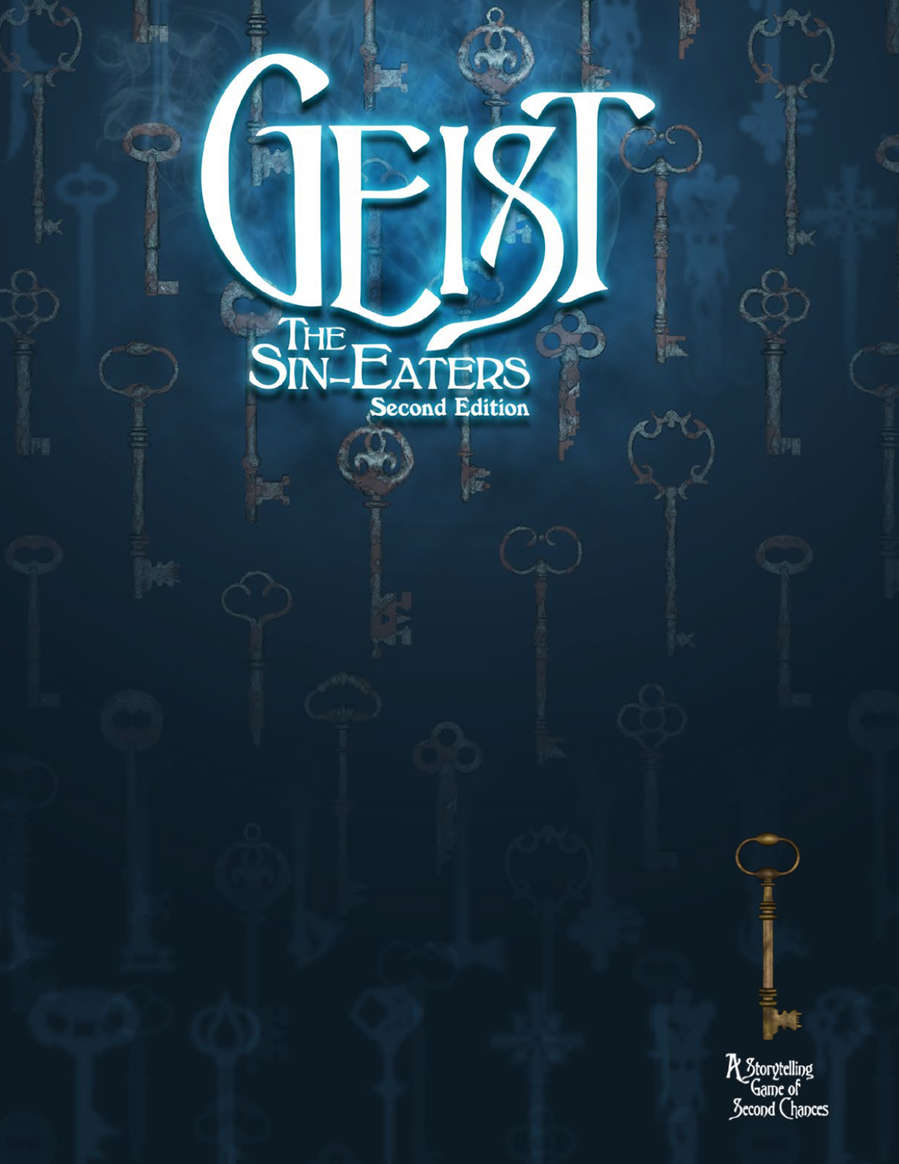 [1]After successfully fulfilling the Kickstarter and shipping books to distributors, Onyx Path Publishing has released Geist: The Sin-Eaters Second Edition [1] in digital and hardcover formats.

Death is not the end.

You learned that firsthand when you died, and in the darkness you made a deal that brought you back — but not alone. Now, bound inextricably to a geist — a shade, a monster, a tragic, broken soul — you stand between the world of the living and the world of the dead. You stand between the dead and the hungry dark that would devour them. You give a voice to the voiceless and tear down cosmic systems of oppression. You will make a better world, and if you die trying… well, you came back once, and you can do it again.

In Geist: The Sin-Eaters, you play a person who died with a powerful burden on their soul — something they didn’t accomplish in life, or something they never found. On the other side of the veil, they made a bargain with a powerful being called a geist, which returned them to the world of the living and to their own body, at the cost of a permanent bond between them and the geist. Now your character stands as a medium, with one foot in the world of the living and one in the world of the dead. Will you bend your efforts toward the cosmic injustice of the Underworld, that consumes all who become trapped in its inky depths? Will you turn your wrath on the necromancers, the ghost-eaters, the two-bit frauds who exploit dead and living alike for their own enrichment? Will you reach out to the strange shade bound to you, to try to find the person beneath the inchoate fury and bring them peace? Will you bring a new faith to the masses and teach the living to welcome the dead into their lives? Or will you use all your newfound supernatural might to accomplish what you could not in life?

Originally released in 2009, Geist: The Sin-Eaters was a sleeper hit for the Chronicles of Darkness, finally bringing “life” to the realm of ghosts and death. And now this game of second chances gets a second edition, with Geist: The Sin-Eaters 2nd Edition, offering a revised and updated rules system and an expanded setting.

– The complete rules for playing a Sin-Eater in the Chronicles of Darkness, including systems for organizing and directing the efforts of large-scale organizations like Sin-Eater cults or organized-crime families.
– Burdens, krewe Archetypes, and a host of unique powers to create your Sin-Eaters and the strange death-cults they build.
– Example settings from across the globe and history, from the tumult of Washington, D.C. in the 1960s to medieval Carcassone to present-day Beijing.
– A detailed look at the Underworld and its denizens, from the terrifying Kerberoi to the never-born Chthonians.

Geist: The Sin-Eaters Second Edition is now available in PDF and Print on Demand at StorytellersVault.com [1], as well a traditionally printed Hardcover at IndiePressRevolution.com [2] and Studio2Publishing.com [3]. Your local game store can also order direct from Indie Press Revolution or their preferred distributor.

[6] The Secret of Crickley Hall : https://www.flamesrising.com/the-secret-of-crickley-hall/