Zombie Week continues here at Flames Rising with a new essay from Nick Tapalansky, creator of the Awakening series published by Archaia Entertainment. In this essay Nick tells us about his love of the zombie genre, his frustration with the zombie fad and the challenges of writing a comic series in a genre he admits is already packed.

Genesis of the Living Dead

[1]I like zombies. I also like being understated. Those two statements may be related. Take a journey with me.

It’s early in 2004 and the genre is experiencing something of a renaissance. 28 Days Later had landed over the summer of ’03 and set a brand new ball rolling. The Walking Dead was hitting its stride as a comic (don’t forget kids, it was a funny book long before it was a TV series), and the Dawn of the Dead remake shambled, ran, and lunged at our collective throats. Shaun of the Dead was coming, ready to take us to the Winchester until the whole thing blew over.

All of these have something in common: they take the genre someplace new. 28 Days Later introduced us to the rage virus, an infection which, while zombie-like (in the Romero sense), was much more ferocious. The Walking Dead was giving every genre fan his wildest dream each month with the zombie movie that never ended. Dawn of the Dead took Romero’s classic and updated it, introducing a new generation to an even creepier mall while retaining the same sensibilities that make the Dead series indispensable. Shaun of the Dead… Well, if you need me to tell you about it then this article probably isn’t for you.

So you have all these great pieces of fiction flying around, advancing the genre and elevating zombies to a decaying throne of half-eaten brains at the top of the pop culture food chain. And then?

Everybody wants to cash in, publishers and studios are churning out the rotten corpses by the truckload, Hot Topic has stickers (although who am I kidding, those guys throw in their fake vampire teeth and suck the life out of anything fun), and, worst of all, so much of it is the same. I’m not saying it was all bad, but that renaissance we were talking about? It gave way to mass production and dwindling innovation in a hurry. As a fan, that really pissed me off.

So I decided to do something about it.

[2]To that last point, let me be clear: I like the standards. I like them a lot, actually. But if I want to watch a classic, I’ll watch it. If you want my hard earned cash, whether it’s $3.99 an issue, $10 per ticket, or $20 per book, you better give me something I don’t already own.

Deciding to write your own comic isn’t something you undertake lightly, especially when your impetus is to come out with a different take on something that, pardon the pun, is being done to death. You’re coming into things at a double disadvantage: you’re learning a new craft and you’re fighting against a deluge.

The former is actually, in some ways, a positive. You haven’t developed any bad habits yet. Downside is that you’re learning as you go. In hindsight there’s a lot I would change about the first few issues of Awakening, but that’s neither here nor there. It’s that latter part, the deluge and the fight against it, that I want to talk about here.

Dissecting a genre isn’t easy. Blending it with a second, equally nuanced genre with which you’re mostly unfamiliar doesn’t make it any easier. Finding the staples, deciding why they’re there, experimenting with tweaking them – it’s a lot of trial and error.

I knew early on that the background conflict I wanted to explore was a science vs. religion motif. I’m no expert on the genre, I’m a fan but I’ll be the first to admit that hardcore doesn’t belong before that designation, but it wasn’t something I had seen done in a meaningful way. If that was what I wanted to explore, and it was, that meant taking the genre staples and playing with them in a way which presented them uniquely and, at the same time, would support my then-gestating cast in their exploration of this world.

Taking key elements of a genre and tweaking them is a scary process. You don’t want to eliminate the touchstones but, at the same time, these things had to go. More accurately, they had to be modified. Deformed. Mutated.

So what elements make a zombie story recognizable? Let’s see…

All of these feed on one another (har!) in a symbiotic way, with zombies being created by an easily transmitted ailment/trigger, and numbers growing exponentially.

So what would happen if we slowed things down? Maybe there isn’t an easily identifiable cause – one minute you’re walking down the street and the next you’re on the ground, dead. A minute later you get up again…

Maybe it happens slowly at first, just shows up in reports as a missing person here, an assault or murder there. People don’t immediately respond to the headlines because, hey, how is it any different from every other day, right? Shitty things happen to people all the time.

Then somebody sees something, but that person is a bit less than reliable. You might call them the town crazy, if towns still had crazies like they used to. They bang on your door and tell you they just saw a guy get attacked by a zombie. You tell her to get out. Then you realize this is exactly what happened last time – you didn’t listen to her back when you were a cop, before all this P.I. business, and something bad happened. You hate yourself for it but you listen to what she has to say and, against your better judgment, you start doing some digging for yourself.

And you know what? Maybe, just maybe, you find something.

Hello, Awakening. Nice to meet you. I’d like to introduce you to Alex Eckman-Lawn. He’ll be illustrating the shit out of you in a way that nobody else could. We’re going to be a family now. 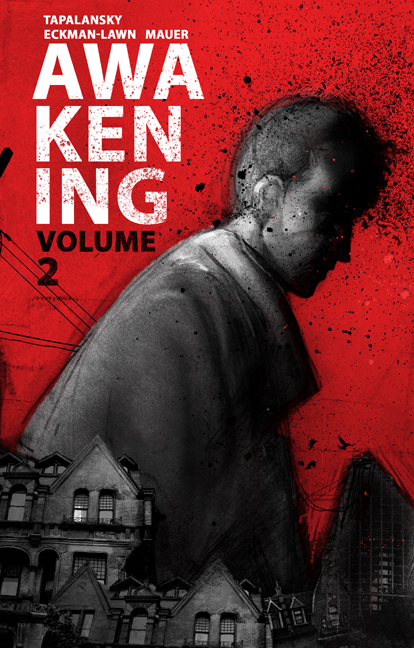 [3]For the rest of the world Awakening Volume 2, the second hardcover volume (published by Archaia, shameless shameless plug) and conclusion of the story just
came out, roughly a year after Awakening Volume 1 and three years after the serialization of the first three chapters in single issue form. Awakening Volume 2 debuted at New York Comic-Con in October and hit comic shops and bookstores just a few weeks ago.

For me, the series has been officially done for three months and unofficially done for a lot longer than that. Getting started on this essay was hard, because I’m deep into other projects now and Awakening, creatively, has been cooling off for some time.

Originally conceived as a 10-issue serial (to be collected later), publisher restructuring and delays led to the difficult decision of releasing the series in two hardcover volumes. There’s talk now about possibly releasing a one-volume edition, since the first volume happens to be just about sold out, so thanks to everyone who took a chance on our weird genre experiment.

As a result of those potential one-volume plans, last week I had the opportunity to make a mock up PDF of what that would look like to get an accurate page count.

I was able to see what the book would look like if it were an uninterrupted story, as it was originally conceived. And you know what? I think I pulled off what I set out to do, that my P.I., town crazy, federal scientist, and local girl/attack survivor bucked the trend the way I’d hoped while still honoring the ideals and staples of a genre
I love.

Now that the second volume is out and the story is done, we’ve gotten reviews from both ends of the spectrum. Some have talked about how innovative and unique the book was, how it’s easy to follow thanks to superb art and a strong narrative. Others have said we didn’t live up to the hype, that we didn’t stray far enough from the genre staples and wound up not fulfilling our mission statement, for lack of a better term. The bottom line is that every review is just one person’s opinion, and I don’t put too much stock in them (alternately, opinions are like assholes, yadda yadda).

Talking about not straying far enough from the genre staples though, I want to make one thing very clear: I did set out to write a zombie story. At the end of the day, though we put a lot of work into making it something different and fresh, it was just as much a love letter as it was a rebellion, much the way I believe the four titles I mentioned earlier were. If somebody tells me I told a zombie story, I’m going to take it as a complement no matter how they meant it.

I had a lot to say about the human condition and a somewhat defective societal norm, about the genre, about our past mistakes and our struggles to overcome them.
I changed some fundamental pieces of the zombie mythos, threw out some red herrings and presented a conflict which I hadn’t seen represented before in a meaningful way within the genre. Were we successful though? Are we going to be counted among the 28 Days Later, The Walking Dead, Dawn of the Dead, and Shaun of the Dead’s of the genre? I don’t know, man. It’d take a lot of hubris for me to say that. But looking at that one-volume mock up PDF, seeing the rebellious seed of a 21-year old me full grown and flush with the living, the dead, and the living dead as it was meant to be presented, looking at Alex’s amazing artwork and flipping through our story from beginning to end, only one thing kept running through my mind:

This is fucking rad.

Hope you dig it. 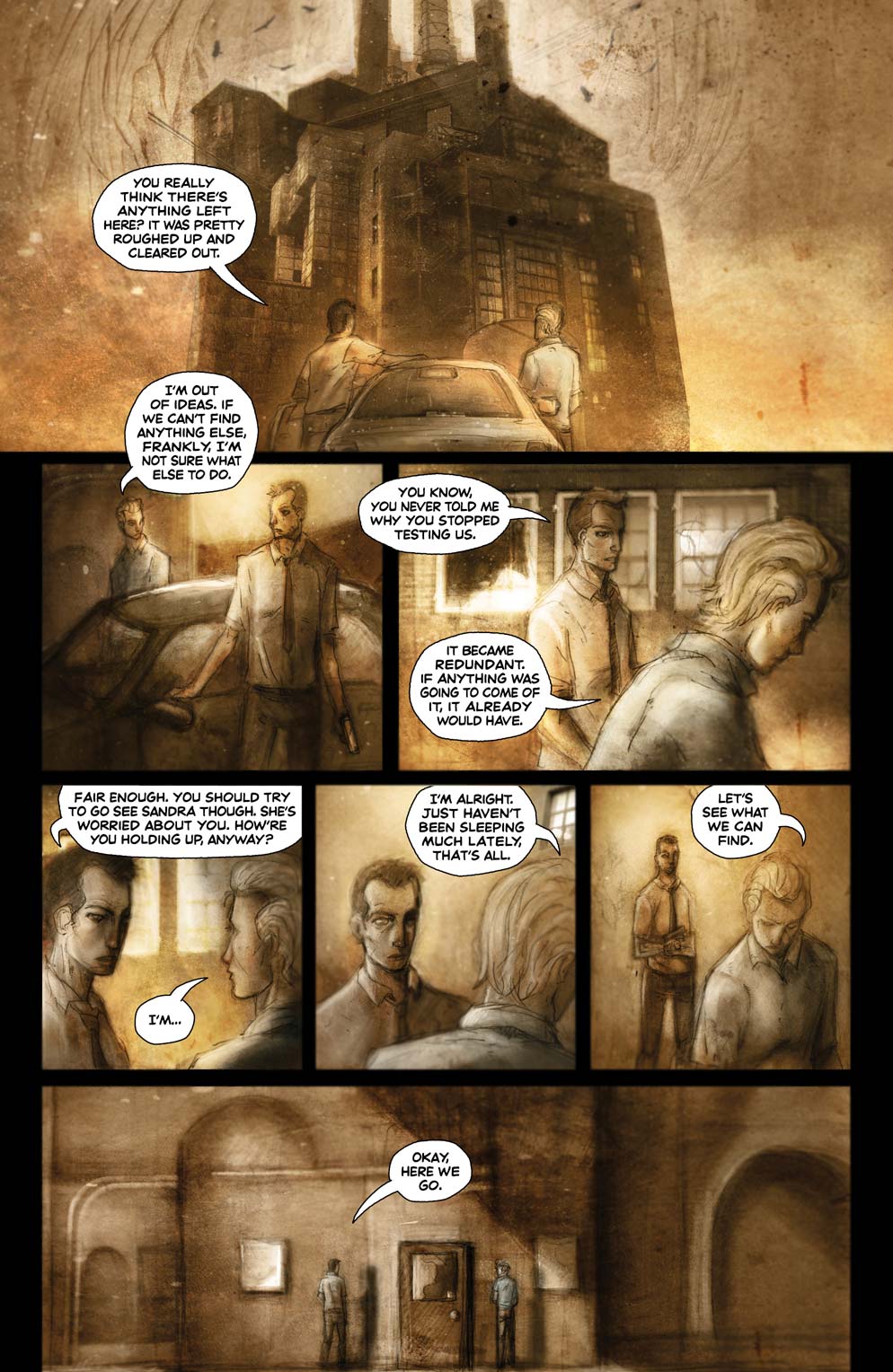 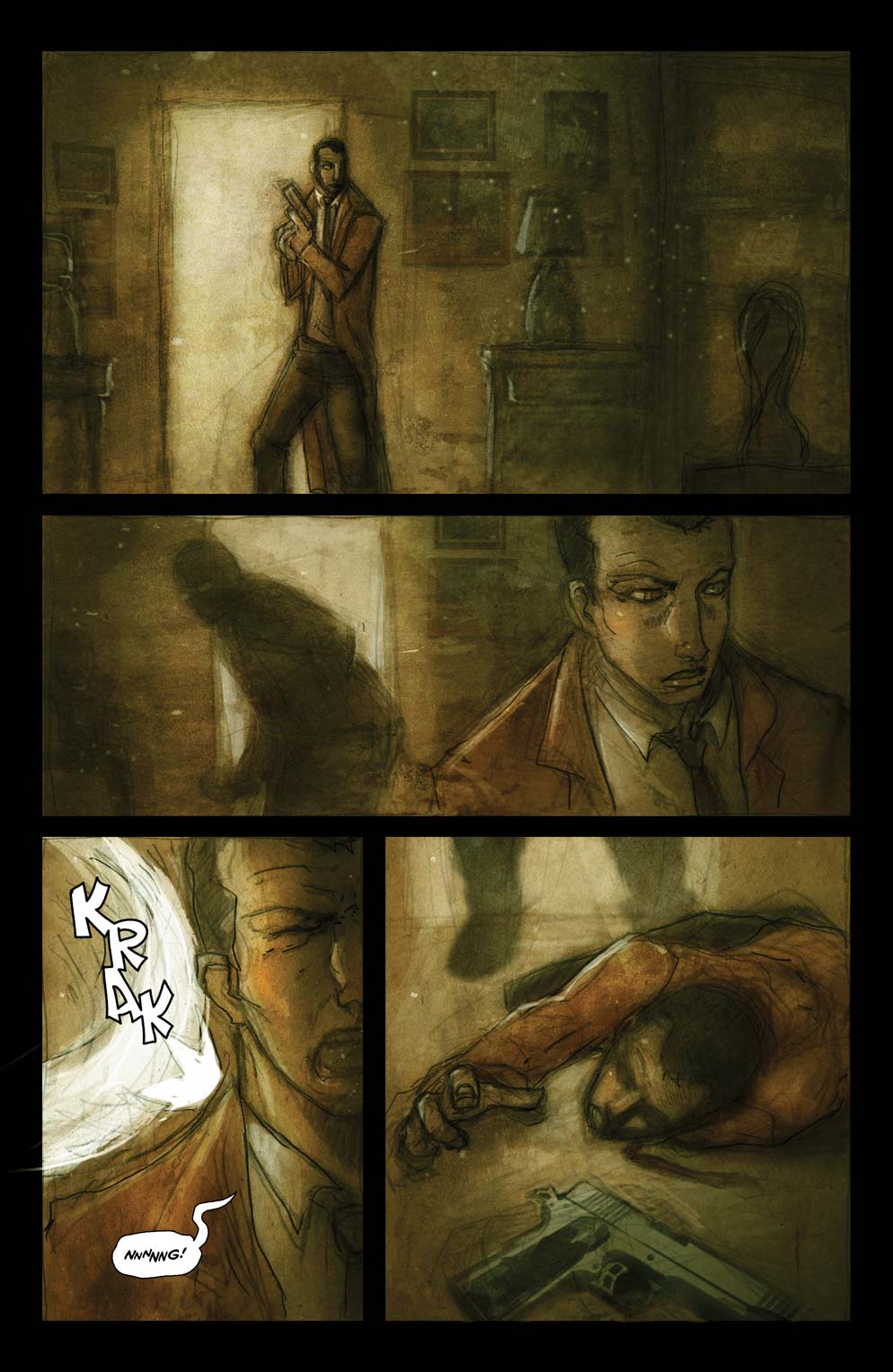 Nick Tapalansky writes comics and other oddities. You can find Awakening Volume 1 (maybe) and Awakening Volume 2 (for sure) online, in bookstores, or harass your comic shop to order it. You can find out more about him and his books, both past and future, and even read complete issues of Awakening at his website, NickTapalansky.com [6]. Follow him on Twitter too at @NickTapalansky [7] where he occasionally says funny things.