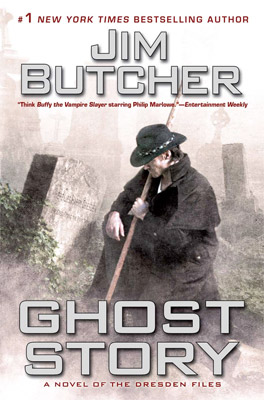 Hot off the presses, Ghost Story is the 13th installment in the Dresden Files series by Jim Butcher. At this point in the series, I would like to point out that if you haven’t read Changes or some of the earlier books, then this review will likely contain ***spoilers***. Be kind to the reviewer, folks.

First things first: due to the way characters are interwoven throughout the fabric of the plot, I would recommend that new readers do not pick up “this” book as the first one. While Butcher does a fine job of trying to facilitate the back story to remind readers who some of the existing characters are, the emotional gut-wrenching reaction that you may have as a reader will fizzle and pop like a dud firecracker.

As the title suggests, this is a Ghost Story. Yes, Harry Dresden is dead. Yes, Harry is a ghost — or is he? No, Harry does not start off with any magical powers from his considerable arsenal of spells, either. What he does have, however, is the ability to solve a mystery through sheer force of will. This particular novel has more worldbuilding in it than some of the previous books, in part because the mechanics of ghosts, shades, etc. are often different from one another. I liked some of the worldbuilding, true, but wanted to know more about what the living were up to. (Truthfully, I could read a whole book just about Murphy…)

Here, Harry’s perspective bobs and weaves through time and matter, to highlight the consequences of the last book’s ending. Remember, Harry didn’t “just” kill a member of the Red Court. He obliterated all of them. In the grand scheme of things, that type of act will leave a mark. The price that Harry had to pay? Was it his life? (Um, can’t tell you that.) So, where can we see the near-devastating effects?

The answer lies with what his friends have had to deal with. In the wake of the destruction of a very old, and very ancient vampire society — there’s a power vacuum. Rules (whether their moral/lawful or not) have been erased. To fill the void, the petty thugs and sorcerers climb over each other for what little power they can gain. New groups, like the Fomor, orchestrate primarily from behind-the-scenes. The vacuum, however, doesn’t just exist because of what Harry did in the last book — there’s also some loose ends that need to be tied up for the “good guys.” Murphy and the others, well… She’s tough-as-nails and I’m happy to see it.

Other characters from previous books also show up in Ghost Story. I enjoyed seeing more of these characters, because they balance Harry’s brashness and magical power out. A few of them, like Mort, drive the plot because Harry’s friends are in the middle of a fight for their lives and the safety of Chicago.

As I mentioned earlier, I feel that Ghost Story would best be appreciated by people who have either followed all of the books or who have, at the very least, read Changes. I’ll be curious to see readers’ reactions to this particular book, because at the end of the day, it seems to me that Harry Dresden will always play by his own rules.

In the end, I felt Ghost Story acted as the catalyst to the next book in the series because of the way some of the plot threads were tied up. To tell you any more — what I liked and what I didn’t — would definitely reveal too much of what Ghost Story is about.