Shane Ivey on the Godlike PDF and paperback edition

After more than 10 years, GODLIKE: Superhero Roleplaying in a World on Fire, 1936-1946 now has a PDF edition [1] with a paperback on the way. Editor and publisher, Shane Ivey, tells us what it was like running the Kickstarter and getting the game ready for these new versions. 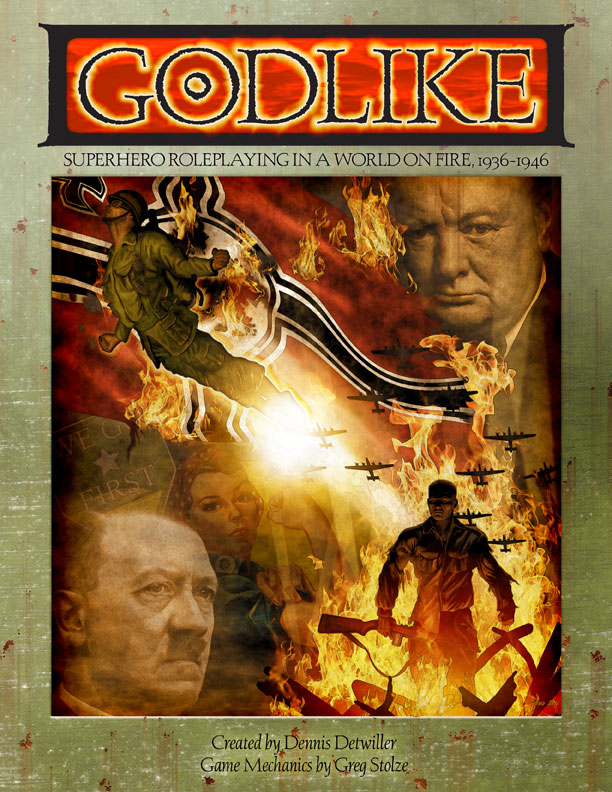 [1]Gamers have wanted GODLIKE in PDF from the very beginning, and gamers made it possible in the Kickstarter project that we held to raise money to get the ancient layout files converted to a modern format and to commission new cover art. We have sent the PDF to Kickstarter backers. Thank you, everyone who supported the project!

Speaking personally for a moment, GODLIKE is to this day one my my favorite roleplaying games of all time. Dennis Detwiller and Greg Stolze did amazing work to not only present a superhero game that felt like no other, but also to create a game that fully embraced its setting. In GODLIKE, the way the rules work shapes the alternate history of world and the way the fictional world works shapes the rules. Playing it consistently evokes the kind of suspense and terror that makes clear that the fictional men and women are at terrible risk at all times — and it’s their willingness to face that risk, not their superpowers, that makes them heroic. In that way GODLIKE honors the courage of real-world soldiers in a very real way.

And check this out. In 10 years of running it at conventions with total strangers, most of whom had never played it or read it before, I have literally never had a bad game of GODLIKE. Granted, there’s a chance that some players pretended to have a good time — but when you run games enough, you can tell when one flounders. I’ve had convention games of Monsters and Other Childish Things, Wild Talents, and Delta Green go bust. Not often, but it’s happened. It’s never happened with GODLIKE.

I just love this game.

Producing this edition required a ton of work. I spearheaded the effort with tremendous help from Allan Goodall and Mike Montesa, as well as a team of volunteer proofreaders. Graphic designer Jessica Hopkins converted the old layout to the new format so I could go in and tinker.

This isn’t exactly a new edition of GODLIKE the way we usually think of game editions. It’s mostly the same text as the original printing — but not entirely. It’s more like Edition 1.5.

I knew early on it would need new cover art to stand out from the 2001 hardcover. Arc Dream regular Todd Shearer designed it with his usual skill and patience. In fact, I sent Todd a detailed first concept, which he executed perfectly; but after revision after revision it just wasn’t quite working for us. I realized eventually that the problem wasn’t with Todd’s work but with my whole idea for the composition. So I asked Todd if he could suggest anything, since he knew the game and its themes as well as anybody. He came back a couple of days later with an image that just knocked my socks off. It got a couple of minor adjustments and then it was done. That’ll teach me to try to tell an artist how to make art!

Inside the covers the essential rules and background are the same as always. But many of the details got updated and corrected along the way. I’ll discuss them chapter by chapter.

The introduction to the game got trimmed a little, mainly for timeliness. Dennis wrote his original justifications for GODLIKE in 2000, when there were fairly few superhero games around. No sooner had GODLIKE appeared in 2001 than a slew of fine superhero games came out, spurred by the D20 boom. So in the new edition I took the liberty of removing a few lines where Dennis bemoaned the state of superhero roleplaying.

Here’s a chapter that got a lot of minor tweaks and one major revision.

In the combat section, I added a section saying explicitly what the rules imply elsewhere, that while Hit Location 10 is usually the head it can also be used for any part of the body where a single wound might kill you in short order — the spine, the heart, internal organs.

I also added a line here and a couple of lines there addressing things that have come up over the years. If an explosive weapon goes off in a bunker, double the Area damage. If your commando needs to sneak up and take out a guard but it’s not quite as easy as murdering a bound victim, use the new sneak attack guidelines.

The biggest revision is in the Character Advancement rules, where we tighten the requirements for spending Will points to improve your skills and powers during play. In a nutshell, you can spend Will on advancement only in a monumental crisis when you’re subjected to the worst kind of stress and pressure. It takes more than just being in the middle of the game and more than just being in combat or highly motivated. And it can be done only once per game session.

The Go First power got a price hike to reflect its effectiveness.

The Multiple Actions power got a complete overhaul, adapted from the revision that Dennis and Greg and I put together (if I’m remembering right) back in 2002 or 2003, soon after the game appeared.

The Battle Fatigue rules got a couple of new lines making explicit how they apply to ordinary, non-Talent humans.

No huge changes here, but a lot of corrections. You won’t find any more mentions of Finland mountains. The French Talent Luc Besont’s nom de guerre, “The Summoner,” is now L’Invocateur, not the nonsensical Le Sumner.

We added a line for anti-tank rockets in the Base Damage Table, and we revised the way land mines work to make them way, way more dangerous. Seriously. You do not want your character to step on a land mine now.

We added the Bren gun and the Sherman Firefly to the British lists and reined in the Tommygun’s range stats in the American section.

The pregenerated characters got a few minor corrections, and I adjusted the layout so each man now occupies his own column of a page to make for easier printing and handing out.

These “D20? rules for GODLIKE, written by Dungeons & Dragons guru Mike Mearls, were eclipsed very early on by the excellent Mutants and Masterminds RPG. But as D20 rules go, I am very fond of GODLIKE’s. I made a few corrections and added a couple of new bits and pieces, mainly to expand how combat actions and attacks work. Nothing really deep.

This is an entirely new chapter of the book, bringing in our favorite rules that have appeared in GODLIKE supplements and campaign books over the years.

Squad Combat: This is a revision of the rules I wrote for Donar’s Hammer in 2003, updated with lessons we’ve learned from playing with them and with similar rules in later games like Wild Talents and Reign over the years. Allan and Mike both said they found these rules indispensible in their own GODLIKE campaigns, which I took as a huge compliment.

Bombardment: Did your Talent team get caught in a zone sighted by the enemy’s big guns? Get your dice and prepare for pain. From Allan Goodall’s Black Devils Brigade.

Minefields: Got a minefield to cross? As above: Dice. Pain. From Allan Goodall’s Black Devils Brigade.

One-Roll Patrols: I love, love, love this set of rules. The GM needs to decide what the environment is like using the campaign construction guidelines in Part 8: The Campaign, and then rolls 11 dice. In about two minutes you have everything you need for a fully fleshed out patrol mission complete with complications. From Allan Goodall’s Black Devils Brigade.

FUBAR!: Another fun set of rules, meant to evoke the weird, crazy things that often happen in the heat of battle. From Allan Goodall’s Black Devils Brigade.

Character Creation: New guidelines for putting together your own character templates if you don’t want to use the TOG Commando template given in the book. It includes two examples: the U.S. Marine Corps Special Instruction School, adapted from Dennis Detwiller’s Talent Operations Command Intelligence Bulletin 3; and the joint U.S.-Canadian First Special Service Force, adapted from Allan Goodall’s Black Devils Brigade.

New Extras and Flaws: Also from Will to Power.

Finally, in the book we recognize the Kickstarter backers who made this new edition a reality. You people are amazing. Thank you.

In about two weeks, we will get the paperbacks from the printer and ship them to backers. Then the paperback will go on sale for the general public and we will bring copies to GenCon 2012 to show off.

Allan Goodall is putting the finishing touches on a new GODLIKE scenario for Black Devils Brigade that we’re going to put online in a few weeks as a further “thank you” to the Kickstarter backers.

James Knevitt is presently editing the first draft of the first part of Mike Montesa’s Day of Days, a full-length GODLIKE campaign that will take soldiers from the carnage of Omaha beach through the Normandy campaign to the liberation of Paris. If you followed Mike’s amazing, heart-wrenching Actual Play report series on RPG.net, this is that campaign. I hope to release it in early 2013.

Allan Goodall is working on our long, LONG-gestating campaign book Operation TORCH, which has been bouncing around half-finished since about 2003. That too will probably see the light of day in 2013.

And now that GODLIKE is available in PDF and paperback, we aim to present more short adventures and supplements along the way.