Guest Design Post: Pawlik on Empire of the Ghouls and More!

Hi, my name’s Kelly Pawlik and I’m one of the contributors to Kobold Press’s Empire of the Ghouls [1], the Underworld Player’s Guide [2], and Underworld Lairs [3]. I was very kindly asked if I wanted to share some experiences and highlights of working on the project, so I’ll get started! 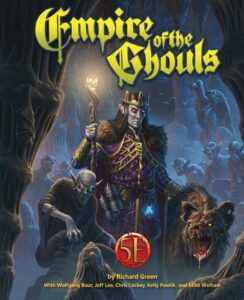 How to Run a Marathon in Two Hundred Words or Less

Empire of the Ghouls was my first experience working on a large scale RPG product and it was eye opening. Design for a mega-adventure / adventure path style product like Empire is kind of like running a relay. When the baton was handed to me I saw the previous adventure left the player characters several hundred miles from where the short outline I’d received had them starting out. This was a bit of a conundrum. The adventurers in “Necropolis of the Ghul King,” the adventure I wrote, are too low of a level to use their own resources to teleport, and word count is a tyrant, so there wasn’t space to start off with an overland travel component and the events it would need to keep it interesting for the players. In the end, the PCs do get to teleport, but doing so might cost them a bit. I’m always wary of giving my players free access to instant travel.

Random Encounters of the Shadowy Road

I got to make a couple random encounter tables for Empire. I know not everyone likes or uses them, but I love adventures that include them, especially when some of the encounters are exploration or role-play focused. The table of random Encounters on the Shadow Road has some great entries, in my opinion. The first listing, a band of devils driving a handful of slaves, offers the players some choices. Do they walk on by? Do they try to free the slaves? If they do, what do they do with them? The Shadow Realm isn’t exactly the friendliest place to leave commoners. Another entry has the adventurers encounter some shadow fey duelists who want to engage in a friendly duel. Again, the players have options, including an opportunity to ask questions or make allies. The last entry I’ll highlight is with a group of eonic drifters from Kobold Press’s Tome of Beasts. I love these things; they’re weird in all the right ways. These creatures will likely teleport away once they get an answer to their question, but they’ll get the players wondering and talking, which is a good thing.

Monster creation is one of my favorite parts of 5e RPG design. There’s an alchemy to putting together a creature that perfectly packages its features and actions with just the right Challenge Rating. I created a quite a few beasts for Empire of the Ghouls, including ghuls which are undead lesser genie-kind, and the Ghul King, the namesake of the adventure I wrote. It took a few stabs, and some suggestions from Meagan Maricle, editor extraordinaire and one of the key reasons Kobold Press’s books are so fracking good, to get the Ghul King where I wanted him. I don’t want to give too much away about the encounter, but I think, and playtesting backs me up, it is exactly what every player fears when they have a showdown with an undead genie noble. It’s a neat capstone to the adventure with a few possible phases and an opportunity for some clever play. 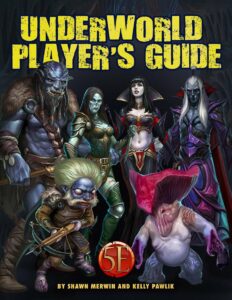 [2]Players love having new toys to try out. Luckily Kobold Press has them covered when it’s time to descend into the Empire of the Ghouls. The Underworld Player’s Guide puts some unusual but fun material into the players’ hands (with their GM’s approval of course). I didn’t write the derro PC race, but my too-brief opportunity to play one, the wild magic sorcerer Gvarla Balerock, has me stoked to unleash her again. The dark trollkin and mushroomfolk also look fun. The Oath of Consumption for the paladin is a gift from me to the players though. You’re welcome! This sacred oath’s tenets alone give me chills: Devour! Debase! Demoralize! Despoil! You really do need all those exclamation marks. These guys start with magical bite attacks at 3rd level, get an aura that allows them to deal all their weapon damage as necrotic damage at 7th level, and 15th level they can eat a nearby corpse to regain health when they hit 0 hit points. When I play one of these, I will have a bag of holding filled with bloody snacks.

The Herald of the Ebon Star rogue archetype revisits the first bit of design work I did for Kobold Press, and it got some dents hammered out and a new coat of paint for the Player’s Guide. Players that join the Ebon Star get a great suite of abilities that add a bit of martial power to the rogue while allowing it to retain the class’s characteristic sneakiness.
Hungering sorcerers play with the class’s sorcery point economy, hopefully allowing them to push themselves a bit further every adventuring day.

The White Necromancy arcane tradition brings a popular concept from the Pathfinder RPG to 5e. I loved this class in its original incarnation; Marc Radle did a fantastic job creating a necromancer that focuses on both life and death. I hope players find my efforts to translate that to the newer ruleset to be satisfying and fun in play.

Thank You and Good Night

I want to take an opportunity to thank Kobold-in-Chief Wolfgang Bauer for allowing me to add to his playground. I also want to thank all the backers that made the Empire of the Ghouls campaign such an amazing success and all the players who have fun playing with the new material in the Underworld Player’s Guide. I offer a half-hearted “I’m sorry” in advance if your character meets their end in the “Necropolis of the Ghul King.” Finally, thank you to the hosts of Flames Rising for allowing me to share some of my experiences.