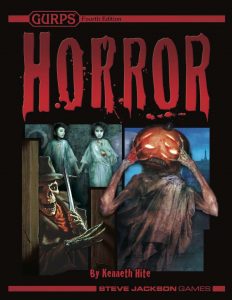 Did you know that Steve Jackson Games GURPS corebooks and supplements are now available on DriveThruRPG.com? The publisher has recently uploaded several new titles, and there’s one supplement in particular we were happy to see: GURPS Horror Fourth Edition [1].

GURPS Horror Fourth Edition is the latest incarnation of one of the most popular GURPS supplements ever, and now it’s been given a new lease on unnatural life by horror master Kenneth Hite. Its time-tested advice on running scary campaigns has been expanded to include current trends and tropes, showing you how to run everything from old-fashioned Gothic and supernatural horror to the latest J-horror, survival horror, and torture horror. The famous bibliography of unspeakable tomes and frightening films has grown to match. And the monsters return with unpleasant friends, as monsters inevitably do — all with GURPS Fourth Edition racial templates that let you use them as foes, as sinister Allies and cursed Alternate Forms, and even as PCs! Add the new and disturbing powers, the expanded rules for madness and corruption, and countless other updates, and you have everything you need to drag your horror campaign screaming into the 21st century.

The great thing about GURPS Horror is that it’s an expansive repository of modern horror tips, tricks, techniques, and knowledge. Though this is designed for GURPS, the ENnie award-winning supplement is a good addition to your gaming library if you plan on running a modern horror game. If you’re curious about this supplement, check out this GURPS Horror Fourth Edition review [2] from our archives. Happy haunting!