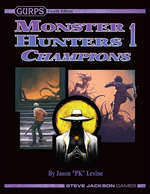 Monsters: can’t live with them, and . . . well, it seems like there’s days where you’re spending all your time killing them.  Particularly when it comes to horror gaming.  If you’re not out staking vampires, you’re blasting zombies or shotgunning werewolves.

There are many table top RPGs that dip their toe into the horror genre with great aplomb.  And when it comes to “regular people” (AKA Player Characters) taking up arms and blasting apart things that go bump in the night, three or four titles instantly come to mind.  And one of those titles is GURPS–as if you didn’t know.

For the uninitiated, GURPS stands for “Generic Universal Role Playing System”, which is a fancy way of saying, if you can dream it up, you can play it using GURPS.  First published in 1986, it came out at a time when nearly all RPG systems were tailored to a particular genre.  GURPS, like a few systems before it, allowed you to create a basic character that could, with very few modifications, play in any setting from fantasy to cyberpunk to space opera to . . . well, to killing monsters in a horror environment.  To truly fit one into the Monster Hunter niche, GURPS has three supplements that takes you from the A of modding your character to the Z of whacking out preternatural and supernatural bad guys.

First on the list is the Champions supplement, 66 pages of information on what you need to do to get your character into the world.  One of the things said right up front is if you are making Monster Hunter characters, it’s best to use the Character Templates, AKA the pre-generated characters; the phrase they use is “To preserve this uniqueness, the GM is encouraged to make templates mandatory–” which pretty much gives one no BS about what the system is looking for.

Now, why are they saying this?  Because the templates are for characters that are super bad.  Every template is made around a “legendary hero” type of 400 points, and within those 400 points you’re getting a character that can kick butt and take souvenirs with the best of the Chosen Ones and still leave room for customization.  (Unless you’re a Munchkin, in which case you look upon these templates and declare them “lame.”  But, of course.)

Given is you’ll have a good list of skills, wildcard skills, advantages and disadvantages, and all the nice, groovy beyond-natural stuff (like magic and psi abilities) to customize your character to be the monster hunter they need to be.  There is also a great selection of gear from which to pick, with the additional suggestion that if players want something “else” with which to fight said Minions of Hell, they can either pick through the GURPS High-Tech supplement (lots of very nasty things that go bang-bang, but liable to really slow down character creation as players leaf through 256 pages of high-tech death), or drop a few bucks and pick up the GURPS Loadouts: Monster Hunters supplement so you have a nice, neat synopsis of items used to bring about one’s permanent demise.

The feeling presented within the Champions supplement is that when one game plays Monster Hunters, the play is fast, furious, and cinematic.  You want to make the game fly, though I suppose finding the PCs sitting around a library tossing witty quips at each other is also a good way to pass the time when they’re not out turning the shambling masses into formless organic paste. 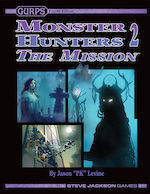 Up after Champions comes The Mission, and this is where the rubber hit the road running.  This gives the players all the whys and wherefores of monster hunting; at the very beginning the supplement even recommends going though this book first so the players can get an idea about what sort of character they might decide to run.  Wait: reading about how to do something before deciding who you might build?  Ah, hahahaha!  That’s a good one!  But, seriously . . . having some idea about how to go about hunting these wee nasty beasties is good advice, and while some players might be content to piss on the idea put forth herein The Mission, that doesn’t mean everyone should.

Simply put, a lot of players have no idea of how to go about hunting creatures that will rip your head off without so much as working up a sweat, and any information that can make that chore easier is a good thing for all involved.  Or, if you’re a GM you can set your players up, have them collect in a warehouse, and surround them before dropping them like a bad habit, but I’d recommend doing that . . . at least before the third session.  Death is a good way of getting across the point that one should be prepared–

Another good part of The Mission is how to Look Cool While Kicking Ass.  Other games in the monster hunting genre has made a point of saying, “Make it super smooth when you do something and you get points” and The Mission is no different.  After all, anyone can say, “I look for the vampire in the room; I roll my dice . . . I hit.  Do I see him?”; it’s simple and to the point.  And boring as hell.  As a player and/or GM, wouldn’t you rather sit witness something more along the lines of “I kick in the freakin’ door and spy three people in the room.  Screw it: I toss a Molotov in the middle of the room and wait for someone to totally freak.  And when they do, I’ll smoke ’em–“.  Yeah.  More  to the point, and it tells you everything about how the scene should play out.

And it’s not just all about cinematic combat, but fighting smart; using gadgets to your advantage; how not to get killed when there is a chance magic will be used against you.  Sometimes you wanna kick in that door and blast everything in sight–and other times you wanna tip-toe about before stabbing a vampire in the eye with an icicle.  (Sure it won’t kill them, but admit–you wanna do it now.)

The Mission wraps up with a section for the GM giving them advice on how to deal with the player characters.  Sure, you can lob softballs at them and watch them cut a swath through them, or you can roll out the Big Boss first thing and watch them crap their pants.  Finding the right balance is good for both side, and a GM will find the information helpful. 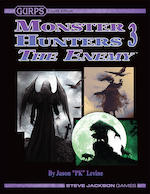 As you can expect, there are a lot of enemies out there for monster hunters, and in this supplement, most of them tend to be just a little more powerful than your 400 point player character.  Hey, gotta work for that supper, Sparky: ain’t no such thing as a free lunch.  You got your undead; you got your spirits (which include demons and angels . . . what, they’re the good guys?  Re-watch The Prophecy and get back to me; you got your creatures that are just your normal, crazy, living creatures that will rip you a new one and dance with your entrails wrapped around them if you let them.  And last group are those humans who have gone over the edge–your cultists, your wild witches, your home made experiments, and folk here and there who may or may not look like a X-Man–and are in need of being put down.  You thought it was all gonna be sexy vampires and hairy wolf-boys with bad tattoos?  Hey, sometimes Buffy comes back from the store a lotta beans short of a Burrito Supreme and ya gotta take her out, you know?

With these three supplements you can take GURPS into that realm where few mortals venture and, if you’re lucky, your characters will not only be able to enter but find their way home–body and minds reasonably intact.  Go on.  Sharpen those stakes and load up the shotgun with dragon fire rounds–it time to go kill some monsters.

You know you wanna do it.