FlamesRising.com is thrilled to present you with an exclusive preview from Steve Jackson Games as part of our publisher theme week. Today, we take a peek at the upcoming GURPS Infinite Worlds: World of Horror supplement that offers new settings to bring terror to your gaming table.

GURPS Infinite Worlds: Worlds of Horror will detail six alternate Earths where history has taken a turn for the terrifying. Designed as being light on rules and heavy on atmosphere, Worlds of Horror should prove fascinating for anyone who wonders what might have been . . . more horrific.

This preview material has been taken from one of those worlds, called Taft-1. The year is 1962, and Stalin still lives. And he has worse allies than Hitler.

For anyone hoping to visit Taft-1, a ***Spoiler Alert*** is in effect for this whole preview.

The Secret History of the Cold War

Stalin had long known that there was no God. It wasn’t, however, until he correlated some of the wilder tales from his Georgian hill-country home with the results of the 1927 Tunguska expedition and the secret diaries of Rasputin that he knew that there were, nonetheless, gods. Gods who offered great power to those who signed their name “in the book of Azathoth.” All it required was cruelty and will – and Stalin had those in abundance.

A secret directorate (the “Ultraviolet Directorate” Upravlenie Ultravioletovie, or UPUL) of the OGPU fanned out across the Soviet empire, looting libraries and museums, torturing Siberian shamans and elderly monks, stealing what they could from foreigners, always looking for hints of the elder mythology that now obsessed their steel tsar. In the aftermath of World War II, this trickle of data became a flood, as the Ahnenerbe archives of Nazi occult research fell into Soviet hands along with Berlin. Stalin now knew the Names to call on when the stars were right, the places of power where They scrabbled at the edge of space, the truth that mankind was, just as Marx had promised, the puppet of vast, impersonal forces. And he knew how to bend those forces to his implacable will.

Truman might have stopped him, but Alger Hiss painted a certain hexagram in the Oval Office that killed the Cold Warrior. Stalin gladly offended Mao by holding Sinkiang and adding Tibet to his prizes in the confusion of 1949. With the invasion of Afghanistan in 1951, he completed his conquest of the earthly gates to Leng; in 1957, the Vostok Antarctic colony secured the approaches to Kadath in the Cold Waste. Egypt, older than human history, fell to Nasser, who built his “United Arab Republic” in Cairo, Damascus, and Sana’a – cities where Alhazred studied – on Soviet rockets and bayonets.

A hundred doors slowly crack open, all across the Soviet sphere. Surgeons captured in Treblinka probe the brains of political prisoners and Red Army volunteers, seeking the gateways in pineal space. Armies of slaves work gulag mines to supply the fungoid, alien Yughotiy with rare Siberian minerals. Thousands die in screaming agonies to placate Nyarlathotep. Antarctic explorers dig up Elder technologies; physicists in isolated Siberian laboratories go mad trying to utilize them. Certain inquisitive strangers with unlikely knowledge of the past and future answer insistent questions in their turn in the Lubyanka basement. Over them all, Stalin’s will drives forward. The New Soviet Man will be the next Great Race on Earth. It will be the only Great Race. 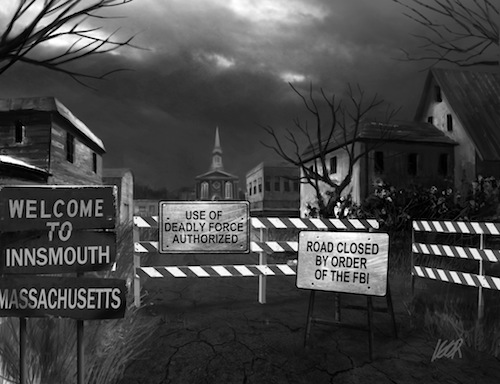 Campaigning in Taft-1: The Doom That Came to Innsmouth

In February of 1928, the Bureau of Investigation coordinated Operation SAMSON, a joint project of the Treasury Department and the U.S. Navy to destroy the town of Innsmouth, Massachusetts. The archives and artifacts of Operation SAMSON – and perhaps even some of the prisoners removed from Innsmouth to an internment camp in Manzanar, California – survive. (Did FDR or President Taft release those prisoners? Move them? Did he even know they existed?) Someone in the U.S. government wants to find them.

Someone in the U.S. government has discovered, or Dreamed, what the real Soviet threat is. FBI agents have confiscated the research papers of Professor George G. Angell, of Brown University. Secret Servicemen have seized enigmatic gold statuary from small museums all along the New England coast. U.S. Navy submarines patrol a desolate stretch of the South Pacific with active sonar. Someone in the U.S. government wants to find their own Old One to counter Stalin’s alliance with Azathoth. They want to make a treaty with the Deep Ones (‘A’Nthleioi, Infinite Worlds, p. 130), to pit them against the Yughotiy. They want to close the Mythos gap.

The PCs are American government agents or military intelligence officers. They might be part of this secretive cabal, trying to build a balance of terror to keep America alive. In that case, this becomes a Quest campaign (with strong psychological horror overtones) as they search for evidence, battle mysterious Soviet-backed horrors, and try to achieve a lasting peace with an alien intelligence. Or they might realize that any interaction with such forces irretrievably corrupts everything America survives to represent: the only response to such monsters is more and bigger torpedoes. This version of the campaign has two Nemeses: both the Esoteric Order of Dagon (the Deep Ones’ front network within America) and the misguided patriots who would sell their country to Cthulhu. In either version, Senator John F. Kennedy (D-Massachusetts) remains an ambiguous figure: Navy hero, Mafia connections, student of history, rumored to have presidential ambitions as well as certain . . . appetites . . .