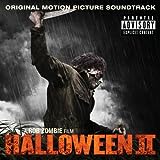 My experience watching Rob Zombie’s Halloween 2 was similar to how I imagine it must have been when George Foreman discovered he was as adept at selling grills as he was putting people to sleep with his fists.  In other words, it was not what I expected.   In fact I expected to hate it.  I was so disgusted with Zombie’s unfortunate stab [2] at remaking, re-imagining, and regurgitating John Carpenter’s 1978 seminal slasher that for a while I became the elderly curmudgeon of horror movie journalism.  I may have even yelled at some kids to stay the hell off my lawn.

However, this time it wasn’t long before I came to the slightly confusing realization that I wasn’t hating this dreaded sequel, an emotion I felt specifically entitled to given the majority of films I’ve suffered through lately, but rather I was riveted by Rob Zombie’s brutal, gritty, and most importantly, original chapter in one of horror’s most important and longest running series.

Halloween 2 begins immediately after the events of Zombie’s remake and it has nothing to do with the original sequel from 1981.  After watching Michael Myers escape the coroner’s van in a gnarly tone-setting opening sequence we skip ahead nearly a year.  Laurie Strode (Scout Taylor-Compton) now lives with Annie (Danielle Harris) and her father, Sheriff Brackett (Brad Dourif) in their rural farmhouse just outside Haddonfield.  Although, everyone assumes that Michael Myers is dead and that his body will eventually turn up, Laurie and Annie bear the scars, both physical and psychological, from their encounter with Myers the previous year.  Suffering from horrifying nightmares, Laurie has embraced a darker lifestyle, immersing herself in the local punk scene and doing an abundance of hard partying.

Meanwhile, Dr. Loomis heads toward Haddonfield on a book tour that doesn’t sit well with much of the public.  He’s accused of profiteering off of the carnage caused by Myers, his former patient, and his book contains a sleazy and irresponsible betrayal to boot, albeit one that I won’t give away here.

Coincidentally, a certain William Shatner-masked lunatic is also making his way back home for Halloween.

Here I find Zombie’s take on this well-trod mythos to be most compelling.  Michael Myers (Tyler Mane) isn’t just another generic horror icon who steps out of a vacuum and into Haddonfield to kill teenagers, only to repeat it next year.  Zombie’s Myers is a real character who’s encumbered by the same reality as the rest of the world.  He’s been surviving in the woods and farms outside of town, stealing food to get by.  When he finally makes his way to town, he’s wearing a hooded parka and sporting a long tangled mane of hair and a huge filthy beard.  These seemingly inconsequential attributes actually manage to contribute an alarming reality to such an identifiable character.

This Michael Myers is a monster of a man, completely psychopathic, probably schizophrenic, and suffering from deranged hallucinations and delusions, which are creatively represented by Zombie’s trademark dreamscape imagery and strategic juxtapositions.  And when Myers dons his tattered and iconic mask he’s in kill-mode, dispatching victims in a truly frightening and ultra brutal manner.

The cast is packed full of good performers that run the gamut of experience.  There are genre pros such as Brad Dourif, Caroline Williams, and Danielle Harris, television standouts such as Deadwood’s Dayton Callie and Heroes’ Brea Grant, veteran stars including Malcolm McDowell and Margot Kidder, and even Weird Al Yankovic playing himself in a small cameo.  It’s a cavalcade of character acting and it gives the movie a depth that enriches its realistic tone and gritty aesthetic.

Once again, KNB’s Wayne Toth is back to provide Rob Zombie with the messy innards and there are enough here to satisfy those of you who are of the sick and twisted variety.  The gore isn’t over the top, but rather it’s an extension of Zombie’s realistic portrayal of extreme violence which lends the gore a context that enhances its effectiveness.  There are more than enough squirm-inducing shots and there should be plenty more once the unrated DVD rolls out in a matter of months.

It appears that Zombie has learned from the mistakes he made with his first attempt at Halloween.  Without the abysmal first act of his 2007 remake, that movie may have been tolerable.  Instead he went for an elaboration of the original material wherein we’re forced to get to know one of film’s most evil monsters as a cute and misunderstood little kid.  The result is a mess.  The relevant information contained in that remake is compressed and clearly represented here in Halloween 2 as exposition.   This time the result is a tight and fast paced blend of horror, social commentary, and pop culture and I suspect it’s the movie Zombie wanted to make originally, had he not been confined by the enormous expectations that accompany Carpenter’s original film.

I’ve proclaimed this before and I’ll do it again here: Rob Zombie has the potential to be a true master horror filmmaker.  His existing catalogue is a highlight reel of brilliant components, but he has yet to put it all together and make a film that represents his obvious talent.  Halloween 2 comes close to achieving that.  It feels informed by the entire breadth of past horror films that have worked and have thus become important.

Halloween 2 is not without flaws.  Rob Zombie is still a work in progress with serious holes in his game and some of these are apparent here.  The most notable is his inability to consistently coax performances from his actors that are tonally organic.  However, I can’t help but feel that the more experience he gets behind the camera (he’s sure to get plenty more opportunities), the better his results will be.  I’m hoping that the expectation-defying Halloween 2 is Rob Zombie’s first significant step in that direction.